1In those days the Philistines gathered their forces to fight against Israel. Achish said to David, “You must understand that you and your men will accompany me in the army.”
2David said, “Then you will see for yourself what your servant can do.”
Achish replied, “Very well, I will make you my bodyguard for life.”


Saul and the Medium at Endor

3Now Samuel was dead, and all Israel had mourned for him and buried him in his own town of Ramah. Saul had expelled the mediums and spiritists from the land. 5When Saul saw the Philistine army, he was afraid; terror filled his heart. 6He inquired of The LORD, But The LORD Did Not Answer him by dreams or Urim or prophets. 7Saul then said to his attendants, “Find me a woman who is a medium, so I may go and inquire of her.”

“There is one in Endor,” they said.

8So Saul disguised himself, putting on other clothes, and at night he and two men went to the woman. “Consult a spirit for me,” he said, “and bring up for me the one I name.”

9But the woman said to him, “Surely you know what Saul has done. He has cut off the mediums and spiritists from the land. Why have you set a trap for my life to bring about my death?”

10Saul swore to her By The LORD, “As Surely As The LORD Lives, you will not be punished for this.”

11Then the woman asked, “Whom shall I bring up for you?”

“Bring up Samuel,” he said.

12When the woman saw Samuel, she cried out at the top of her voice and said to Saul, “Why have you deceived me? You are Saul!”


“I see a ghostly figure coming up out of the earth.”

“An old man wearing a robe is coming up,” she said.

Then Saul knew it was Samuel, and he bowed down and prostrated himself with his face to the ground.

“Why have you disturbed me by bringing me up?”

“I am in great distress,” Saul said. “The Philistines are fighting against me, and GOD Has Departed From me. HE no longer Answers me, either by prophets or by dreams. So I have called on you to tell me what to do.”

20Immediately Saul fell full length on the ground, filled with fear because of Samuel’s words. His strength was gone, for he had eaten nothing all that day and all that night.

21When the woman came to Saul and saw that he was greatly shaken, she said, “Look, your servant has obeyed you. I took my life in my hands and did what you told me to do. 22Now please listen to your servant and let me give you some food so you may eat and have the strength to go on your way.”

But his men joined the woman in urging him, and he listened to them. He got up from the ground and sat on the couch.

24The woman had a fattened calf at the house, which she butchered at once. She took some flour, kneaded it and baked bread without yeast. 25Then she set it before Saul and his men, and they ate. That same night they got up and left.

The story has led to much discussion whether there was a real appearance of Samuel or not.

On the one hand, the woman's profession, which was forbidden by the Divine Law (Deuteronomy 18:11), the refusal of GOD to answer Saul by any Divinely constituted means, the well-known age, figure, and dress of Samuel, which she could easily represent herself, or by an accomplice—his apparition being evidently at some distance, being muffled, and not actually seen by Saul, whose attitude of prostrate homage, moreover, must have prevented him distinguishing the person though he had been near, and the voice seemingly issuing out of the ground, and coming along to Saul—and the vagueness of the information, imparted much which might have been reached by natural conjecture as to the probable result of the approaching conflict—the woman's representation—all of this has led many to think that this was a mere deception. 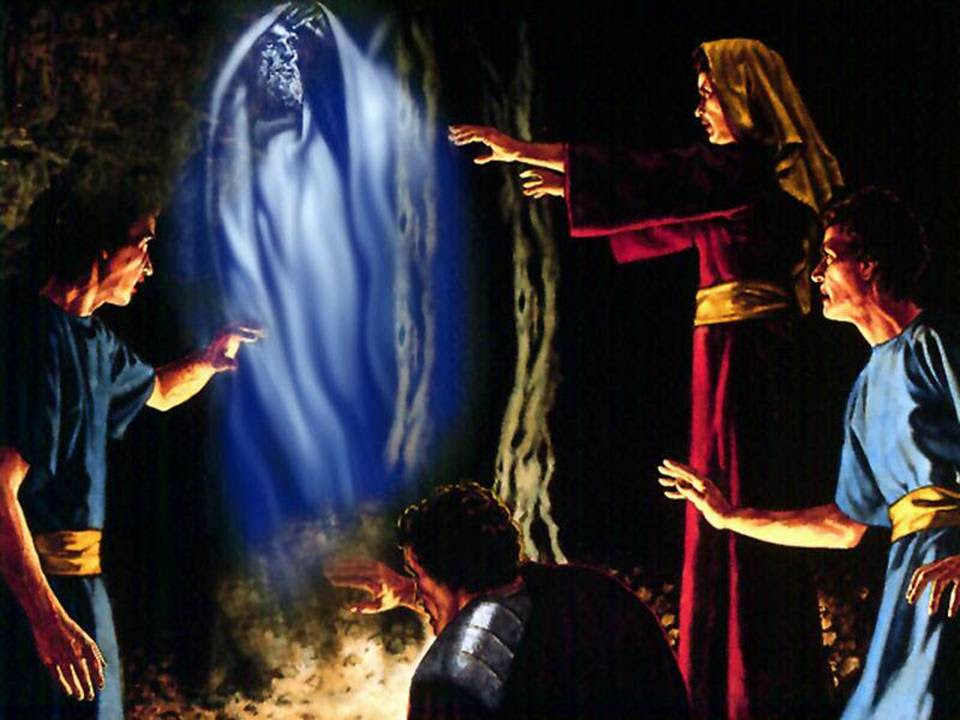 On the other hand, many eminent writers (considering that the apparition came before her arts were put in practice; that she herself was surprised and alarmed; that the prediction of Saul's own death and the defeat of his forces was confidently made), are of opinion that Samuel really appeared. 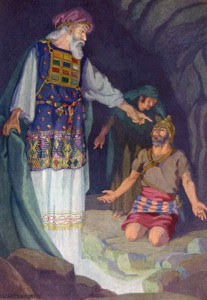 I do believe he was Samuel.