Ruth Is Among The Human Ancestors Of JESUS CHRIST, The SON Of GOD


Naomi Loses Her Husband and Sons

1In the days when the judges ruled,a there was a famine in the land. So a man from Bethlehem in Judah, together with his wife and two sons, went to live for a while in the country of Moab. 2The man’s name was Elimelek, his wife’s name was Naomi, and the names of his two sons were Mahlon and Kilion. They were Ephrathites from Bethlehem, Judah. And they went to Moab and lived there.

3Now Elimelek, Naomi’s husband, died, and she was left with her two sons. 4They married Moabite women, one named Orpah and the other Ruth. After they had lived there about ten years, 5both Mahlon and Kilion also died, and Naomi was left without her two sons and her husband.

Naomi and Ruth Return to Bethlehem

6When Naomi heard in Moab that The LORD Had Come to the aid of HIS people by providing food for them, she and her daughters-in-law prepared to return home from there. 7With her two daughters-in-law she left the place where she had been living and set out on the road that would take them back to the land of Judah.

8Then Naomi said to her two daughters-in-law, “Go back, each of you, to your mother’s home. May The LORD Show you Kindness, as you have shown kindness to your dead husbands and to me. 9May The LORD Grant that each of you will find rest in the home of another husband.”


Then she kissed them goodbye and they wept aloud 10and said to her, “We will go back with you to your people.”

11But Naomi said, “Return home, my daughters. Why would you come with me? Am I going to have any more sons, who could become your husbands? 12Return home, my daughters; I am too old to have another husband. Even if I thought there was still hope for me—even if I had a husband tonight and then gave birth to sons— 13would you wait until they grew up? Would you remain unmarried for them? No, my daughters. It is more bitter for me than for you, because The Lord’s Hand Has Turned against me!”

14At this they wept aloud again. Then Orpah kissed her mother-in-law goodbye,

but Ruth clung to her. 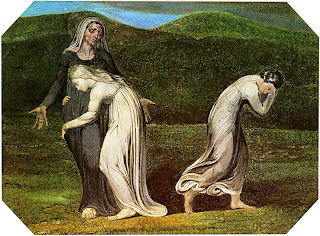 15“Look,” said Naomi, “your sister-in-law is going back to her people and her gods. Go back with her.”

16But Ruth replied, “Don’t urge me to leave you or to turn back from you. Where you go I will go, and where you stay I will stay.


Your people will be my people and your GOD my GOD. 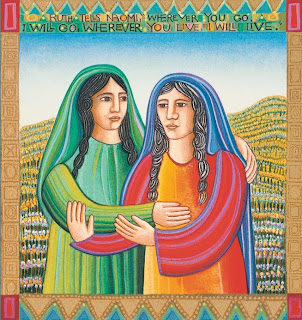 17Where you die I will die, and there I will be buried. May The LORD Deal With me, be it ever so severely, if even death separates you and me.” 18When Naomi realized that Ruth was determined to go with her, she stopped urging her. 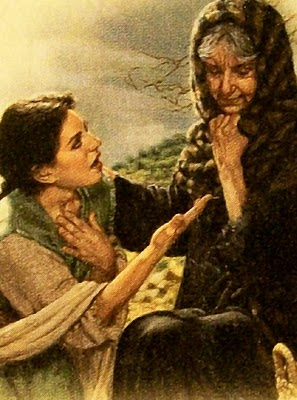 19So the two women went on until they came to Bethlehem. When they arrived in Bethlehem, the whole town was stirred because of them, and the women exclaimed, “Can this be Naomi?”

22So Naomi returned from Moab accompanied by Ruth the Moabite, her daughter-in-law, arriving in Bethlehem as the barley harvest was beginning.

The Book of Ruth is historically important as giving the lineage of David through the whole period of the rule of the Judges Ruth 1:1, i.e. from Salmon who fought under Joshua, to "Jesse the Bethlehemite" 1 Samuel 16:1; and as illustrating the Ancestry of "JESUS CHRIST, The SON of David," WHO "Was Born in Bethlehem of Judea" Matthew 1:1; Matthew 2:1.

The care with which this narrative was preserved through so many centuries before the Birth of CHRIST is a striking evidence of the Providence of GOD, that "known to GOD are all His Works from the beginning of the world." The genealogy with which the Book closes Ruth 4:18, is also an important contribution to the chronology of Scripture history. We learn from it, with great distinctness, that Salmon, one of the conquering host of Joshua, was the grandfather of Obed, who was the grandfather of king David; in other words, that four generations, or about 200 years, span the "days when the Judges ruled."

But the Book of Ruth has another interest, from the charming view it gives us of the domestic life of pious Israelites even during the most troubled times. If we only had drawn our impressions from the records of violence and crime contained in the Book of Judges, we would have been ready to conclude that all the gentler virtues had fled from the land, while the children of Israel were alternately struggling for their lives and liberties with the tribes of Canaan, or yielding themselves to the seductions of Canaanite idolatry.

But the Book of Ruth, lifting up the curtain which veiled the privacy of domestic life, discloses to us most beautiful views of piety, integrity, self-sacrificing affection, chastity, gentleness and charity, growing up amidst the rude scenes of war, discord, and strife.

Ruth, from its contents, as anciently by its place in the canon, belongs to the Book of Judges, and is a kind of appendix to it. In the present Hebrew Bible it is placed among the Kethubim (Hagiographa - it means “Sacred Writings”), in the group containing the Song of Solomon, Ruth, Lamentations, Ecclesiastes, and Esther; but in the Greek Septuagint and the Latin Vulgate it occupies the same place as in our English Bibles, which was its ancient place in the Hebrew Bible.

The language of the Book of Ruth is generally pure Hebrew. But there are words of Aramaic form and origin, and other expressions unique to the later Hebrew. The inference would be that, the Book of Ruth was composed not before the later times of the Jewish monarchy; and this inference is somewhat strengthened by the way in which the writer speaks of the custom which prevailed in former times in Israel Ruth 4:7. Other expressions, which the book has in common with the Books of Samuel and Kings, and a certain similarity of narrative, tend to place it upon about the same level of antiquity with those Books.

The Books of the Old Testament, to the contents of which reference seems to be made in the Book of Ruth, are Judges, Leviticus, Deuteronomy, Genesis, 1 and 2 Samuel, and perhaps Job. Ruth is not quoted or referred to in the New Testament, except that the generations from Hezron to David in our LORD's Genealogy seem to be taken from it.

No mystical or allegorical sense can be assigned to the history; but Ruth, the Moabitess, was undoubtedly one of the first-fruits of the ingathering of Gentiles into the Church of CHRIST, and so an evidence of GOD'S gracious purpose in CHRIST, “also to the Gentiles to grant repentance unto life” and the important evangelical lesson is as plainly taught in her case, as in that of Cornelius,


“That GOD Is no respecter of persons, but in every nation he who fears GOD, and works righteousness, is accepted of HIM.”

The great doctrine of Divine Grace is also forcibly taught by the admission of Ruth, the Moabitess, among the Ancestry of our LORD JESUS CHRIST.

Moabites in the Bible


According to Genesis, the Moabites were related to the Israelites, with both peoples tracing their descent back to a common ancestor, Terah, who is named as the father of Abraham and Haran, and Haran being the father of Lot. (Genesis 19:30-38)


Lot's son Moab is described as being born from an incestuous relationship between Lot and his eldest daughter (Genesis 19:37) after the destruction of Sodom. The Moabites are described as descendants of Lot's son Moab.  The Moabites were to be excluded from the assembly of JEHOVAH worshipers, because: “They did not come to meet you with food and drink when you were on your way out of Egypt, and even hired Balaam, son of Beor, to oppose you by cursing you.” (Deuteronomy 23:3-5)


The Israelites were allowed to harass Moab, but were forbidden to wage war on them, so they defeated Midian as a result of the advice that Balaam gave that led to a plague in punishment for the worship of idols at Baal Peor. Only the men of Moab and Ammon were forbidden to marry into the Israelite nation, but the women were permitted to convert without restriction. That is why King David who descended from Ruth could be king and the mother of his grandson Rehoboam, son of Solomon was from Ammon.