We Should Ask The LORD'S WILL Before We Act


The Israelites Punish the Benjamites


1Then all Israel from Dan to Beersheba and from the land of Gilead came together as one and assembled Before The LORD in Mizpah. 2The leaders of all the people of the tribes of Israel took their places in the assembly of GOD’S people, four hundred thousand men armed with swords. 3(The Benjamites heard that the Israelites had gone up to Mizpah.) Then the Israelites said, “Tell us how this awful thing happened.”

4So the Levite, the husband of the murdered woman, said, “I and my concubine came to Gibeah in Benjamin to spend the night. 5During the night the men of Gibeah came after me and surrounded the house, intending to kill me. They raped my concubine, and she died. 6I took my concubine, cut her into pieces and sent one piece to each region of Israel’s inheritance, because they committed this lewd and outrageous act in Israel. 7Now, all you Israelites, speak up and tell me what you have decided to do.” 8All the men rose up together as one, saying, “None of us will go home. No, not one of us will return to his house. 9But now this is what we’ll do to Gibeah: We’ll go up against it in the order decided by casting lots.10We’ll take ten men out of every hundred from all the tribes of Israel, and a hundred from a thousand, and a thousand from ten thousand, to get provisions for the army. Then, when the army arrives at Gibeah in Benjamin, it can give them what they deserve for this outrageous act done in Israel.” 11So all the Israelites got together and united as one against the city. 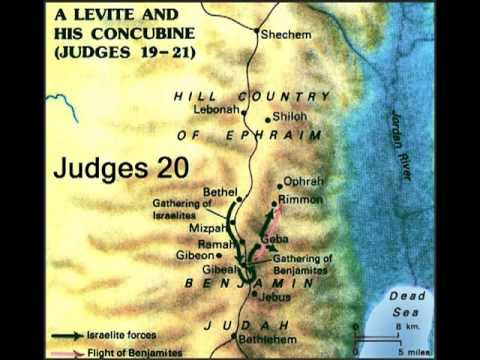 12The tribes of Israel sent messengers throughout the tribe of Benjamin, saying, “What about this awful crime that was committed among you? 13Now turn those wicked men of Gibeah over to us so that we may put them to death and purge the evil from Israel.”

But the Benjamites would not listen to their fellow Israelites. 14From their towns they came together at Gibeah to fight against the Israelites. 15At once the Benjamites mobilized twenty-six thousand swordsmen from their towns, in addition to seven hundred able young men from those living in Gibeah. 16Among all these soldiers there were seven hundred select troops who were left-handed, each of whom could sling a stone at a hair and not miss.

17Israel, apart from Benjamin, mustered four hundred thousand swordsmen, all of them
fit for battle.

18The Israelites went up to Bethel and inquired of GOD. They said, “Who of us is to go up first to fight against the Benjamites?”

They said, “Shall we go up again to fight against the Benjamites, our fellow Israelites?”

The LORD Answered, “Go up against them.” 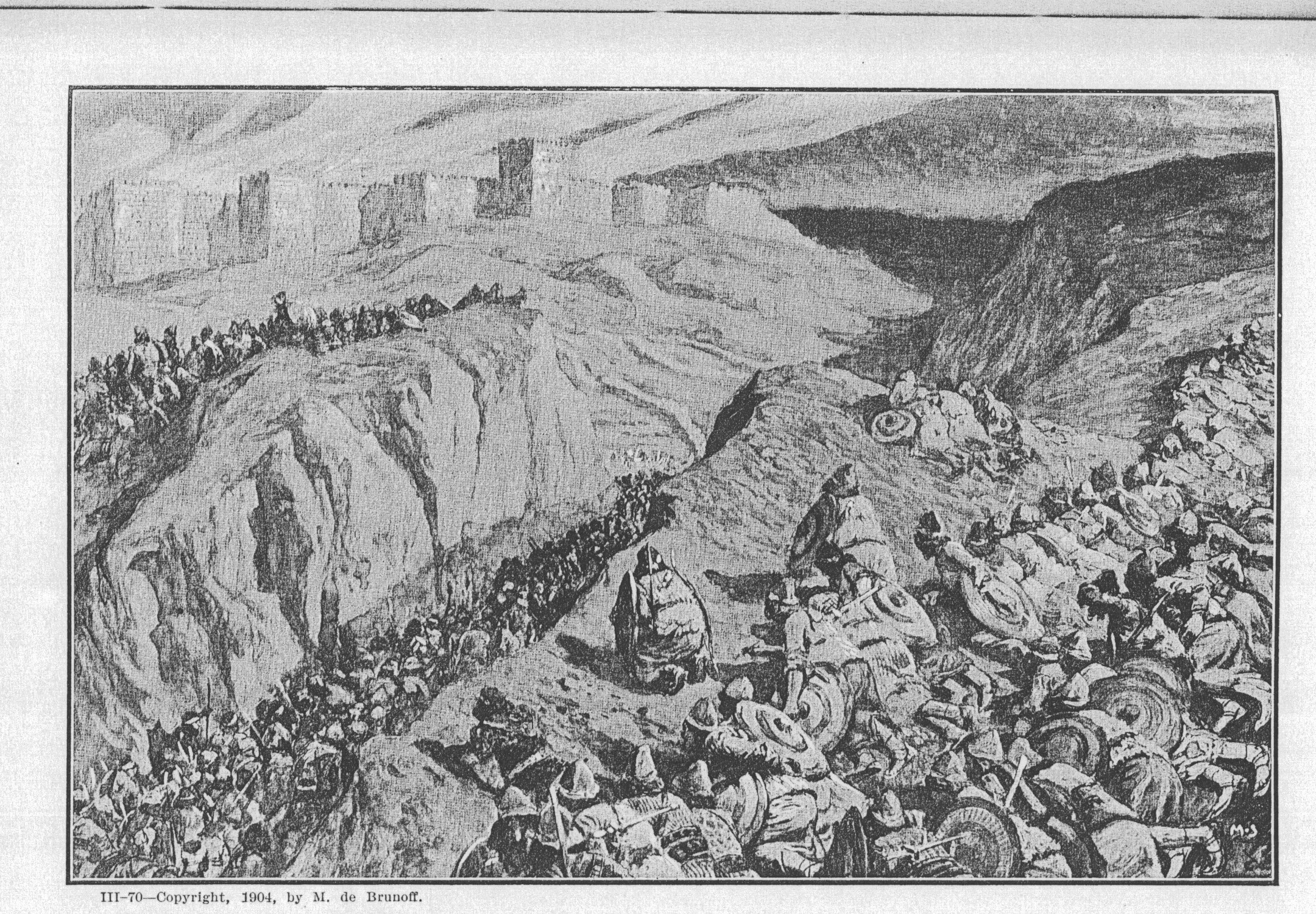 24Then the Israelites drew near to Benjamin the second day. 25This time, when the Benjamites came out from Gibeah to oppose them, they cut down another eighteen thousand Israelites, all of them armed with swords.

26Then all the Israelites, the whole army, went up to Bethel, and there they sat weeping Before The LORD. They fasted that day until evening and presented burnt offerings and fellowship offerings To The LORD. 27And the Israelites inquired of The LORD.

(In those days the Ark of the Covenant of GOD was there, 28 with Phinehas son of Eleazar, the son of Aaron, ministering before it.)


They asked, “Shall we go up again to fight against the Benjamites, our fellow Israelites, or not?”

The LORD Responded, “Go, for tomorrow I Will Give them Into your hands.”

29Then Israel set an ambush around Gibeah. 30They went up against the Benjamites on the third day and took up positions against Gibeah as they had done before. 31The Benjamites came out to meet them and were drawn away from the city. They began to inflict casualties on the Israelites as before, so that about thirty men fell in the open field and on the roads—the one leading to Bethel and the other to Gibeah. 32While the Benjamites were saying, “We are defeating them as before,” the Israelites were saying, “Let’s retreat and draw them away from the city to the roads.”

33All the men of Israel moved from their places and took up positions at Baal Tamar, and the Israelite ambush charged out of its place on the westc of Gibeah.d 34Then ten thousand of Israel’s able young men made a frontal attack on Gibeah. The fighting was so heavy that the Benjamites did not realize how near disaster was. 35The LORD Defeated Benjamin before Israel, and on that day the Israelites struck down 25,100 Benjamites, all armed with swords. 36Then the Benjamites saw that they were beaten.

Now the men of Israel had given way before Benjamin, because they relied on the ambush they had set near Gibeah. 37Those who had been in ambush made a sudden dash into Gibeah, spread out and put the whole city to the sword. 38The Israelites had arranged with the ambush that they should send up a great cloud of smoke from the city, 39and then the Israelites would counterattack.

The Benjamites had begun to inflict casualties on the Israelites (about thirty), and they said, “We are defeating them as in the first battle.” 40But when the column of smoke began to rise from the city, the Benjamites turned and saw the whole city going up in smoke.

46On that day twenty-five thousand Benjamite swordsmen fell, all of them valiant fighters. 47But six hundred of them turned and fled into the wilderness to the rock of Rimmon, where they stayed four months.48The men of Israel went back to Benjamin and put all the towns to the sword, including the animals and everything else they found. All the towns they came across they set on fire.

The children of Israel arose, and went up to the House of GOD - This consultation at Shiloh was right. But they ought to have done it at the commencement of their proceedings. Instead of this, all their plans were formed, and never doubting.  It would seem, that the war was just and inevitable, the only subject of their inquiry related to the precedency of the tribes - a point which it is likely was discussed in the assembly.

If they had asked Counsel of GOD sooner, their expedition would have been conducted on a different principle - most probably by reducing the number of fighting men, as in the case of Gideon's army. As it was, the vast number of volunteers formed an excessive force, unfit for strenuous and united action against a small, compact, and well-directed army.

A panic ensued, and the confederate tribes, in two successive engagements, sustained great losses. These repeated disasters (notwithstanding their attack on Benjamin had been Divinely authorized) overwhelmed them with shame and sorrow. Led to reflection, they became sensible of their guilt in not repressing their national idolatries, as well as in too proudly relying on their superior numbers and the rashness of this expedition. Having humbled themselves by prayer and fasting, as well as observed the appointed method of expiating their sins, they were assured of acceptance as well as of victory.

The presence and services of Phinehas on this occasion help us to ascertain the chronology thus far, that the date of the occurrence must be fixed shortly after the death of Joshua.