Sin alone can hurt us; JESUS Alone Can Do Good To sinners

1So in the ninth year of Zedekiah’s reign, on the tenth day of the tenth month, Nebuchadnezzar king of Babylon marched against Jerusalem with his whole army. He encamped outside the city and built siege works all around it. 2The city was kept under siege until the eleventh year of King Zedekiah.

3By the ninth day of the fourtha month the famine in the city had become so severe that there was no food for the people to eat. 4Then the city wall was broken through, and the whole army fled at night through the gate between the two walls near the king’s garden, though the Babyloniansb were surrounding the city. They fled toward the Arabah,c 5but the Babyloniand army pursued the king and overtook him in the plains of Jericho. All his soldiers were separated from him and scattered, 6and he was captured.

He was taken to the king of Babylon at Riblah, where sentence was pronounced on him. 7They killed the sons of Zedekiah before his eyes. Then they put out his eyes, bound him with bronze shackles and took him to Babylon. 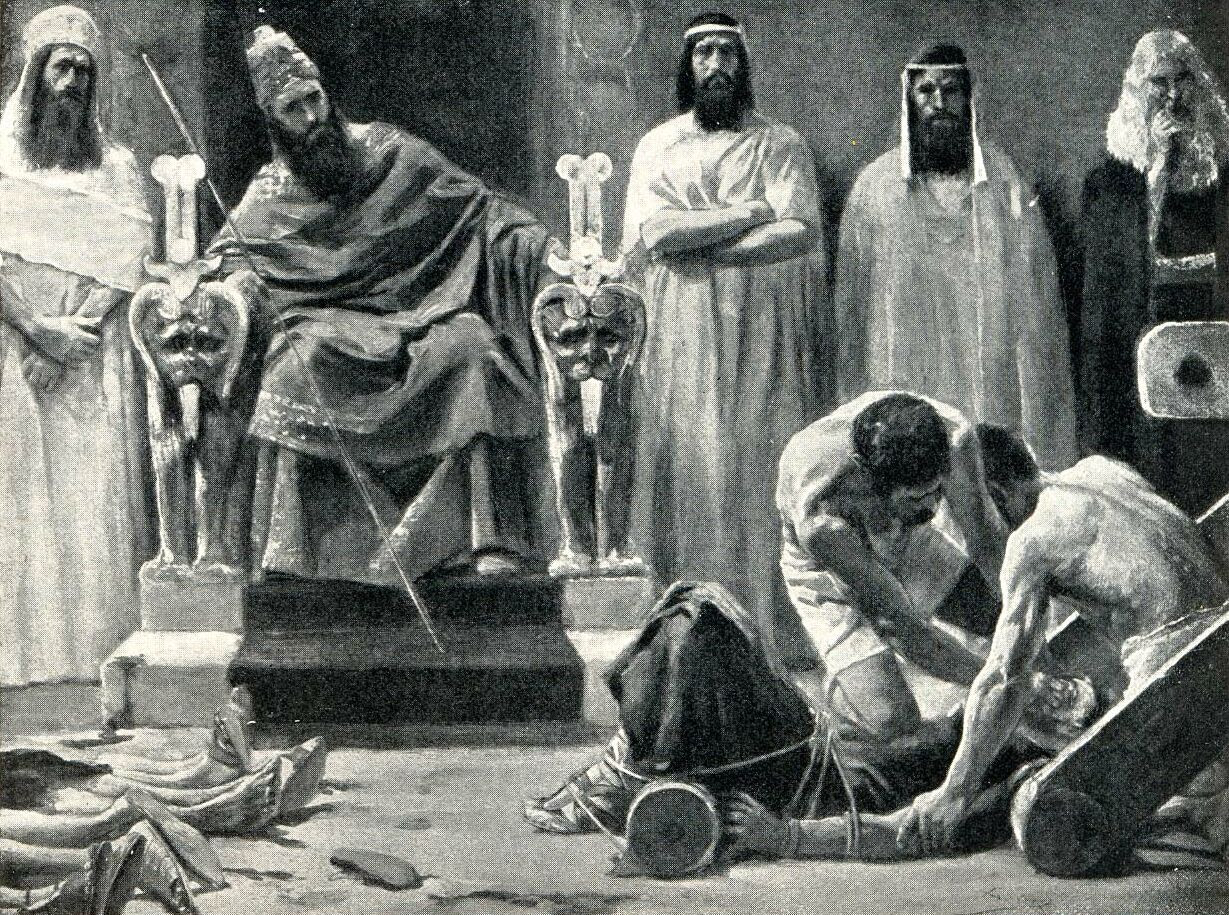 8On the seventh day of the fifth month, in the nineteenth year of Nebuchadnezzar king of Babylon, Nebuzaradan commander of the imperial guard, an official of the king of Babylon, came to Jerusalem.

9He set fire to The Temple of The LORD, the royal palace and all the houses of Jerusalem. Every important building he burned down. 10The whole Babylonian army under the commander of the imperial guard broke down the walls around Jerusalem.

11Nebuzaradan the commander of the guard carried into exile the people who remained in the city, along with the rest of the populace and those who had deserted to the king of Babylon.12But the commander left behind some of the poorest people of the land to work the vineyards and fields. 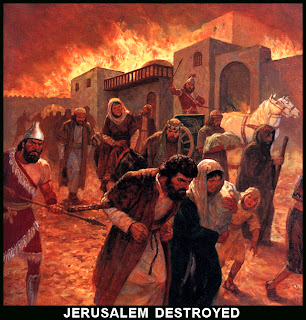 13The Babylonians broke up the bronze pillars, the movable stands and the bronze Sea that were at the Temple of The LORD and they carried the bronze to Babylon. 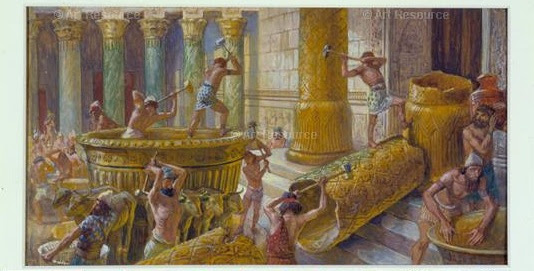 14They also took away the pots, shovels, wick trimmers, dishes and all the bronze articles used in the Temple service. 15The commander of the imperial guard took away the censers and sprinkling bowls—all that were made of pure gold or silver. 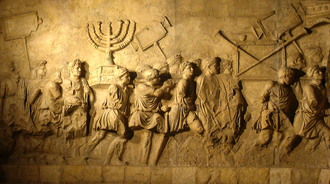 16The bronze from the two pillars, the Sea and the movable stands, which Solomon had made for the Temple of The Lord, was more than could be weighed. 17Each pillar was eighteen cubitse high. The bronze capital on top of one pillar was three cubitsf high and was decorated with a network and pomegranates of bronze all around. The other pillar, with its network, was similar.

18The commander of the guard took as prisoners Seraiah the chief priest, Zephaniah the priest next in rank and the three doorkeepers. 19Of those still in the city, he took the officer in charge of the fighting men, and five royal advisers. He also took the secretary who was chief officer in charge of conscripting the people of the land and sixty of the conscripts who were found in the city.

20Nebuzaradan the commander took them all and brought them to the king of Babylon at Riblah. 21There at Riblah, in the land of Hamath, the king had them executed.

So Judah went into captivity, away from her land.

22Nebuchadnezzar king of Babylon appointed Gedaliah son of Ahikam, the son of Shaphan, to be over the people he had left behind in Judah. 23When all the army officers and their men heard that the king of Babylon had appointed Gedaliah as governor, they came to Gedaliah at Mizpah—Ishmael son of Nethaniah, Johanan son of Kareah, Seraiah son of Tanhumeth the Netophathite, Jaazaniah the son of the Maakathite, and their men. 24Gedaliah took an oath to reassure them and their men. “Do not be afraid of the Babylonian officials,” he said. “Settle down in the land and serve the king of Babylon, and it will go well with you.” 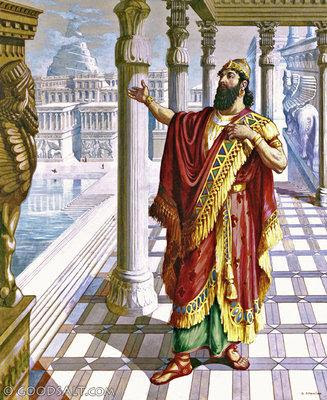 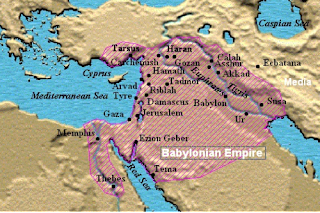 25In the seventh month, however, Ishmael son of Nethaniah, the son of Elishama, who was of royal blood, came with ten men and assassinated Gedaliah and also the men of Judah and the Babylonians who were with him at Mizpah. 26At this, all the people from the least to the greatest, together with the army officers, fled to Egypt for fear of the Babylonians.


28He spoke kindly to him and gave him a seat of honor higher than those of the other kings who were with him in Babylon. 29So Jehoiachin put aside his prison clothes and for the rest of his life ate regularly at the king’s table. 30Day by day the king gave Jehoiachin a regular allowance as long as he lived.

It was because of the LORD'S Anger that all this happened to Jerusalem and Judah, and in the end HE Thrust them From HIS Presence

Jerusalem was so fortified, that it could not be taken until famine rendered the besieged people unable to resist. In the prophecy and Lamentations of Jeremiah, we find more of this event; here it suffices to say, that the impiety and misery of the besieged were very great. At length the city was taken by storm. The king, his family, and his great men escaped in the night, by secret passages. But those deceive themselves who think to escape GOD'S Judgments, as much as those who think to brave them.

By what befell Zedekiah, two prophecies, which seemed to contradict each other, were both fulfilled. Jeremiah prophesied that Zedekiah should be brought to Babylon, Jeremiah 32:5; 34:3; Ezekiel, that he should not see Babylon, Ezekiel 12:13. He was brought there, but his eyes being put out, he did not see it.

The city and Temple were burnt, and, it is probable, the Ark of the Covenant in it. By this, GOD Showed how little HE Cares For the outward pomp of HIS Worship, when the life and power of religion are neglected. The walls of Jerusalem were thrown down, and the people carried captive to Babylon. The vessels of the Temple were carried away.

It was righteous with GOD To Deprive those of the benefit of HIS Worship, who had preferred false worships before it; those that would have many altars, now shall have none. As The LORD Spared Not the angels that sinned, as HE Doomed the whole race of fallen men to the grave, and all unbelievers to hell, and As HE Did Not Spared HIS OWN SON, but Delivered HIM Up for us all,  we need not wonder at any miseries HE May Bring Upon guilty nations, churches, or persons.

The king of Babylon appointed Gedaliah to be the governor and protector of the Jews left their land. But the things of their peace were so hidden from their eyes, that they did not know when they were well off. Ishmael slew him and all his friends, and, against the counsel of Jeremiah, the rest went to Egypt. Thus was a full end made of them by their own folly and disobedience; see Jeremiah chap. 40 to 45.

Jehoiachin was released out of prison, where he had been kept 37 years. Let none say that they shall never see good again according to the days wherein they have been afflicted. Even in this world the SAVIOR JESUS CHRIST Brings a release from bondage to the distressed sinner who seeks Him, bestowing foretastes of the pleasures which are at His Right Hand forevermore.

Sin alone can hurt us; JESUS Alone Can Do Good To sinners.