Save us and Help us with YOUR Right Hand

For the director of music. To the tune of “The Lily of the Covenant.” A miktamb of David. For teaching. When he fought Aram Naharaimc and Aram Zobah,d and when Joab returned and struck down twelve thousand Edomites in the Valley of Salt.

1YOU Have Rejected us, GOD, and Burst Upon us;
YOU Have Been Angry—now Restore us!
2YOU Have Shaken the land and Torn it open;
Mend its fractures, for it is quaking.
3YOU Have Shown YOUR people desperate times;
YOU Have Given us wine that makes us stagger.
4But for those who fear YOU, YOU Have Raised a banner
to be unfurled against the bow.
5Save us and Help us with YOUR Right Hand,
that those YOU Love may be delivered.

6GOD Has Spoken from HIS Sanctuary:

“In triumph I Will Parcel out Shechem
and Measure Off the Valley of Sukkoth.

7Gilead Is Mine, and Manasseh Is Mine;
Ephraim Is MY Helmet,
Judah Is MY Scepter.

8Moab Is MY Washbasin,
on Edom I Toss MY Sandal;
over Philistia I Shout in triumph.”

9Who will bring me to the fortified city?
Who will lead me to Edom?
10Is It Not YOU, GOD, YOU WHO Have now Rejected us
and no longer Go Out with our armies?
11Give us aid against the enemy,
for human help is worthless. 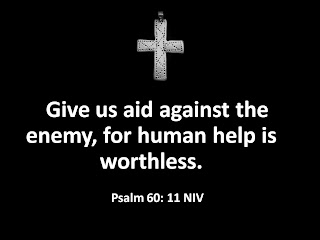 12With GOD we will gain the victory,
and HE Will Trample Down our enemies.

David owns GOD'S Displeasure to be the cause of all the hardships he had undergone. And when GOD Is Turning HIS Hand in our favor, it is good to remember our former troubles.  In GOD'S Displeasure their troubles began, therefore In HIS Favor their prosperity must begin.

Those breaches and divisions which the folly and corruption of man make, nothing but the Wisdom and Grace of GOD can repair, by pouring out a spirit of love and peace, by which only a kingdom is saved from ruin.

The Anger of GOD Against sin, is the only cause of all misery, private or public, that has been, is, or shall be. In all these cases there is no remedy, but by returning to The LORD with repentance, faith, and prayer; beseeching HIM To Return To us. CHRIST, The SON of David, is given for a banner to those that fear GOD; in HIM they are gathered together in one, and take courage. In HIS Name and Strength they wage war with the powers of darkness.