“This Is The Most Holy Place.”

12The building facing The Temple courtyard on the west side was seventy cubitsi wide. The wall of the building was five cubits thick all around, and its length was ninety cubits.j

15Then HE Measured the length of the building facing the courtyard at the rear of The Temple, including its galleries on each side; it was a hundred cubits.

The main hall, the inner Sanctuary and the portico facing the court, 16as well as the thresholds and the narrow windows and galleries around the three of them—everything beyond and including the threshold was covered with wood. The floor, the wall up to the windows, and the windows were covered. 17In the space above the outside of the entrance to the inner Sanctuary and on the walls at regular intervals all around the inner and outer Sanctuary 18were carved cherubim and palm trees. Palm trees alternated with cherubim. Each cherub had two faces: 19the face of a human being toward the palm tree on one side and the face of a lion toward the palm tree on the other. They were carved all around the whole Temple. 20From the floor to the area above the entrance, cherubim and palm trees were carved on the wall of the main hall.

21The main hall had a rectangular doorframe, and the one at the front of The Most Holy Place was similar. 22There was a wooden altar three cubitsl high and two cubits squarem ; its corners, its basen and its sides were of wood. The man said to me, “This is the table that is Before The LORD.” 23Both the main hall and The Most Holy Place had double doors. 24Each door had two leaves—two hinged leaves for each door. 25And on the doors of the main hall were carved cherubim and palm trees like those carved on the walls, and there was a wooden overhang on the front of the portico. 26On the sidewalls of the portico were narrow windows with palm trees carved on each side. The side rooms of The Temple also had overhangs. 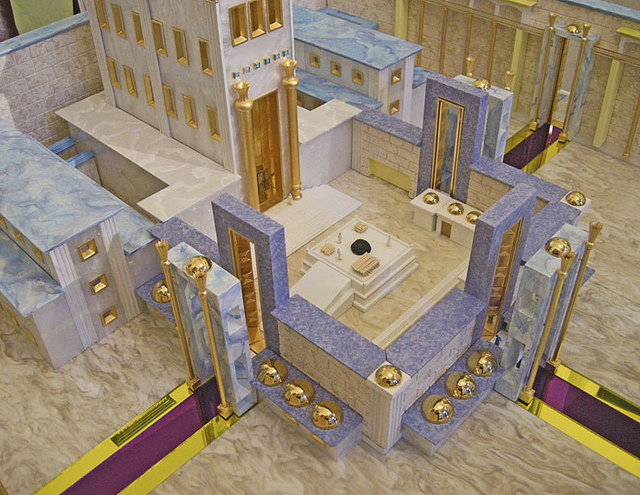 In this chapter The Divine Person, the prophet's guide, Brings him to The Temple itself in vision, and Gives the dimensions of the posts and doors, both of the holy and the most holy place, Ezekiel 41:1, then of the wall of the house, its side chambers, the winding about to them, and the doors of them, Ezekiel 41:5, next of a building before the separate place, its doorposts, narrow windows, and galleries, Ezekiel 41:12, after that each of the ornaments of the house are described, Ezekiel 41:18, then the altar of incense, Ezekiel 41:22.

And the chapter is concluded with observing the decorations and lights on the doors, porch, and side chambers of The Temple and Sanctuary, Ezekiel 41:23.