JEHOVAH'S Glory Departs From The Temple And Jerusalem


GOD'S Glory Departs From The Temple

1I looked, and I saw the likeness of a Throne of lapis lazuli above the vault that was over the heads of the cherubim.

2The LORD Said To the man clothed in linen,

“Go in among the wheels beneath the cherubim. Fill your hands with burning coals from among the cherubim and scatter them over the city.”

And as I watched, he went in. 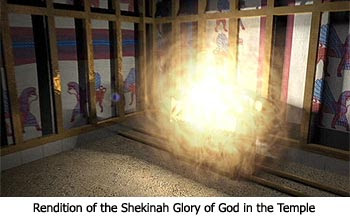 5The sound of the wings of the cherubim could be heard as far away as the outer court, like the Voice of GOD ALMIGHTY When HE Speaks.

6When The LORD Commanded the man in linen,

the man went in and stood beside a wheel. 7Then one of the cherubim reached out his hand to the fire that was among them. He took up some of it and put it into the hands of the man in linen, who took it and went out. 8(Under the wings of the cherubim could be seen what looked like human hands.)

9I looked, and I saw beside the cherubim four wheels, one beside each of the cherubim; the wheels sparkled like topaz. 10As for their appearance, the four of them looked alike; each was like a wheel intersecting a wheel. 11As they moved, they would go in any one of the four directions the cherubim faced; the wheels did not turn about as the cherubim went. The cherubim went in whatever direction the head faced, without turning as they went. 12Their entire bodies, including their backs, their hands and their wings, were completely full of eyes, as were their four wheels.

13I heard the wheels being called “the whirling wheels.”

20These were the living creatures I had seen beneath The GOD of Israel by the Kebar River, and I realized that they were cherubim.21Each had four faces and four wings, and under their wings was what looked like human hands. 22Their faces had the same appearance as those I had seen by the Kebar River. Each one went straight ahead.

In this chapter is a vision, very much like that in the first chapter, with some difference, and with a different view, the design of it being to represent the Wrath of GOD against Jerusalem, and HIS Departure from the city and Temple.

A Throne much like that in Ezekiel 1:26 is described, Ezekiel 10:1; orders are given from it to scatter coals over the city, Ezekiel 10:2; the situation of the cherubim when these orders were given, Ezekiel 10:3; the Removal of The Glory of The LORD from the cherub to the threshold of The House, and the consequences of it; the House filled with smoke; the court with the brightness of The LORD'S Glory; and the sound of the cherubim's wings heard to the outer court, as The Voice of GOD, Ezekiel 10:4.

And the chapter is concluded with observing, that the cherubim are the same with the living creatures seen in the vision of the first chapter, and had the same form, likeness, and motion, Ezekiel 10:20.