The Temple Of The Sun In Egypt Will Be Demolished

2Azariah son of Hoshaiah and Johanan son of Kareah and all the arrogant men said to Jeremiah,

“You are lying! The LORD our GOD Has Not Sent you to say, ‘You must not go to Egypt to settle there.’ 3But Baruch son of Neriah is inciting you against us to hand us over to the Babylonians,a so they may kill us or carry us into exile to Babylon.”

4So Johanan son of Kareah and all the army officers and all the people disobeyed The LORD'S Command to stay in the land of Judah.5Instead, Johanan son of Kareah and all the army officers led away all the remnant of Judah who had come back to live in the land of Judah from all the nations where they had been scattered. 6They also led away all those whom Nebuzaradan commander of the imperial guard had left with Gedaliah son of Ahikam, the son of Shaphan—the men, the women, the children and the king’s daughters. And they took Jeremiah the prophet and Baruch son of Neriah along with them. 7So they entered Egypt in disobedience to The LORD and went as far as Tahpanhes.

8In Tahpanhes The WORD of The LORD Came to Jeremiah:

9“While the Jews are watching, take some large stones with you and bury them in clay in the brick pavement at the entrance to Pharaoh’s palace in Tahpanhes.


‘This Is What The LORD ALMIGHTY, The GOD of Israel, Says:


I Will Send for MY servant Nebuchadnezzar king of Babylon, and I Will Set his throne over these stones I Have Buried here; he will spread his royal canopy above them. 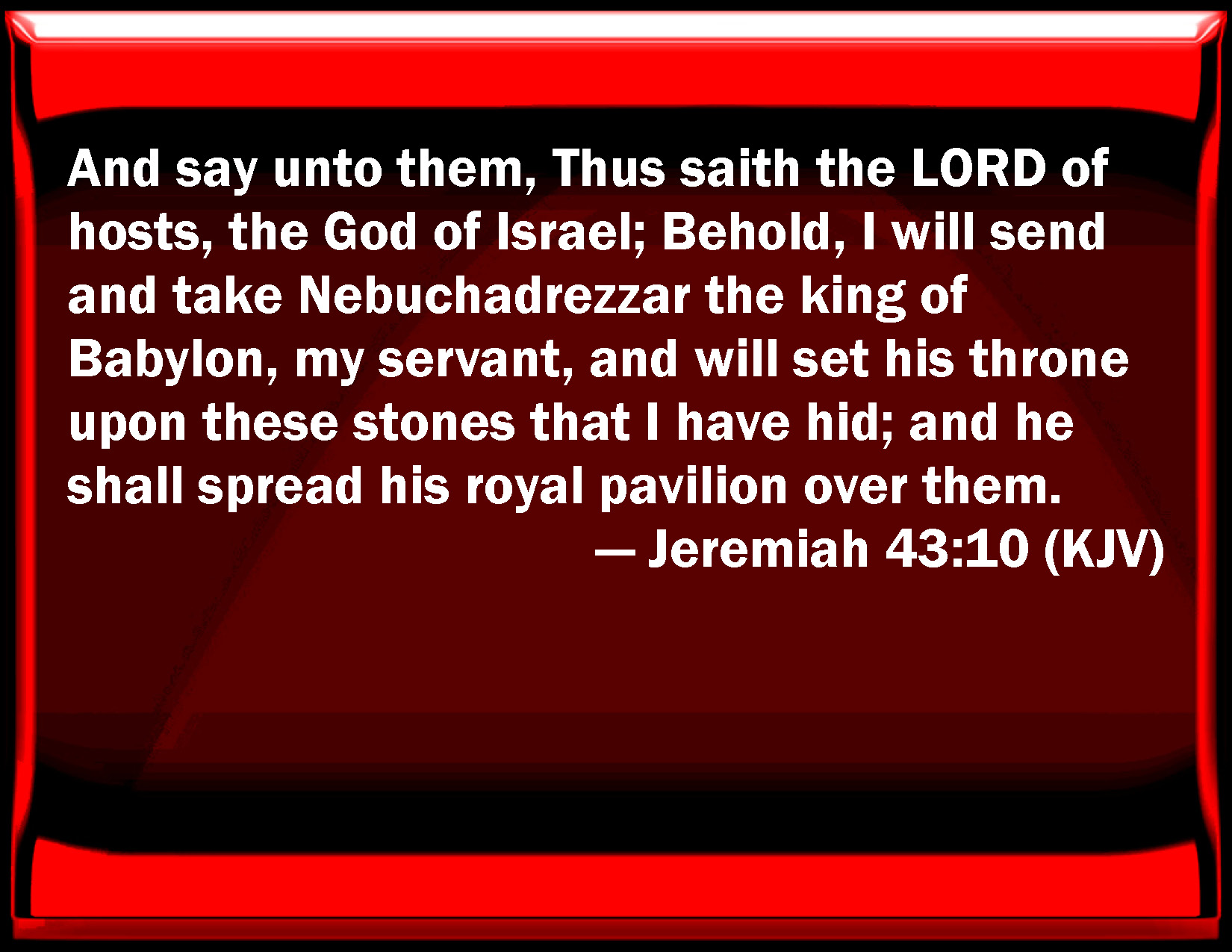 13 There in the temple of the sun in Egypt he will demolish the sacred pillars and will burn down the temples of the gods of Egypt.’ ” 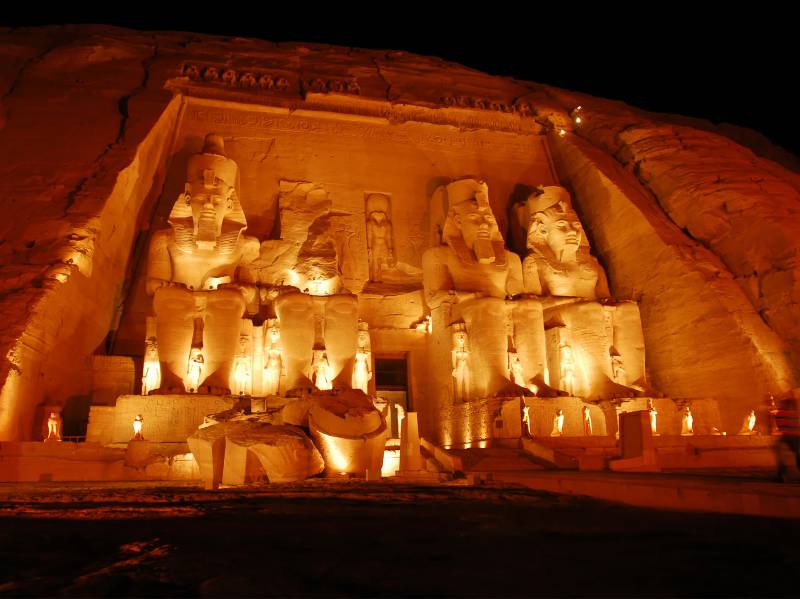 This chapter contains the answer of the princes and people to the prophet's message; a relation of their going into Egypt; and a prophecy of the destruction of that land. The persons that gave the answer are described, some by name, and all by their character; and the time of their giving it is mentioned, in which they charge the prophet with a falsehood; impute the whole to an instigation of Baruch, and an ill design of his, and so were disobedient to the Command of GOD, Jeremiah 43:1; and went into Egypt, and carried all with them, of every rank, age, and gender, and even Baruch, and the prophet too, and came to Tahpanhes, the seat of the kings of Egypt, Jeremiah 43:5.

Upon this a prophecy is delivered out, concerning the destruction of that country, which is signified by a symbol explained; the person, the instrument of it, is mentioned by name, Nebuchadnezzar king of Babylon; the devastation he should make is expressed by slaying with the sword, and carrying into captivity; by burning the temples of their gods, and breaking their images in pieces, Jeremiah 43:8.

HE shall break also the images of Bethshemesh, that is in the land of Egypt; and the houses of the gods of the Egyptians shall he burn with fire.

He shall break also the images of Bethshemesh, that is in the land of Egypt,.... Or, "of Heliopolis", as the Septuagint; the "city of the sun"; and so "Bethshemesh" here signifies the "house of the sun"; either it designs the temple of the sun, or the city where it was worshiped; as Heliopolis was famous for the worship of the sun, and for a magnificent temple in it, built for that purpose, and where abundance of persons resorted on that account, as Herodotus observes; here were many images of the sun; and these now should be broken to pieces, when this city should become the city of destruction, as is foretold it should by Isaiah, Isaiah 19:18; where the Targum expressly calls it the city Bethshemesh, that is to be destroyed; See Gill on Isaiah 19:18.

This is the same city that was formerly called On, and had a priest in Joseph's time, Genesis 41:45; and the houses of the gods of the Egyptians shall he burn with fire; which is repeated, that it might be taken notice of, and for the confirmation of it; though the words may be rendered, so as to remove the tautology, "and with the houses of the gods of the Egyptians shall he burn it with fire"; that is, Bethshemesh, or "the house of the sun", that shall not escape, being a principal temple. The gods they worshiped were Mnevis and Apis, which were oxen consecrated to the sun and moon. So says Porphyry, speaking of the Egyptians, "they consecrate oxen to the sun and moon: that which is sacred to the sun at Heliopolis is called Mnevis, and is the greatest of them: it is very black, because much sun makes human bodies black; and the hairs of its tail, and of its whole body, contrary to other oxen, turn upwards, as the sun makes its course contrary to the pole; its testicles are the largest, because by the heat of the sun venereal desires are excited; hence the sun is said to make nature fruitful.

To the moon they dedicate Taurus (or the bull), which they call Apis, and is blacker than others, bearing the signs of the sun and moon, because the light of the moon is from the sun; and the sign of the sun is the blackness of its body, and also the beetle that is under its tongue;'' and these were the images and gods of Bethshemesh or Heliopolis, that were to be destroyed by Nebuchadnezzar. Of his expedition into Egypt, whereby this prophecy was fulfilled, not only Josephus makes mention, but some Heathen writers gave plain hints of it.

The Jewish historian says, that Nebuchadnezzar, five years after the destruction of Jerusalem, led his army into Coelesyria, and took it; and made war with the Ammonites and Moabites; and, having subdued these nations, made a push into Egypt, in order to destroy that, and slew the king of it: and Berosus says, that "Nebuchadnezzar having settled his affairs in Egypt, and other countries; and having committed to his friends the captives of the Jews, Phoenicians, Syrians, and the nations about Egypt, went to Babylon:''