UFO Sightings Ever Recorded By Ezekiel : It Is JEHOVAH'S Visit To Earth

1 In my thirtieth year, in the fourth month on the fifth day, while I was among the exiles by the Kebar River, the heavens were opened and I saw Visions of GOD.

2On the fifth of the month—it was the fifth year of the exile of King Jehoiachin— 3The WORD of The LORD Came to Ezekiel the priest, the son of Buzi, by the Kebar River in the land of the Babylonians.a There The Hand of The LORD Was On him.

4I looked, and I saw a windstorm coming out of the north—an immense cloud with flashing lightning and surrounded by brilliant light.

The center of the fire looked like glowing metal,

5and in the fire was what looked like four living creatures. In appearance their form was human, 6but each of them had four faces and four wings.

7Their legs were straight; their feet were like those of a calf and gleamed like burnished bronze.

8Under their wings on their four sides they had human hands. All four of them had faces and wings, 9and the wings of one touched the wings of another. Each one went straight ahead; they did not turn as they moved.

11Such were their faces.

They each had two wings spreading out upward, each wing touching that of the creature on either side; and each had two other wings covering its body. 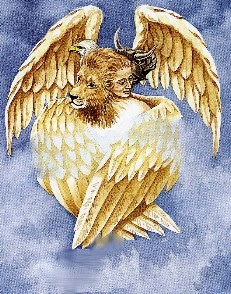 12Each one went straight ahead. Wherever The SPIRIT Would Go, they would go, without turning as they went. 13The appearance of the living creatures was like burning coals of fire or like torches. Fire moved back and forth among the creatures; it was bright, and lightning flashed out of it.14The creatures sped back and forth like flashes of lightning.

15As I looked at the living creatures, I saw a wheel on the ground beside each creature with its four faces. 16This was the appearance and structure of the wheels: They sparkled like topaz, and all four looked alike. Each appeared to be made like a wheel intersecting a wheel.

22Spread out above the heads of the living creatures was what looked something like a vault, sparkling like crystal, and awesome.23Under the vault their wings were stretched out one toward the other, and each had two wings covering its body. 24When the creatures moved, I heard the sound of their wings, like the roar of rushing waters, like The Voice of The ALMIGHTY,b like the tumult of an army. When they stood still, they lowered their wings.

25Then there came a Voice from above the vault over their heads as they stood with lowered wings. 26Above the vault over their heads was what looked like a Throne of lapis lazuli, and high above on the Throne was a Figure like that of a man. 27I saw that from what appeared to be His Waist Up HE Looked like glowing metal, as if full of fire, and that from there down HE Looked like fire; and brilliant light surrounded Him. 28Like the appearance of a rainbow in the clouds on a rainy day, so was the radiance around Him.

This Was the Appearance of the Likeness of The Glory of The LORD. When I saw it, I fell facedown,


and I heard The Voice of ONE Speaking. 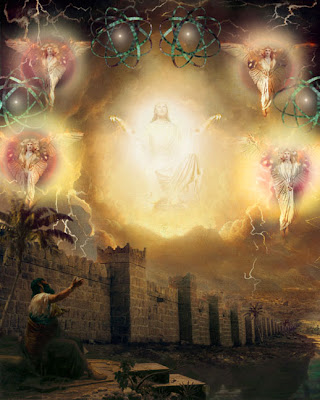 
Ezekiel , “GOD Strengthens” or “Hardens,” was the son of Buzi, a priest probably of the family of Zadok. He was one of those who went into exile with Jehoiachin 2 Kings 24:14, and would seem to have belonged to the higher class, a supposition agreeing with the consideration accorded to him by his fellow exiles (Ezekiel 8:1, etc.).

The chief scene of his ministry was Tel-Abib in northern Mesopotamia, on the river Chebar, along the banks of which were the settlements of the exiles. He was probably born in or near Jerusalem, where he must certainly have lived many years before he was carried into exile. The date of his entering upon the prophetic office is given in Ezekiel 1:1; and if he entered upon this office at the legal age of 30, he must have been about 14 years of age when Josiah died. In this case, he could not have exercised the priestly functions at Jerusalem. However, since his father was a priest Ezekiel 1:3, no doubt he was brought up in the courts of The Temple, and so became familiar with its services and arrangements. He was married, and lost his wife in the ninth year of his exile. Of the rest of his life we know nothing.

The period during which Ezekiel prophesied in Babylonia was signalized by the miserable reign of Zedekiah, ending in his imprisonment and death - by the destruction of The Temple, the sack of Jerusalem, and the final deportation of its inhabitants - by Gedaliah's short regency over the poor remnant left behind in the country, his treacherous murder, and the flight of the conspirators, conveying Jeremiah with them into Egypt - and by Nebuchadnezzar’s conquests in the neighboring countries, and especially his prolonged siege of Tyre.

This chapter contains a vision, which is the introduction to the prophet's call and commission to perform his office; in the account of which may be observed the time when it was seen, Ezekiel 1:1; and the place both where the prophet was when he saw it, and the object or things that were beheld by him; and the original, form, and manner of the vision, Ezekiel 1:3.

And then a firmament is seen, described by its situation, over the heads of the living creatures; and by its color, as the terrible crystal, Ezekiel 1:22; by what were under it, the wings of the living creatures of which a more particular account is given, Ezekiel 1:23; by what was heard from it, a voice, Ezekiel 1:25; and by what was above it, a THRONE; described by its color, as a sapphire stone; and by a PERSON on it, WHO Had the Appearance of a man, Ezekiel 1:26; WHO, in general, Looked like the color of amber; within which was the appearance of fire from HIS Loins Upwards, and from HIS Loins Downwards; the fire had a brightness round about it; and that brightness was like a rainbow in a cloud, on a rainy day; and this appearance was no other than that of a Divine and Glorious PERSON; which, when seen by the prophet, caused him, through reverence, to fall upon his face; when he heard a Voice Speaking to him what is recorded in the following chapter, Ezekiel 1:27.