JEHOVAH Seeks The Worshiper In HIS SON JESUS And The HIS SPIRIT!


The Death of Nadab and Abihu


1Aaron’s sons Nadab and Abihu took their censers, put fire in them and added incense; and they offered unauthorized fire Before The LORD, contrary to HIS Command. 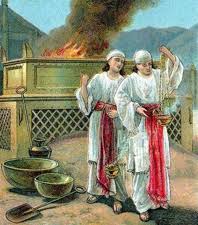 2 So fire came out from the Presence of The LORD and consumed them, and they died Before The LORD. 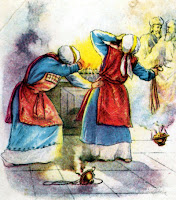 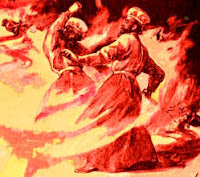 3Moses then said to Aaron,


“This Is What The LORD Spoke of When HE Said:

“ ‘Among those who approach ME
I WILL Be Proved Holy;
in the sight of all the people
I Will Be Honored.’ ”

4Moses summoned Mishael and Elzaphan, sons of Aaron’s uncle Uzziel, and said to them, “Come here; carry your cousins outside the camp, away from the front of the Sanctuary.” 5So they came and carried them, still in their tunics, outside the camp, as Moses ordered.

6Then Moses said to Aaron and his sons Eleazar and Ithamar, “Do not let your hair become unkempta and do not tear your clothes, or you will die and The LORD WILL Be Angry With the whole community. But your relatives, all the Israelites, may mourn for those The LORD Has Destroyed by fire. 7Do not leave the entrance to the tent of meeting or you will die, because The LORD’S anointing oil is on you.” So they did as Moses said.

8 Then The LORD Said to Aaron,

9 “You and your sons are not to drink wine or other fermented drink whenever you go into the tent of meeting, or you will die. This is a lasting ordinance for the generations to come, 10so that you can distinguish between the holy and the common, between the unclean and the clean,11and so you can teach the Israelites all the Decrees The LORD Has Given them through Moses.”

12Moses said to Aaron and his remaining sons, Eleazar and Ithamar, “Take the grain offering left over from the food offerings prepared without yeast and presented to The LORD and eat it beside the altar, for it is most Holy. 13Eat it in the sanctuary area, because it is your share and your sons’ share of the food offerings presented To The LORD; for so I have been commanded. 14But you and your sons and your daughters may eat the breast that was waved and the thigh that was presented. Eat them in a ceremonially clean place; they have been given to you and your children as your share of the Israelites’ fellowship offerings. 15The thigh that was presented and the breast that was waved must be brought with the fat portions of the food offerings, to be waved Before The LORD as a wave offering. This will be the perpetual share for you and your children, As The LORD Has Commanded.”

16When Moses inquired about the goat of the sin offeringb and found that it had been burned up, he was angry with Eleazar and Ithamar, Aaron’s remaining sons, and asked, 17“Why didn’t you eat the sin offering in the sanctuary area? It is most Holy; it was given to you to take away the guilt of the community by making atonement for them Before The LORD. 18Since its blood was not taken into the Holy Place, you should have eaten the goat in the sanctuary area, as I commanded.”

19Aaron replied to Moses, “Today they sacrificed their sin offering and their burnt offering Before The LORD, but such things as this have happened to me. Would The LORD Have Been Pleased if I had eaten the sin offering today?” 20When Moses heard this, he was satisfied.

Nadab and Abihu Burnt To Death

If this incident occurred at the solemn period of the consecrating and dedicating the altar, these young men assumed an office which had been committed to Moses; or if it were some time after, it was an encroachment on duties which devolved on their father alone as the high priest. But the offense was of a far more aggravated nature than such a mere informality would imply. It consisted not only in their venturing unauthorized to perform the incense service—the highest and most solemn of the priestly offices—not only in their engaging together in a work which was the duty only of one, but in their presuming to intrude into the holy of holies, to which access was denied to all but the high priest alone.

In this respect, “they offered strange fire Before The LORD”; they were guilty of a presumptuous and unwarranted intrusion into a sacred office which did not belong to them.  But their offense was more aggravated still; for instead of taking the fire which was put into their censers from the brazen altar, they seem to have been content with common fire and thus perpetrated an act which, considering the descent of the miraculous fire they had so recently witnessed and the solemn obligation under which they were laid to make use of that which was specially appropriated to the service of the altars, they betrayed a carelessness, an irreverence, a want of faith, most surprising and lamentable.

A precedent of such evil tendency was dangerous, and it was imperatively necessary, therefore, as well for the priests themselves as for the sacred things, that a marked expression of the Divine Displeasure should be given for doing that which

“GOD Did Not Command them.”