You are to be holy To ME Because I, JEHOVAH, AM HOLY

1 The LORD Said To Moses,


2 “Say to the Israelites: ‘Any Israelite or any foreigner residing in Israel who sacrifices any of his children to Molek is to be put to death. The members of the community are to stone him.3I MYSELF WILL Set MY Face Against him and WILL Cut him Off from his people; for by sacrificing his children to Molek, he has defiled MY Sanctuary and profaned MY Holy Name. 4If the members of the community close their eyes when that man sacrifices one of his children to Molek and if they fail to put him to death, 5I MYSELF WILL Set MY Face Against him and his family and WILL Cut them Off from their people together with all who follow him in prostituting themselves to Molek. 6“ ‘I WILL Set MY Face Against anyone who turns to mediums and spiritists to prostitute themselves by following them, and I WILL Cut them Off from their people.

7“ ‘Consecrate yourselves and be holy, because I AM The LORD your GOD. 8Keep MY Decrees and follow them.

I AM The LORD, WHO Makes you holy.

10“ ‘If a man commits adultery with another man’s wife—with the wife of his neighbor—both the adulterer and the adulteress are to be put to death.

11“ ‘If a man has sexual relations with his father’s wife, he has dishonored his father. Both the man and the woman are to be put to death; their blood will be on their own heads.

12“ ‘If a man has sexual relations with his daughter-in-law, both of them are to be put to death. What they have done is a perversion; their blood will be on their own heads.

13“ ‘If a man has sexual relations with a man as one does with a woman, both of them have done what is detestable. They are to be put to death; their blood will be on their own heads.

14“ ‘If a man marries both a woman and her mother, it is wicked. Both he and they must be burned in the fire, so that no wickedness will be among you.

15“ ‘If a man has sexual relations with an animal, he is to be put to death, and you must kill the animal.

16“ ‘If a woman approaches an animal to have sexual relations with it, kill both the woman and the animal. They are to be put to death; their blood will be on their own heads.

17“ ‘If a man marries his sister, the daughter of either his father or his mother, and they have sexual relations, it is a disgrace. They are to be publicly removed from their people. He has dishonored his sister and will be held responsible.

18“ ‘If a man has sexual relations with a woman during her monthly period, he has exposed the source of her flow, and she has also uncovered it. Both of them are to be cut off from their people.

19“ ‘Do not have sexual relations with the sister of either your mother or your father, for that would dishonor a close relative; both of you would be held responsible.

20“ ‘If a man has sexual relations with his aunt, he has dishonored his uncle. They will be held responsible; they will die childless.

21“ ‘If a man marries his brother’s wife, it is an act of impurity; he has dishonored his brother. They will be childless.

22“ ‘Keep all MY Decrees and Laws and follow them, so that the land where I AM Bringing you to live may not vomit you out. 23You must not live according to the customs of the nations I AM Going To Drive Out before you.

Because they did all these things, I abhorred them.


24But I Said to you, “You will possess their land; I WILL Give it to you as an inheritance, a land flowing with milk and honey.”

I AM The LORD your GOD, WHO Has Set

you Apart from the nations. 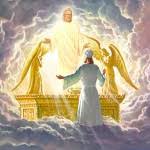 25“ ‘You must therefore make a distinction between clean and unclean animals and between unclean and clean birds. Do not defile yourselves by any animal or bird or anything that moves along the ground—

those that I Have Set Apart as unclean for you.

The LORD, AM Holy, and I Have Set you

Apart from the nations to be MY Own.

27“ ‘A man or woman who is a medium or spiritist among you must be put to death. You are to stone them; their blood will be on their own heads.’ ”

As a god worshiped by the Phoenicians and Canaanites, Moloch had associations with a particular kind of propitiatory child sacrifice by parents. Moloch figures in the Book of Deuteronomy and in the Book of Leviticus as a form of idolatry (Leviticus 18:21: "And you shall not let any of your seed pass through the fire to Moloch").

In the Old Testament, Gehenna was a valley by Jerusalem, where apostate Israelites and followers of various Baalim and Caananite gods, including Moloch, sacrificed their children by fire (2 Chronicles 28:3, 33:6; Jeremiah 7:31, 19:2–6).

Moloch has been used figuratively in English literature from John Milton's Paradise Lost (1667) to Allen Ginsberg's "Howl" (1955), to refer to a person or thing demanding or requiring a very costly sacrifice

Child sacrifice is the ritualistic killing of children in order to please, propitiate or force a god or supernatural beings in order to achieve a desired result. As such, it is a form of human sacrifice.

Archeologists have found remains of 42 children. It is alleged that these remains were sacrificed to Tlaloc (and a few to Ehécatl) in the offerings of the Great Pyramid of Tenochtitlan by the Aztecs of pre-Columbian Mexico. Although, it must be stated that sacrificial rituals were not literally described in Aztec codex and are just as likely to be a Spanish/European misinterpretation of ruins and burial

The Inca culture sacrificed children in a ritual called capacocha. Their frozen corpses are still being discovered in the South American mountaintops. The first of these corpses, a female child who had died from a blow to the skull, was discovered in 1995.  Other methods of sacrifice included strangulation and simply leaving the children, who had been given an intoxicating drink, to lose consciousness in the extreme cold and low-oxygen conditions of the mountaintop, and to die of exposure.

The Moche of northern Peru practiced mass sacrifices of men and boys.

Why Then Did JEHOVAH Command Abraham to Sacrifice Isaac on Moriah?

Genesis 22 relates the binding of Isaac, in which GOD Tests Abraham by asking him to present his son, Isaac, as a sacrifice on Mount Moriah. No reason is given within the text. Abraham agrees to this Command without arguing. The story ends with an angel stopping Abraham at the last minute and making Isaac's sacrifice unnecessary by providing a ram, caught in some nearby bushes, to be sacrificed instead.  But the climax of the story, commanding Abraham not to sacrifice Isaac, is the whole point: to put an end to the ritual of child sacrifice, which contradicts the morality of a Perfect and Giving (not taking) Monotheistic GOD.

Are we shocked at the unnatural cruelty of the ancient idolaters in sacrificing their children? We may justly be so.

But are there not very many parents, who, by bad teaching and wicked examples, and by the mysteries of iniquity which they show their children, devote them to the service of satan, and forward their everlasting ruin, in a manner even more to be lamented? What an account must such parents render to GOD, and what a meeting will they have with their children at the Day of GOD’s Judgment!


Do Not Curse Your Father and Mother

On the other hand, let children remember that he who cursed father or mother was surely put to death. This Law CHRIST Confirmed. Laws which were made before are repeated, and penalties annexed to them. The Law of GOD Has Made these practices sin, and it is right that we go on that principle, and should avoid them when the law has made them deserving death, from a principle of self-preservation.

Children, obey your parents In The LORD, for this is right. “Honor your father and mother”—which is the first commandment with a promise— “so that it may go well with you and that you may enjoy long life on the earth.

In the midst of these laws comes in a general charge, “Sanctify yourselves, and be holy.” It Is The LORD WHO Sanctifies us By The HOLY SPIRIT through The WORDS of GOD, and HIS Work Will Be Done, though it is difficult. We should work out our salvation, for It Is GOD WHO Works in us.