David Again Spares The Life Of Saul The LORD'S anointed 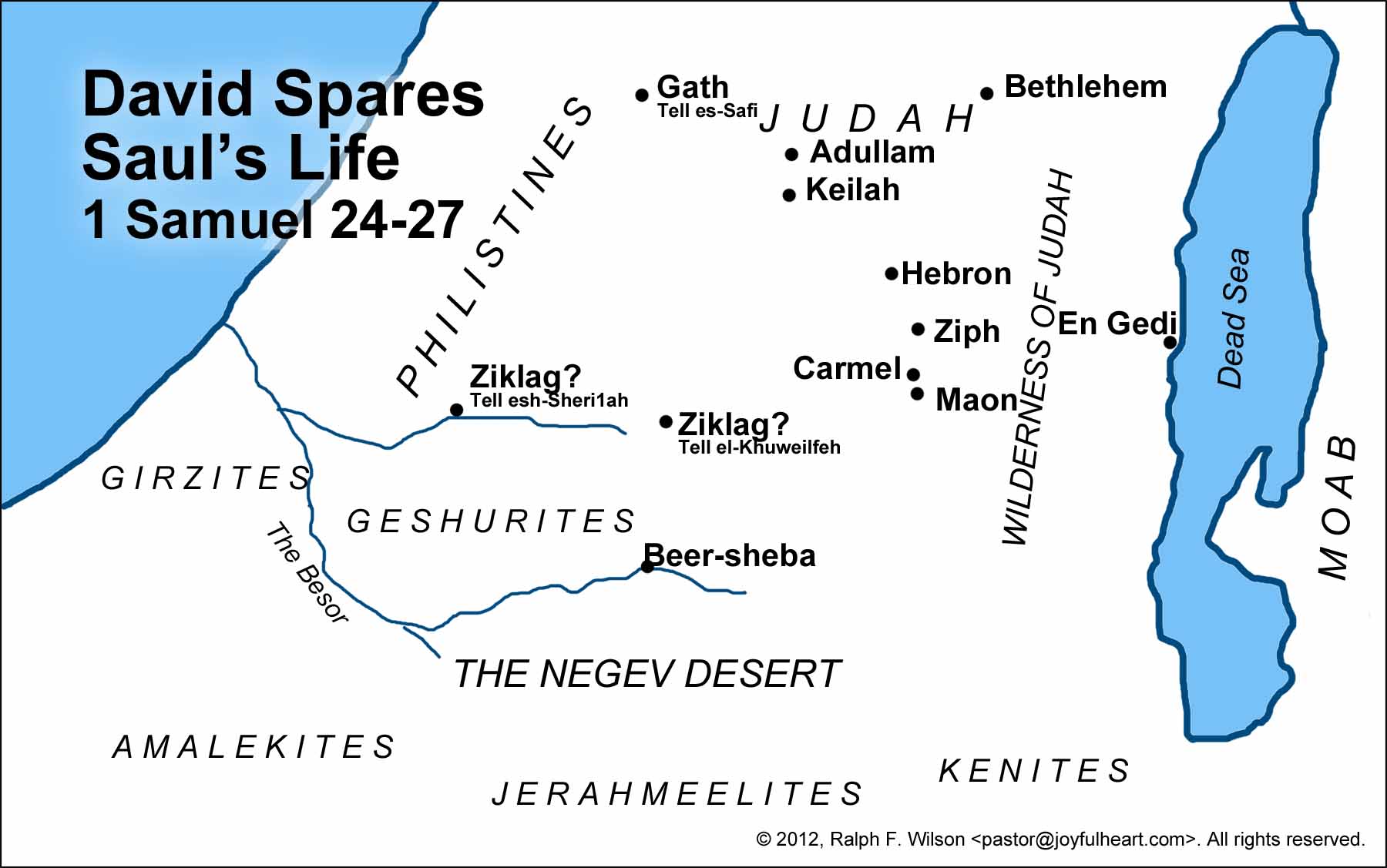 1The Ziphites went to Saul at Gibeah and said, “Is not David hiding on the hill of Hakilah, which faces Jeshimon?”

2So Saul went down to the Desert of Ziph, with his three thousand select Israelite troops, to search there for David. 3Saul made his camp beside the road on the hill of Hakilah facing Jeshimon, but David stayed in the wilderness. When he saw that Saul had followed him there, 4he sent out scouts and learned that Saul had definitely arrived.

5Then David set out and went to the place where Saul had camped. He saw where Saul and Abner son of Ner, the commander of the army, had lain down. Saul was lying inside the camp, with the army encamped around him.

6David then asked Ahimelek the Hittite and Abishai son of Zeruiah, Joab’s brother, “Who will go down into the camp with me to Saul?”

7So David and Abishai went to the army by night, and there was Saul, lying asleep inside the camp with his spear stuck in the ground near his head. Abner and the soldiers were lying around him.

8Abishai said to David, “Today GOD Has Delivered your enemy into your hands. Now let me pin him to the ground with one thrust of the spear; I won’t strike him twice.”

9But David said to Abishai,

“Don’t destroy him! Who can lay a hand on The LORD'S anointed and be guiltless? 10As Surely As The LORD Lives,” he said, “The LORD HIMSELF Will Strike him, or his time will come and he will die, or he will go into battle and perish. 11But The LORD Forbid that I should lay a hand on The LORD'S anointed. Now get the spear and water jug that are near his head, and let’s go.”

12So David took the spear and water jug near Saul’s head, and they left. No one saw or knew about it, nor did anyone wake up. They were all sleeping, Because The LORD Had Put them into a deep sleep. 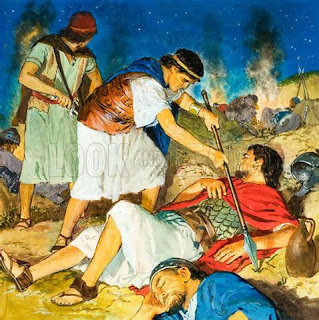 13Then David crossed over to the other side and stood on top of the hill some distance away; there was a wide space between them. 14He called out to the army and to Abner son of Ner, “Aren’t you going to answer me, Abner?”

Abner replied, “Who are you who calls to the king?”

15David said, “You’re a man, aren’t you? And who is like you in Israel? Why didn’t you guard your lord the king? Someone came to destroy your lord the king. 16What you have done is not good. As Surely As The LORD Lives, you and your men must die, because you did not guard your master, The LORD'S anointed. Look around you. Where are the king’s spear and water jug that were near his head?”

17Saul recognized David’s voice and said, “Is that your voice, David my son?”

David replied, “Yes it is, my lord the king.” 18And he added, “Why is my lord pursuing his servant? What have I done, and what wrong am I guilty of? 19Now let my lord the king listen to his servant’s words. If The LORD Has Incited you Against me, then May HE Accept an offering. If, however, people have done it, may they be cursed Before The LORD! They have driven me today from my share in The LORD'S Inheritance and have said, ‘Go, serve other gods.’ 20Now do not let my blood fall to the ground far from the Presence of The LORD. The king of Israel has come out to look for a flea—as one hunts a partridge in the mountains.”

“I have sinned. Come back, David my son. Because you

considered my life precious today, I will not try to harm you

again. Surely I have acted like a fool and have been

22“Here is the king’s spear,” David answered. “Let one of your young men come over and get it. 23The LORD Rewards everyone for their righteousness and faithfulness. The LORD Delivered you into my hands today, but I would not lay a hand on The LORD'S anointed. 24 As surely as I valued your life today, so may The LORD Value my life and Deliver me From all trouble.”

25 Then Saul said to David,

“May you be blessed, David my son; you will do great things and surely triumph.”

So David went on his way, and Saul returned home.

There is a vast deal of dignity in this speech of David, arising from a consciousness of his own innocence. He neither begs his life from Saul, nor offers one argument to prevail upon him to desist from his felonious attempts, but refers the whole matter To GOD, as the Judge and Vindicator of oppressed innocence.


Saul himself is speechless, except in the simple acknowledgment of his sin (חטאתי chatathi, "I have sinned), and in the behalf of their king not one of his officers has one word to say! It is strange that none of them offered now to injure the person of David, but they saw that he was most evidently under the guardian care of GOD, and that their master was apparently abandoned by HIM.

Saul invites David to return, but David knew the uncertainty of Saul's character too well to trust himself in the power of this infatuated king. How foolish are the counsels of men Against GOD! When HE Undertakes To Save, who can destroy? And who can deliver out of HIS Hands?