Give Your Enemy Food To Eat, Water To Drink, But Not Enemies Of CHRIST

1Do not envy the wicked,
do not desire their company;
2for their hearts plot violence,
and their lips talk about making trouble.

3By wisdom a house is built,
and through understanding it is established;
4through knowledge its rooms are filled
with rare and beautiful treasures.

5The wise prevail through great power,
and those who have knowledge muster their strength.
6Surely you need guidance to wage war,
and victory is won through many advisers.

7Wisdom is too high for fools;
in the assembly at the gate they must not open their mouths.

8Whoever plots evil
will be known as a schemer.
9The schemes of folly are sin,
and people detest a mocker.

10If you falter in a time of trouble,
how small is your strength!
11Rescue those being led away to death;
hold back those staggering toward slaughter.

12If you say, “But we knew nothing about this,”
Does Not HE Who Weighs the heart Perceive it?
Does Not HE Who Guards your life Know it?
Will HE Not Repay everyone according to what they have done?

13Eat honey, my son, for it is good;
honey from the comb is sweet to your taste.
14Know also that wisdom is like honey for you:
If you find it, there is a future hope for you,
and your hope will not be cut off. 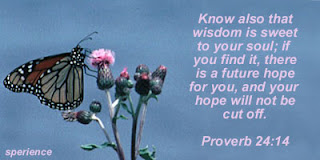 15Do not lurk like a thief near the house of the righteous,
do not plunder their dwelling place;
16for though the righteous fall seven times, they rise again,
but the wicked stumble when calamity strikes.

17Do not gloat when your enemy falls;
when they stumble, do not let your heart rejoice,
18or The Lord Will See and Disapprove
and Turn His Wrath away from them.

19Do not fret because of evildoers
or be envious of the wicked,
20for the evildoer has no future hope,
and the lamp of the wicked will be snuffed out.

21Fear The LORD and The KING, my son,
and do not join with rebellious officials,
22for those two will send sudden destruction on them,
and who knows what calamities they can bring?

Further Sayings of the Wise

23These also are sayings of the wise:

To show partiality in judging is not good:
24Whoever says to the guilty, “You are innocent,”
will be cursed by peoples and denounced by nations.
25But it will go well with those who convict the guilty,
and rich blessing will come on them.
26An honest answer
is like a kiss on the lips.

27Put your outdoor work in order
and get your fields ready;
after that, build your house.
28Do not testify against your neighbor without cause—
would you use your lips to mislead?
29Do not say, “I’ll do to them as they have done to me;
I’ll pay them back for what they did.”
30I went past the field of a sluggard,
past the vineyard of someone who has no sense;
31thorns had come up everywhere,
the ground was covered with weeds,
and the stone wall was in ruins.
32I applied my heart to what I observed
and learned a lesson from what I saw:

33A little sleep, a little slumber,
a little folding of the hands to rest—
34and poverty will come on you like a thief
and scarcity like an armed man.


Do not gloat when your enemy falls;
when they stumble, do not let your heart rejoice,
or The LORD Will See and Disapprove
and Turn HIS Wrath away from them.

These words are spoken not to the wicked man, Proverbs 24:15; but to the just man, or Solomon's son, or the children of Wisdom; for by the “enemy” is meant such who are at enmity with the people of GOD, as the seed of the serpent, and those after the flesh, are: and when these “fall”, saints should not “rejoice”; as when they fall into sin; or rather when they fill into calamity and distress; for this is also the part which wicked men act towards the people of GOD, and should not be imitated in.

As private revenge is not to be sought, nor acted, so joy at the calamity and ruin of a private enemy, or a man's own enemy, should not be expressed; but rather he is to be pitied and helped; for to love an enemy, and show regard to him, is the doctrine both of the Old and of the New Testament.

If your enemy is hungry, give him food to eat; if he is thirsty, give him water to drink.

Even secret joy should not be indulged, gladness in the heart, though it does not appear in the countenance, and is not expressed in words; no, not at the least appearance of mischief, when he only stumbles and is ready to fall; and much less should there be exultation and rejoicings made in an open manner at the utter ruin of him.

It’s Because GOD Sees all things, not only external actions, but the heart, and the inward motions of it; and though men may hide the pleasure they feel at the misery of an enemy from others, they cannot hide it from The LORD; nor is this said by way of doubt, but as a certain thing; and which The LORD Not Barely Sees, but Takes Notice of, and to such a degree as to Resent it, and Show HIS Displeasure At it by Taking the following step and HE Turn Away HIS Wrath from him; Remove the effects of it, Raise him out of his fallen and distressed condition, and Restore him to his former prosperous one; and not only so, but Turn it Upon you, so that there is a strange and sudden change of circumstances; you who was pleasing yourself with the distress of your enemy are fallen into the same, and he is delivered out of it, which must be a double affliction to such a man; so that by rejoicing at an enemy, he is doing his enemy good and himself hurt.

GOD and HIS people, as was by the Israelites at the destruction of Pharaoh and his host, Exodus 15:1; and as will be by the church at the destruction of antichrist, and which they are called upon to do, partly on account of their own deliverance and safety, and chiefly because of The Glory of GOD, and of HIS Justice Displayed therein.

Rejoice over her, you heavens! Rejoice, you people of GOD! Rejoice, apostles and prophets! For GOD Has Judged her with the judgment she imposed on you.