The Reward Of The Fear of JEHOVAH Is Eternal Life In JESUS, HIS SON

1A good name is more desirable than great riches;
to be esteemed is better than silver or gold.


2Rich and poor have this in common:
The LORD Is The MAKER of them all. 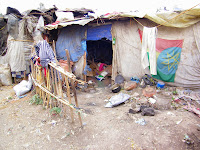 3The prudent see danger and take refuge,
but the simple keep going and pay the penalty.

4 Humility Is the Fear of The LORD;
its wages are riches and honor and life.

5In the paths of the wicked are snares and pitfalls,
but those who would preserve their life stay far from them.

6 Start children off on the way they should go,
and even when they are old they will not turn from it.

7The rich rule over the poor,
and the borrower is slave to the lender.

8Whoever sows injustice reaps calamity,
and the rod they wield in fury will be broken.
9The generous will themselves be blessed,
for they share their food with the poor. 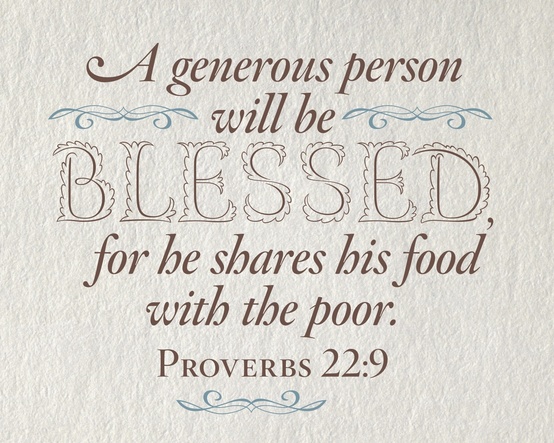 10Drive out the mocker, and out goes strife;
quarrels and insults are ended.
11One who loves a pure heart and who speaks with grace
will have the king for a friend.
12The Eyes of The LORD keep watch over knowledge,
but HE Frustrates the words of the unfaithful.
13The sluggard says, “There’s a lion outside!
I’ll be killed in the public square!”

14The mouth of an adulterous woman is a deep pit;
a man who is under The LORD'S Wrath falls into it.

15 Folly is bound up in the heart of a child,
but the rod of discipline will drive it far away.

16 One who oppresses the poor to increase his wealth
and one who gives gifts to the rich—both come to poverty. 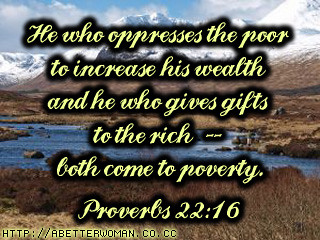 Thirty Sayings of the Wise

17Pay attention and turn your ear to the sayings of the wise;
apply your heart to what I teach,
18for it is pleasing when you keep them in your heart
and have all of them ready on your lips.
19So that your trust may be in The Lord,
I teach you today, even you.
20Have I not written thirty sayings for you,
sayings of counsel and knowledge,
21teaching you to be honest and to speak the truth,
so that you bring back truthful reports
to those you serve?

22Do not exploit the poor because they are poor
and do not crush the needy in court,
23for The Lord Will Take Up their case
and Will Exact life for life.

24Do not make friends with a hot-tempered person,
do not associate with one easily angered,
25or you may learn their ways
and get yourself ensnared.

26Do not be one who shakes hands in pledge
or puts up security for debts;
27if you lack the means to pay,
your very bed will be snatched from under you.

28Do not move an ancient boundary stone
set up by your ancestors.

29Do you see someone skilled in their work?
They will serve before kings;
they will not serve before officials of low rank.

Humility is the Fear of The LORD; its wages are riches and honor and life.

“HE Has Shown you, O mortal, what is good. And What Does The LORD Require of you? To act justly and to love mercy and to walk humbly with your GOD.”

True religion does consist—in humility and the Fear of The LORD; that is, walking humbly with GOD as the prophet Hosea said.

We must so reverence GOD’S Majesty and Authority as to submit with all humility to the Commands of HIS WORD and the disposals of HIS Providence. We must have such low thoughts of ourselves as to behave humbly towards GOD and man. Where the Fear of GOD is there will be humility.

What is to be gotten by it—riches, and honor, and comfort, and long life, in this world, as far as GOD sees good, at least spiritual riches and honor in the Favor of GOD, and the promises and privileges of the Covenant of Grace, and eternal life at last.