Are You Thirsty? Come To JESUS To Quench Your Thirst


Invitation to the Thirsty 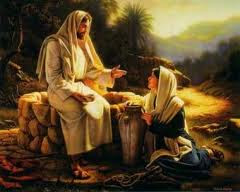 come to the waters;

and you who have no money,
come, buy and eat!
Come, buy wine and milk
without money and without cost.

2Why spend money on what is not bread,
and your labor on what does not satisfy?
Listen, listen to ME, and eat what is good,
and you will delight in the richest of fare.
3Give ear and Come to ME;
Listen, that you may live.
I Will Make an Everlasting Covenant with you,
my Faithful Love promised to David.
4See, I Have Made HIM a witness to the peoples,
a Ruler and Commander of the peoples.
5Surely YOU Will Summon nations YOU Know Not,
and nations YOU Do Not Know will come running to YOU,
because of The LORD YOUR GOD,
The HOLY ONE of Israel,
For HE Has Endowed YOU with splendor.”

6Seek The LORD While HE May Be Found;
call on HIM While HE Is Near.

7Let the wicked forsake their ways
and the unrighteous their thoughts.
Let them turn to The LORD, and HE Will Have Mercy On them,
and to our GOD, for HE Will Freely Pardon.

8“For MY Thoughts are not your thoughts,
neither are your ways MY Ways,” 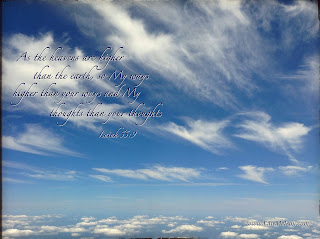 10As the rain and the snow
come down from heaven,
and do not return to it
without watering the earth
and making it bud and flourish,
so that it yields seed for the sower and bread for the eater,

11So Is MY WORD that goes out from MY Mouth:
It Will Not Return To ME empty,
but Will Accomplish What I Desire
and Achieve the Purpose for which I Sent it.

12You will go out in joy
and be led forth in peace;
the mountains and hills
will burst into song before you,
and all the trees of the field
will clap their hands.
13Instead of the thornbush will grow the juniper,
and instead of briers the myrtle will grow.
This will be for The LORD'S Renown,
for an everlasting sign,
that will endure forever.”

This chapter is closely connected in sense with the preceding chapter. It flows from the doctrines stated in Isaiah 53:1-12, and is designed to state what would follow from the Coming of The MESSIAH. It would result from that work that the most free and full invitations would be extended to all people to return to GOD, and to obtain HIS Favor. There would be such ample provision made for the salvation of human beings, that the most liberal invitations could be extended to sinners.

The main idea in the chapter is that the effect of the Work of The REDEEMER would be to lay the foundation for a universal invitation to people to come and be saved. So ample would be the merits of HIS Death Isaiah 53:1-12, that all might come and partake of eternal life.

It may be regarded as comprising the following parts:

I. A universal invitation to come and embrace the Provisions of Mercy.

1. All were invited to come, even they who were the most poor and needy, who had no money, as freely as to running waters and streams Isaiah 55:1.

2. They were now regarded as spending their money and their labor for that which produced no permanent satisfaction - descriptive of the world in its vain efforts to find enjoyment Isaiah 55:2.

3. If they would come to GOD they should live, and HE Would Make With them an eternal Covenant Isaiah 55:3.

II. To encourage them to this, the assurance is presented that GOD Had Given The MESSIAH to be a Leader of the people, and that under him distant nations should embrace the truth and be saved Isaiah 55:4-5.

III. In view of the fullness of the Provisions of Mercy, and of the fact that a great leader had been provided, all are encouraged to come and seek GOD. This invitation is pressed on their attention by several considerations:

1. YAHWEH Might now Be Found, and HE Was Ready To Pardon abundantly all sinners who were disposed to forsake the error of their way and to return to HIM Isaiah 55:6-7.

2. GOD Shows that HIS Plans Were high above those of people, and HIS Thoughts more Elevated than theirs, and HIS Counsels Should Stand. The rain descended on the earth and accomplished HIS Great Plans, and so it would be with HIS WORD. HIS Promises Would Be Fulfilled, and HIS Designs Would Take Effect, and there was, therefore, every encouragement to come, and partake of HIS Favor and HIS Grace Isaiah 55:8-11.

3. There should be rich and abundant blessings attending their return to GOD, and universal rejoicing from their embracing the Religion of The REDEEMER, and becoming interested in His Mercy and Salvation Isaiah 55:12-13.

There is not to be found in the Bible a chapter more replete with rich invitations than this, nor perhaps is there anywhere to be found one of more exquisite beauty. To the end of the world it will stand as the fullest conceivable demonstration that GOD Intended that the offers of salvation should be made to all people, and that HE Designs that HIS Gospel Shall Accomplish the great plans which HE Had in view When HE Devised the scheme of redemption.


While this precious chapter remains in the Book of GOD, no sinner need despair of salvation who is disposed to return to HIM; no one can plead that he is too great a sinner to be saved; no one can maintain successfully that the Provisions of Mercy are limited in their nature or their applicability to any portion of the race; and no minister of the Gospel need be desponding about the success of the work in which he is engaged. The Gospel shall just as certainly produce the effect which GOD Intended as the rain which comes down in fertilizing showers upon the dry and thirsty earth.