JEHOVAH Builds or Destroys The Nations


At the Potter’s House


1This Is The WORD That Came to Jeremiah from The LORD:

2“Go down to the potter’s house, and there I Will Give you MY Message.”


3So I went down to the potter’s house, and I saw him working at the wheel. 4But the pot he was shaping from the clay was marred in his hands; so the potter formed it into another pot, shaping it as seemed best to him. 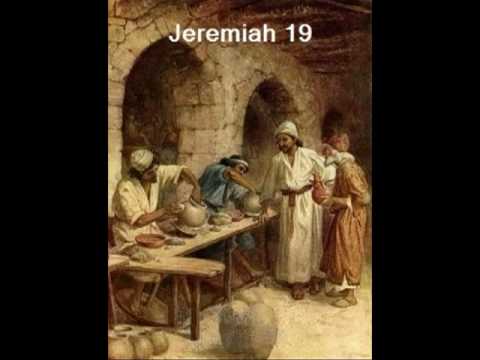 5Then The WORD of The LORD Came To me. 6


“Can I Not Do With you, Israel, as this potter

“Like clay in the hand of the potter, so are you in MY

11“Now therefore say to the people of Judah and those living in Jerusalem,


‘This Is What The LORD Says:


Look! I AM Preparing a disaster for you and Devising a plan against you. So turn from your evil ways, each one of you, and reform your ways and your actions.’12But they will reply, ‘It’s no use. We will continue with our own plans; we will all follow the stubbornness of our evil hearts.’ ”

13Therefore This Is What The LORD Says:

“Inquire among the nations:
Who has ever heard anything like this?
A most horrible thing has been done
by Virgin Israel.
14Does the snow of Lebanon
ever vanish from its rocky slopes?
Do its cool waters from distant sources
ever stop flowing?a
15Yet my people have forgotten ME;
they burn incense to worthless idols,
which made them stumble in their ways,
in the ancient paths.
They made them walk in byways,
on roads not built up.
16Their land will be an object of horror
and of lasting scorn;
all who pass by will be appalled
and will shake their heads.
17Like a wind from the east,
I Will Scatter them before their enemies;

18They said, “Come, let’s make plans against Jeremiah; for the teaching of the Law by the priest will not cease, nor will counsel from the wise, nor the word from the prophets. So come, let’s attack him with our tongues and pay no attention to anything he says.”

19Listen To me, LORD;
Hear what my accusers are saying!
20Should good be repaid with evil?
Yet they have dug a pit for me.
Remember that I stood Before YOU
and spoke in their behalf
to turn YOUR Wrath away from them.
21So give their children over to famine;
Hand them over to the power of the sword.
Let their wives be made childless and widows;
Let their men be put to death,
their young men slain by the sword in battle.
22Let a cry be heard from their houses
When YOU suddenly Bring invaders against them,
for they have dug a pit to capture me
and have hidden snares for my feet.
23But YOU, LORD, Know
all their plots to kill me.
Do Not Forgive their crimes
or Blot Out their sins from YOUR Sight.
Let them be overthrown Before YOU;
Deal with them in the time of YOUR Anger.

This chapter expresses the SOVEREIGN Power of GOD over HIS creatures, and HIS usual methods of dealing with them; it threatens destruction to the Jews for their idolatry; and is closed with the prophet's complaint of his persecutors, and with imprecations upon them.

The SOVEREIGN Power of GOD Is Expressed under the simile of a potter working in his shop, and making and marring vessels at pleasure, Jeremiah 18:1; the application of which to GOD, and the house of Israel, is in Jeremiah 18:5; and is illustrated by HIS usual dealings with kingdoms and nations; for though HE Is The SOVEREIGN Being, yet HE Acts both in a kind and equitable way; and as the potter changes his work, so HE Changes the Dispensations of HIS Providence, of which two instances are given; the one is, that having threatened ruin to a nation, upon their repentance and good behavior HE Revokes the threatening, Jeremiah 18:7; and the other is, that having made a declaration of good to a people, upon their sin and disobedience HE Recalls it, and Punishes them for their wickedness, Jeremiah 18:9.


Then follows a prophecy of the destruction of the Jews in particular, in which they are exhorted to repentance to prevent it; their obstinacy is observed; their folly in departing from GOD, and worshiping idols, is exposed; and they are threatened with utter ruin, Jeremiah 18:11; the conspiracy and evil designs of the Jews against the prophet, their malice and ingratitude, are complained of by him, Jeremiah 18:18; his imprecations upon them, and prayers for their destruction, are delivered out in Jeremiah 18:21.