JESUS Creates The New Heavens and The New Earth

2All day long I Have Held Out MY Hands
to an obstinate people,
who walk in ways not good,
pursuing their own imaginations— 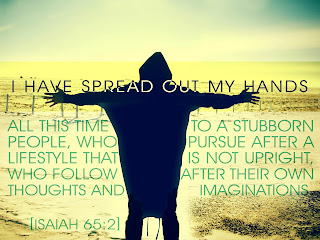 3a people who continually provoke ME
To MY Very Face,
offering sacrifices in gardens
and burning incense on altars of brick;
4who sit among the graves
and spend their nights keeping secret vigil;
who eat the flesh of pigs,
and whose pots hold broth of impure meat;
5who say, ‘Keep away; don’t come near me,
for I am too sacred for you!’
Such people are smoke in MY Nostrils,
a fire that keeps burning all day.
6“See, it stands written Before ME:
I Will Not Keep Silent but Will Pay Back in full;
I Will Pay it Back into their laps—
7both your sins and the sins of your ancestors,”
Says The LORD.
“Because they burned sacrifices on the mountains
and defied ME on the hills,
I Will Measure into their laps
the full payment for their former deeds.”

8This Is What The LORD Says:

“As when juice is still found in a cluster of grapes
and people say, ‘Don’t destroy it,
there is still a blessing in it,’
so Will I Do in behalf of MY servants;
I Will Not Destroy them all.
9I Will Bring Forth descendants from Jacob,
and from Judah those who will possess MY Mountains;
My chosen people will inherit them,
and there will MY servants live.
10Sharon will become a pasture for flocks,
and the Valley of Achor a resting place for herds,
for MY people who seek ME.
11“But as for you who forsake The LORD
and forget MY Holy Mountain,
who spread a table for Fortune
and fill bowls of mixed wine for Destiny,
12I Will Destine you for the sword,
and all of you will fall in the slaughter;
for I Called but you did not answer,
I Spoke but you did not listen.
You did evil in MY Sight
and chose what displeases ME.”

13Therefore This Is What The SOVEREIGN LORD Says:


New Heavens and a New Earth

17 “See, I Will Create new heavens and a new

earth. The former things will not be

remembered, nor will they come to mind.

18But be glad and rejoice forever
in What I Will Create,
for I will create Jerusalem to be a delight
and its people a joy.
19I Will Rejoice Over Jerusalem
and Take Delight in MY people;
the sound of weeping and of crying
will be heard in it no more.

21They will build houses and dwell in them;
they will plant vineyards and eat their fruit.
22No longer will they build houses and others live in them,
or plant and others eat.
For as the days of a tree,
so will be the days of MY people;
MY chosen ones will long enjoy
the work of their hands.
23They will not labor in vain,
nor will they bear children doomed to misfortune;
for they will be a people blessed by The LORD,
they and their descendants with them.
24Before they call I will answer;
while they are still speaking I will hear. 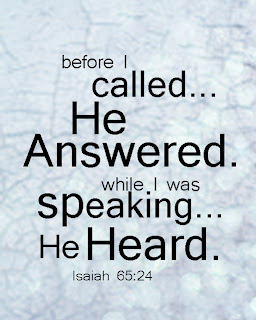 25The wolf and the lamb will feed together,
and the lion will eat straw like the ox,
and dust will be the serpent’s food.
They will neither harm nor destroy
on all MY Holy Mountain,”

We have here a vindication of GOD'S dealings with the Jews, Isaiah 65:1-2. To this end the prophet points out their great hypocrisy, and gives a particular enumeration of their dreadful abominations, many of which were committed under the guise of sanctity, Isaiah 65:3-5. For their horrid impieties, the Wrath of GOD Shall certainly Come Upon them to the uttermost; a prediction which was exactly fulfilled in the first and second centuries in the reigns of the Roman emperors Vespasian, Titus, and Hadrian, when the whole Jewish polity was dissolved, and the people dispersed all over the world, Isaiah 65:6, Isaiah 65:7.

Though GOD Had Rejected the Jews, and called the Gentiles, who did not seek HIM, (Romans 9:24-26), yet a remnant from among the former shall be preserved, to whom HE Will in due time Make Good all HIS Promises, Isaiah 65:8-10. Denunciation of Divine Vengeance against those idolaters, which, from the context, and from the chronological order of the events predicted, have a plain reference to the idolatries practiced by Antichrist under the guise of Christianity, Isaiah 65:11, Isaiah 65:12.

Dreadful fate which awaits these gross idolaters beautifully contrasted with the great blessedness reserved for the righteous, Isaiah 65:13-16. Future restoration of the posterity of Jacob, and the happy state of the world in general from that most glorious epoch, represented by the strong figure of the creation of new heavens and a new earth, wherein dwells righteousness, and into which no distress shall be permitted to enter, Isaiah 65:17-19.

In this new state of things the term of human life shall be greatly protracted, and shall possess none of that uncertainty which attaches to it in "the heavens and the earth which are now." This is elegantly illustrated by the longevity of a tree; manifestly alluding to the oak or cedar of Lebanon, some individuals of which are known to have lived from seven to ten centuries, Isaiah 65:20-23. Beautiful figures shadowing forth the profound peace and harmony in The KINGDOM of JESUS CHRIST, which shall immediately follow the total overthrow of Antichrist; with a most gracious promise that the great chain of Omnipotence shall be put upon every adversary, so that none will be able any longer to hurt and destroy in all GOD'S Holy Mountain, Isaiah 65:24, Isaiah 65:25.

This chapter contains a defense of GOD'S proceedings in regard to the Jews, with reference to their complaint in the chapter preceding. GOD Is Introduced Declaring that HE Had Called the Gentiles, though they had not sought HIM; and Had Rejected HIS Own people for their refusal to attend to HIS Repeated Call; for their obstinate disobedience, their idolatrous practices, and detestable hypocrisy. That nevertheless HE Would Not Destroy them all; but would preserve a remnant, to whom HE Would Make Good HIS ancient Promises. Severe punishments are threatened to the apostates; and great rewards are promised to the obedient in a future flourishing state of The KINGDOM of CHRIST.