JESUS Gives HIS Peace That The World Can Not Give


the bones of the kings and officials of Judah, the bones of the priests and prophets, and the bones of the people of Jerusalem will be removed from their graves. 2They will be exposed to the sun and the moon and all the stars of the heavens, which they have loved and served and which they have followed and consulted and worshiped. They will not be gathered up or buried, but will be like dung lying on the ground. 3Wherever I banish them, all the survivors of this evil nation will prefer death to life,

“ ‘When people fall down, do they not get up?
When someone turns away, do they not return?
5Why then have these people turned away?
Why does Jerusalem always turn away?
They cling to deceit;
they refuse to return.
6I Have Listened Attentively,
but they do not say what is right.
None of them repent of their wickedness,
saying, “What have I done?”
Each pursues their own course
like a horse charging into battle.
7Even the stork in the sky
knows her appointed seasons,
and the dove, the swift and the thrush
observe the time of their migration.
But MY people do not know
the requirements of The LORD.

8“ ‘How can you say, “We are wise,
for we have The Law of The LORD,”
when actually the lying pen of the scribes
has handled it falsely?
9The wise will be put to shame;
they will be dismayed and trapped.
Since they have rejected The WORD of The LORD,
what kind of wisdom do they have?

10Therefore I Will Give their wives to other men
and their fields to new owners.
From the least to the greatest,
all are greedy for gain;
prophets and priests alike,
all practice deceit.

11They dress the wound of MY people
as though it were not serious.

when there is no peace.

12Are they ashamed of their detestable conduct?
No, they have no shame at all;
they do not even know how to blush.
So they will fall among the fallen;
they will be brought down when they are punished,

14Why are we sitting here?
Gather together!
Let us flee to the fortified cities
and perish there!
For The LORD our GOD Has Doomed us to perish
and Given us poisoned water to drink,
because we have sinned against Him.
15We hoped for peace
but no good has come,
for a time of healing
but there is only terror.
16The snorting of the enemy’s horses
is heard from Dan;
at the neighing of their stallions
the whole land trembles.
They have come to devour
the land and everything in it,
the city and all who live there.

17“See, I Will Send venomous snakes among you,
vipers that cannot be charmed,
and they will bite you,”

18YOU WHO Are my Comforter in sorrow,
my heart is faint within me.
19Listen to the cry of my people
from a land far away:
“Is The LORD Not In Zion?
Is her king no longer there?”

“Why have they aroused MY Anger with their images,

with their worthless foreign idols?”

20“The harvest is past,
the summer has ended,
and we are not saved.”
21Since my people are crushed, I am crushed;
I mourn, and horror grips me.

22Is there no balm in Gilead?
Is there no physician there?
Why then is there no healing
for the wound of my people? 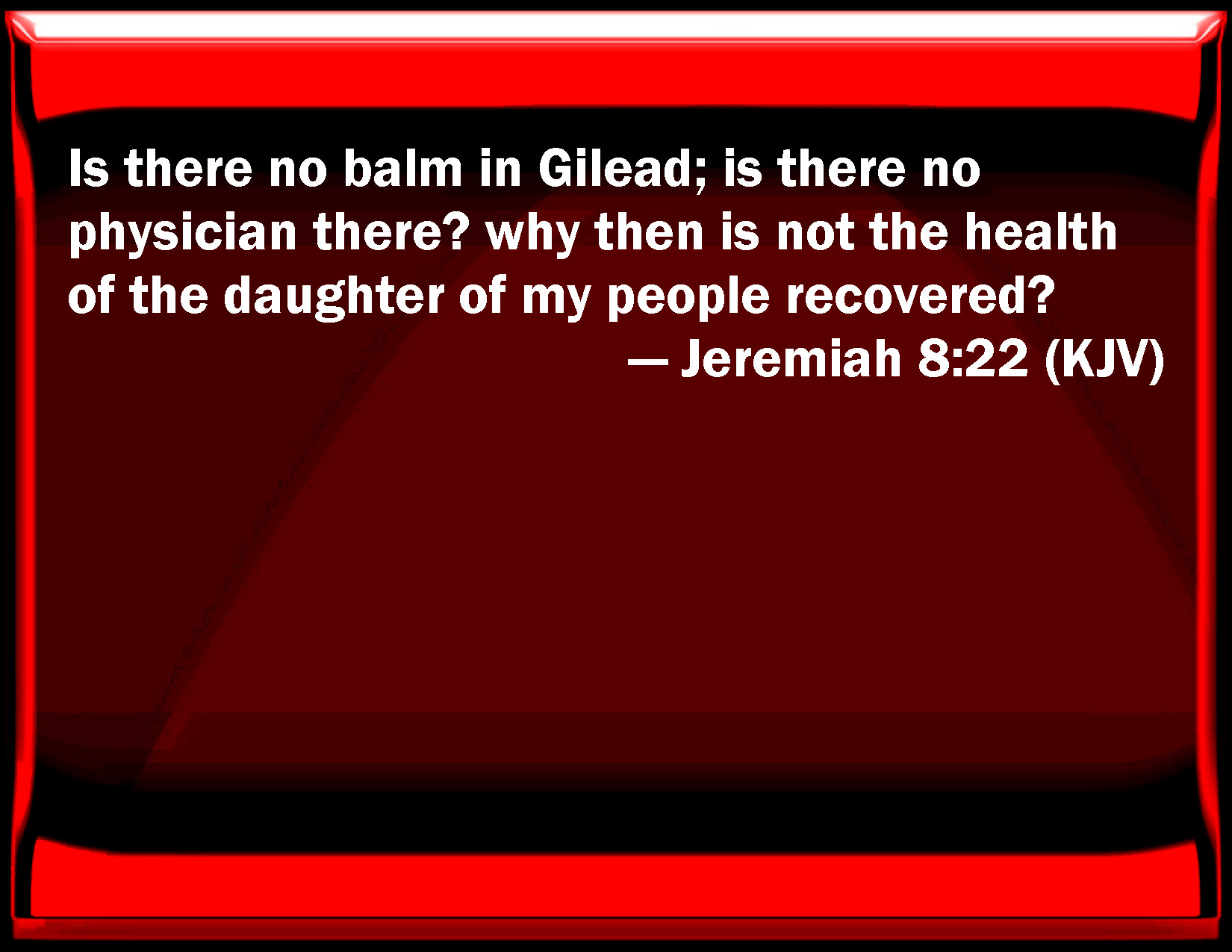 In this chapter the prophet goes on to denounce grievous calamities upon the people of the Jews; such as would make death more eligible than life; and that because of their idolatry, Jeremiah 8:1 and also because of their heinous backsliding in other respects, and continuance in them, Jeremiah 8:4 likewise their impenitence and stupidity, Jeremiah 8:6 their vain conceit of themselves and their own wisdom; their false interpretation of Scripture, and their rejection of The WORD of GOD, Jeremiah 8:8.

And their covetousness, for which it is said their wives and fields should be given to others, Jeremiah 8:10, their flattery of the people, and their impudence, on account of which, ruin and consumption, and a blast on their vines and fig trees, are threatened, Jeremiah 8:11, their consternation is described, by their fleeing to their defensed cities; by their sad disappointment in the expectation of peace and prosperity; and the near approach of their enemies; devouring their land, and all in it; who are compared to serpents and cockatrices that cannot be charmed, Jeremiah 8:14 and the chapter is closed with the prophet's expressions of sorrow and concern for his people, because of their distress their idolatry had brought upon them; and because of their hopeless, and seemingly irrecoverable, state and condition, Jeremiah 8:18.