JESUS Is The CREATOR Of All Things, Seen Or Unseen


1Hear What The LORD Says to you, people of Israel.


2This Is What The LORD Says:

“Do not learn the ways of the nations
or be terrified by signs in the heavens,
though the nations are terrified by them.
3For the practices of the peoples are worthless;
they cut a tree out of the forest,
and a craftsman shapes it with his chisel.

4They adorn it with silver and gold;
they fasten it with hammer and nails
so it will not totter.
5Like a scarecrow in a cucumber field,
their idols cannot speak;
they must be carried
because they cannot walk.
Do not fear them;
they can do no harm
nor can they do any good.”

6No one is Like YOU, LORD;
YOU Are Great,
and YOUR Name Is Mighty in Power.

7Who should not fear YOU,
KING of the nations?
This Is YOUR Due.
Among all the wise leaders of the nations
and in all their kingdoms,
there is no one like YOU.

8They are all senseless and foolish;
they are taught by worthless wooden idols.
9Hammered silver is brought from Tarshish
and gold from Uphaz.
What the craftsman and goldsmith have made
is then dressed in blue and purple—
all made by skilled workers.

10But The LORD Is The True GOD;
HE Is The Living GOD, The Eternal KING.

When HE Is Angry, the earth trembles;
the nations cannot endure HIS Wrath.

‘These gods, who did not make the heavens and the earth, will perish from the earth and from under the heavens.’ ”a

12But GOD Made the earth by HIS Power; 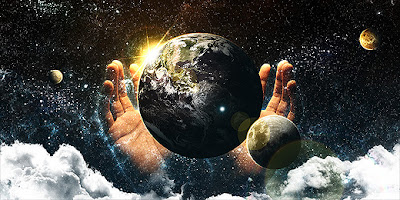 HE Founded the world by HIS Wisdom and stretched out the heavens by HIS Understanding.

13When HE Thunders, the waters in the heavens roar;
HE Makes clouds rise from the ends of the earth.
HE Sends lightning with the rain
and Brings Out the wind from His storehouses.
14Everyone is senseless and without knowledge;
every goldsmith is shamed by his idols.
The images he makes are a fraud;
they have no breath in them.
15They are worthless, the objects of mockery;
when their judgment comes, they will perish.

16HE WHO Is The Portion of Jacob Is Not like these,
for HE Is The Maker of all things,
including Israel, the people of His Inheritance—
The LORD ALMIGHTY Is HIS Name.


17Gather up your belongings to leave the land,
you who live under siege.

18For This Is What The LORD Says:

“At this time I Will Hurl Out
those who live in this land;
I Will Bring distress on them
so that they may be captured.”

19Woe to me because of my injury!
My wound is incurable!
Yet I said to myself,
“This is my sickness, and I must endure it.”
20My tent is destroyed;
all its ropes are snapped.
My children are gone from me and are no more;
no one is left now to pitch my tent
or to set up my shelter.
21The shepherds are senseless
and do not inquire of The LORD;
so they do not prosper
and all their flock is scattered.
22Listen! The report is coming—
a great commotion from the land of the north!
It will make the towns of Judah desolate,
a haunt of jackals.


23LORD, I know that people’s lives are not their own;
it is not for them to direct their steps.
24Discipline me, LORD, but only in due measure—
not in YOUR Anger,
or YOU Will Reduce me to nothing.

The Jews, about to be carried into captivity, are here warned against the superstition and idolatry of that country to which they were going. Chaldea was greatly addicted to astrology, and therefore the prophet begins with warning them against it, Jeremiah 10:1, Jeremiah 10:2.

He then exposes the absurdity of idolatry in short but elegant satire; in the midst of which he turns to The ONE True GOD, Whose adorable attributes repeatedly strike in view and contrast HIS infinite perfections with those despicable foolishness which the blinded nations fear, Jeremiah 10:3-16.