JESUS Made A New Covenant In HIS Blood

The Covenant Is Broken

1This Is The WORD That Came to Jeremiah From The LORD:

2“Listen to the terms of this covenant and tell them to the people of Judah and to those who live in Jerusalem. 3Tell them that This Is What The LORD, The GOD of Israel, Says: ‘Cursed is the one who does not obey the terms of this Covenant— 4the terms I Commanded your ancestors when I Brought them out of Egypt, out of the iron-smelting furnace.’ I Said, ‘Obey ME and do everything I Command you, and you will be MY people, and I Will Be your GOD. 5Then I Will Fulfill the oath I Swore to your ancestors, To Give them a land flowing with milk and honey’—the land you possess today.”

6The LORD Said to me,

“Proclaim all these WORDS in the towns of Judah and in the streets of Jerusalem: ‘Listen to the terms of this Covenant and follow them. 7From the time I Brought your ancestors up from Egypt until today, I Warned them again and again, saying,


8But they did not listen or pay attention; 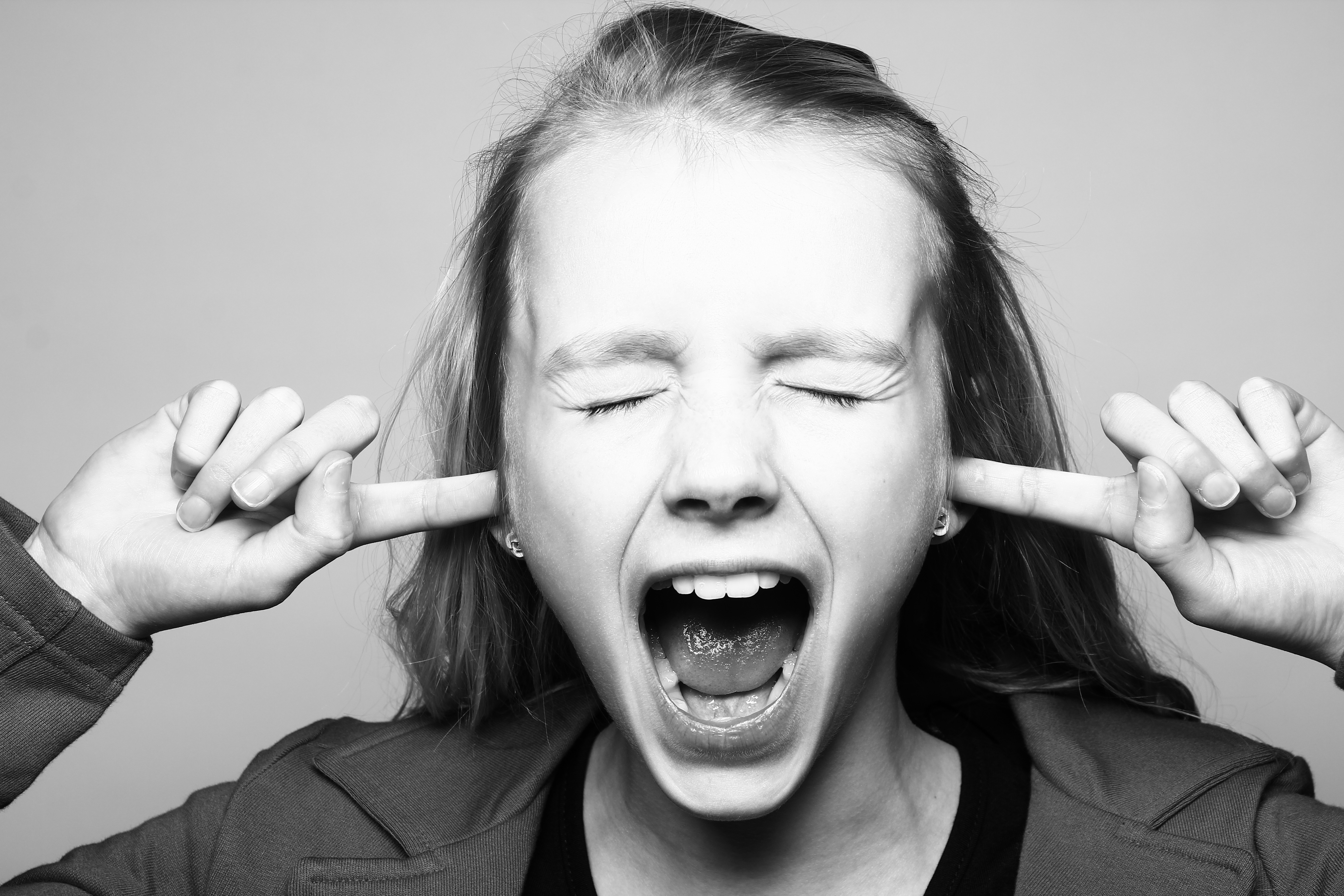 instead, they followed the stubbornness of their evil hearts. So I Brought On them all the curses of the Covenant I Had Commanded them to follow but that they did not keep.’ ”

9Then The LORD Said to me,


“There is a conspiracy among the people of Judah and those who live in Jerusalem. 10They have returned to the sins of their ancestors, who refused to listen to MY WORDS. They have followed other gods to serve them. Both Israel and Judah have broken the Covenant I Made With their ancestors. 11Therefore This Is What The LORD Says: ‘I Will Bring On them a disaster they cannot escape. Although they cry out to ME, I Will Not Listen To them. 12The towns of Judah and the people of Jerusalem will go and cry out to the gods to whom they burn incense, but they will not help them at all when disaster strikes. 13You, Judah, have as many gods as you have towns; and the altars you have set up to burn incense to that shameful god Baal are as many as the streets of Jerusalem.’

14 “Do not pray for this people or offer any plea or petition for them, because I Will Not Listen when they call to ME in the time of their distress.

15“What is MY beloved doing in MY Temple
as she, with many others, works out her evil schemes?
Can consecrated meat avert your punishment?
When you engage in your wickedness,
then you rejoice.a ”

16The LORD Called you a thriving olive tree
with fruit beautiful in form. 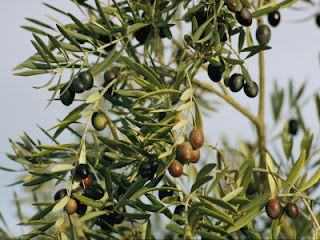 But with the roar of a mighty storm
HE Will Set it on fire,
and its branches will be broken.

17The LORD ALMIGHTY, WHO Planted you, Has Decreed disaster for you, because the people of both Israel and Judah have done evil and aroused MY Anger by burning incense to Baal.


18Because The LORD Revealed their plot to me, I knew it, for at that time HE Showed me what they were doing. 19I had been like a gentle lamb led to the slaughter; I did not realize that they had plotted against me, saying,

“Let us destroy the tree and its fruit;
let us cut him off from the land of the living,
that his name be remembered no more.”

20But YOU, LORD ALMIGHTY, WHO Judge righteously
and Test the heart and mind,
Let me see YOUR Vengeance on them,
for to YOU I have committed my cause.

21Therefore This Is What The LORD Says about the people of Anathoth who are threatening to kill you, saying, 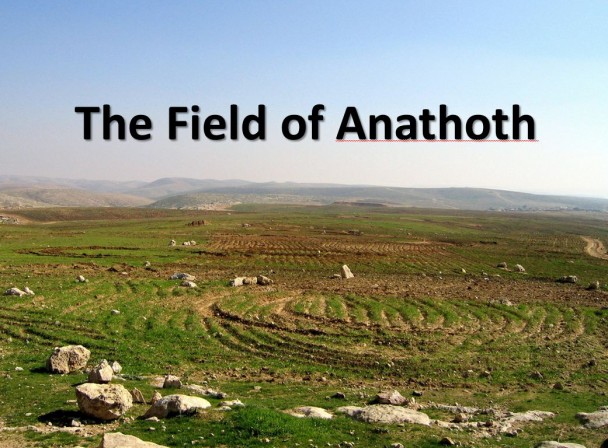 22Therefore This Is What The LORD ALMIGHTY Says:

“I Will Punish them. Their young men will die by the sword, their sons and daughters by famine. 23Not even a remnant will be left to them, Because I Will Bring disaster on the people of Anathoth in the year of their punishment.” 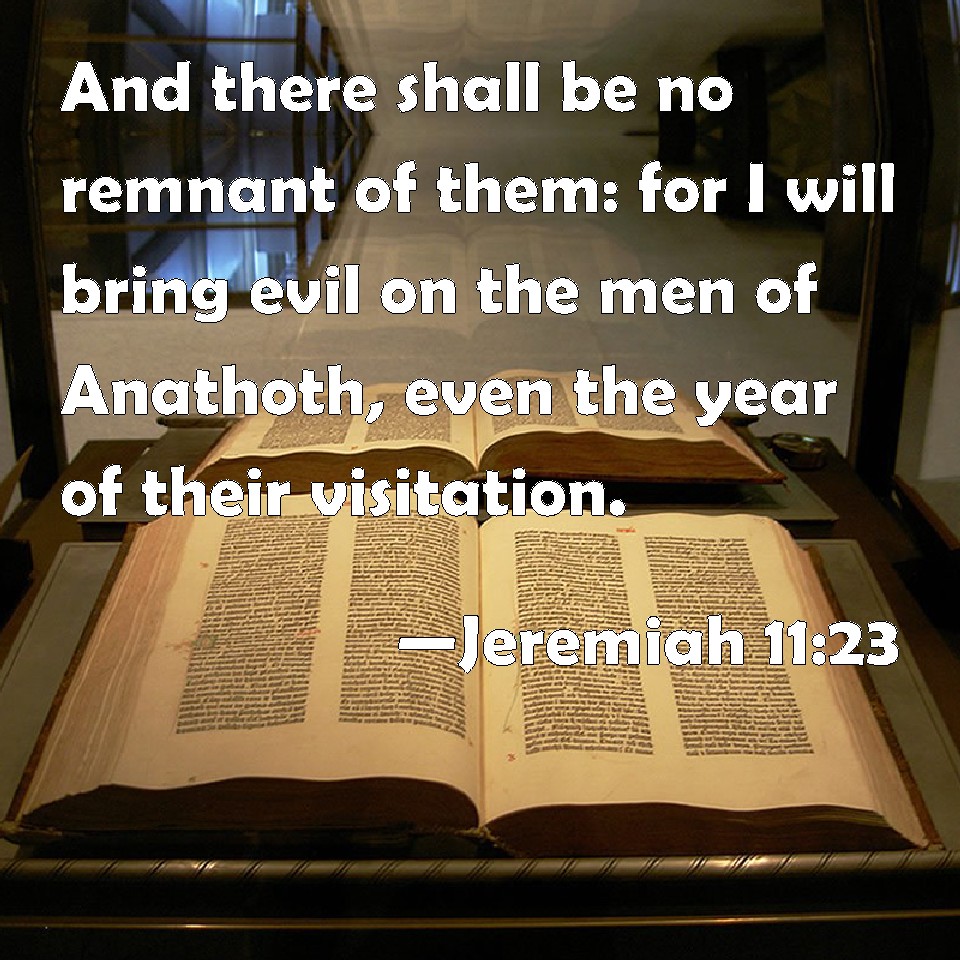 This chapter gives an account of the Covenant GOD Had Made with the people of the Jews; their breach of it; and the evils threatened them on that account; and particularly against the men of Anathoth, for their ill treatment of the prophet.

It begins with the order to Jeremiah to rehearse The WORDS of The Covenant in the ears of the men of Judah and Jerusalem, Jeremiah 11:1, which covenant is described by the sanction of it; a curse in case of disobedience; and a promise of being their GOD, and bringing them into the good land, in case of obedience; and by the time when it was made, when the Israelites were brought out of Egypt, Jeremiah 10:3, which order, the prophet agreeing to, is repeated, Jeremiah 10:5 declaring the earnest protestation and exhortation of GOD to obey it, which they not observing, were threatened with the curses of it, Jeremiah 11:7.

The present Jews doing as their forefathers had done, breaking the Covenant, particularly by their idolatry, are threatened also with punishment they should not escape, Jeremiah 11:9 which is aggravated by a resolution to show no regard to their cries, Jeremiah 11:11, by the impotence of their idols to save them, though so numerous, Jeremiah 11:12, by forbidding the prophet to pray for them, Jeremiah 11:14, by their having no longer a place and protection in the House of GOD, because of their wickedness, Jeremiah 11:15.

By comparing their former and present state together, having been as a beautiful and fruitful olive tree, but now burnt, and its branches broken, Jeremiah 11:16, next follows an account of a design of the men of Anathoth against the prophet, to take away his life, which he was ignorant of, till The LORD Gave him knowledge of it, Jeremiah 11:17, when he imprecates vengeance on them, Jeremiah 11:20, and, under a spirit of prophecy from The LORD, foretells their utter ruin and destruction, Jeremiah 11:21.