Nothing Is Hidden From The Eyes Of JEHOVAH


1Then The WORD of The LORD Came to me:

2“You must not marry and have sons or daughters in this place.”

4“They will die of deadly diseases. They will not be

mourned or buried but will be like dung lying on the

ground. They will perish by sword and famine, and their

dead bodies will become food for the birds and the wild

5For This Is What The LORD Says:


“Do not enter a house where there is a funeral meal; do not go to mourn or show sympathy, because I have withdrawn MY Blessing, MY Love and MY Pity from this people,”


6“Both high and low will die in this land. They will not be buried or mourned, and no one will cut themselves or shave their head for the dead. 7No one will offer food to comfort those who mourn for the dead—not even for a father or a mother—nor will anyone give them a drink to console them.

8“And do not enter a house where there is feasting and sit down to eat and drink.


9For This Is What The LORD ALMIGHTY, The GOD of Israel, Says:


Before your eyes and in your days I Will Bring an end to the sounds of joy and gladness and to the voices of bride and bridegroom in this place.

10“When you tell these people all this and they ask you, ‘Why Has The LORD Decreed such a great disaster against us? What wrong have we done? What sin have we committed against The LORD our GOD?’

‘It is because your ancestors forsook ME,’


‘and followed other gods and served and worshiped them. They forsook ME and did not keep MY Law. 12But you have behaved more wickedly than your ancestors. See how all of you are following the stubbornness of your evil hearts instead of obeying ME. 13So I Will Throw you out of this land into a land neither you nor your ancestors have known, and there you will serve other gods day and night, For I Will Show you no Favor.’ 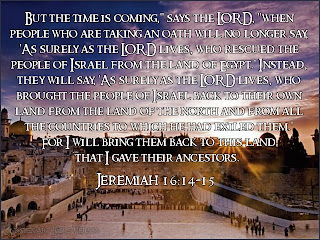 16“But now I Will Send for many fishermen,”


“and they will catch them. After that I Will Send for many hunters, and they will hunt them down on every mountain and hill and from the crevices of the rocks.

17MY Eyes Are On all their ways; they are not hidden from ME, nor is their sin concealed from MY Eyes. 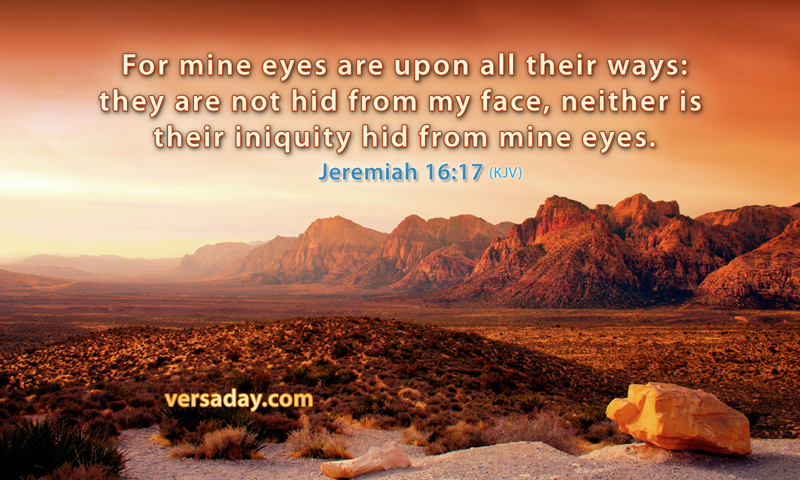 18I Will Repay them double for their wickedness and their sin, because they have defiled MY Land with the lifeless forms of their vile images and have filled MY Inheritance with their detestable idols.”

19LORD, my Strength and my Fortress,
my Refuge in time of distress,
to YOU the nations will come
from the ends of the earth and say,
“Our ancestors possessed nothing but false gods,
worthless idols that did them no good. 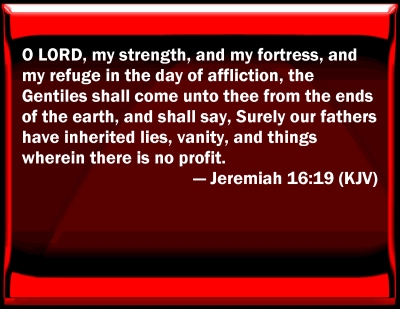 20 Do people make their own gods?
Yes, but they are not gods!”

On account of the evils which threatened his country, Jeremiah is forbidden to encumber himself with a wife and family, or to bear any share in the little joys and sorrows of his neighbors, which were to be forgotten and absorbed in those public calamities, Jeremiah 16:1-9, which their sins should draw on them, Jeremiah 16:10-13.