Only GOD THE HOLY SPIRIT Can Change Our Heart


1This Is What The LORD Said to me:

3Then The WORD of The LORD Came to me a second time:


4“Take the belt you bought and are wearing around your waist, and go now to Peratha and hide it there in a crevice in the rocks.”


5So I went and hid it at Perath, As The LORD Told me.

6Many days later The LORD Said to me,


“Go now to Perath and get the belt I told you to hide there.” 7So I went to Perath and dug up the belt and took it from the place where I had hidden it, but now it was ruined and completely useless.

8Then The WORD of The LORD Came to me:

9“This Is What The LORD Says:


‘In the same way I Will Ruin the pride of Judah and the great pride of Jerusalem. 10These wicked people, who refuse to listen to MY WORDS, who follow the stubbornness of their hearts and go after other gods to serve and worship them, will be like this belt—completely useless! 11For as a belt is bound around the waist, so I bound all the people of Israel and all the people of Judah to ME,’


‘to be MY people for MY renown and praise and honor. But they have not listened.’


Every wineskin should be filled with wine.’


And if they say to you,

‘Don’t we know that every wineskin should be filled with wine?’

13Then tell them, ‘This Is What The LORD Says:


I AM Going To Fill with drunkenness all who live in this land, including the kings who sit on David’s throne, the priests, the prophets and all those living in Jerusalem. 14I Will Smash them one against the other, parents and children alike,


I Will Allow no Pity or Mercy or Compassion to Keep ME from Destroying them.’ ”

15Hear and pay attention,
do not be arrogant,
For The LORD Has Spoken.
16Give Glory To The LORD your GOD
Before HE Brings the darkness,
before your feet stumble
on the darkening hills.
You hope for light,
but HE Will Turn it to utter darkness
and Change it to deep gloom.
17If you do not listen,
I will weep in secret
because of your pride;
my eyes will weep bitterly,
overflowing with tears,
because The LORD'S flock will be taken captive.
18Say to the king and to the queen mother,
“Come down from your thrones,
for your glorious crowns
will fall from your heads.”
19The cities in the Negev will be shut up,
and there will be no one to open them.
All Judah will be carried into exile,
carried completely away.
20Look up and see
those who are coming from the north.
Where is the flock that was entrusted to you,
the sheep of which you boasted?
21What will you say When The LORD Sets Over you
those you cultivated as your special allies?
Will not pain grip you
like that of a woman in labor?
22And if you ask yourself,
“Why has this happened to me?”—
it is because of your many sins
that your skirts have been torn off
and your body mistreated.

23 Can an Ethiopian change his skin 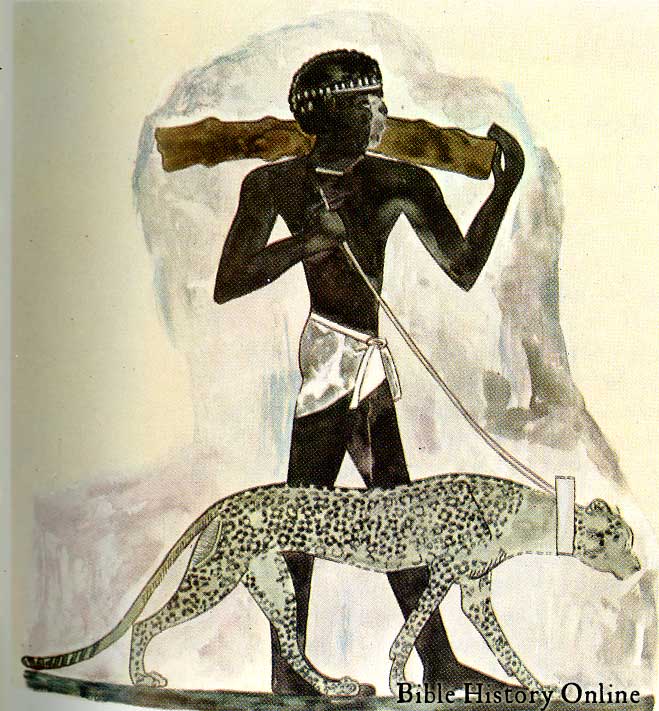 or a leopard its spots? 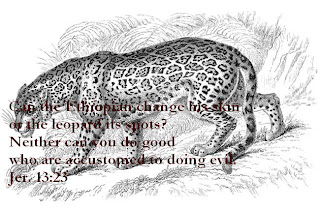 Neither can you do good

who are accustomed to doing evil.

24“I Will Scatter you like chaff
driven by the desert wind.

25This is your lot,
the portion I Have Decreed for you,”


“because you have forgotten ME
and trusted in false gods.
26I Will Pull Up your skirts over your face
that your shame may be seen—
27your adulteries and lustful neighings,
your shameless prostitution!
I have seen your detestable acts
on the hills and in the fields.
Woe to you, Jerusalem!
How long will you be unclean?”

In this chapter, under the similes of a girdle and bottles of wine, the destruction of the Jews is set forth. Some exhortations are given them to repent and humble themselves, even men of all ranks and degrees among them; and their sins, the source of their calamities, are pointed out to them.

An order is given to the prophet to get him a linen girdle, with instructions what to do with it, and which he observed, Jeremiah 13:1, a fresh order to take it and hide it in the hole of a rock by the river Euphrates, which he accordingly did, Jeremiah 13:3 and he is bid a third time to go and take it from thence, which he did; when he found it spoiled, and good for nothing, Jeremiah 13:6, then follows the application of this simile, or the signification of this sign; that in like manner the pride of Judah and Jerusalem should be marred, and for their wickedness and idolatry should become good for nothing, like that girdle; whereas they ought to have cleaved to The LORD, as a girdle does to a man's loins, and to have been an honorable people to HIM, Jeremiah 13:8.

By the simile of bottles filled with wine is signified that all the inhabitants of the land, king, priests, prophets, and common people, should be like drunken men, that should dash one against another, and destroy each other, which the Mercy of GOD Would Not Prevent, Jeremiah 13:12, some exhortations are made to the people in general, to be humble, and confess their sins, and give Glory to GOD, before it was too late; which are enforced by the prophet's affectionate concern for them, Jeremiah 13:15 and to the king and queen in particular, since their crown and kingdom were about to be taken from them; the cities, in the southern parts, going to be shut up, and not opened; and even the whole land of Judea, and all its inhabitants, in a little time would be carried captive, Jeremiah 13:18.

And, to certify them of the truth of these things, they are bid to look to the north, from whence the enemy was coming to carry them captive, even the beautiful flock committed to their care, Jeremiah 13:20, and to consider what they could say for themselves, when their punishment should come upon them suddenly, as the sorrows of a woman in travail, Jeremiah 13:21 and should they ask the reason of this, it was owing to the multitude of their iniquities, and to their habit and custom of sinning, which made their case desperate, Jeremiah 13:22, wherefore a resolution is taken to disperse them among the nations, and that this should be their lot and portion, because of their many abominations, and yet not without some concern that they might be purged from their iniquities, Jeremiah 13:24.