Serve The LORD JESUS, Not The Queen Of Heaven


1This Is The WORD That Came to Jeremiah From The LORD:

2“Stand at the gate of The LORD'S House and there Proclaim this message:

“ ‘Hear The WORD of The LORD, all you people of Judah

who come through these gates to worship The LORD.

3This Is What The LORD ALMIGHTY, The GOD of Israel, Says:

“Reform your ways and your actions, and I Will Let you live in this place. 4Do not trust in deceptive words and say,

The LORD, The Temple of The LORD!”


5If you really change your ways and your actions and deal with each other justly, 6if you do not oppress the foreigner, the fatherless or the widow and do not shed innocent blood in this place, and if you do not follow other gods to your own harm, 7then I Will Let you live in this place, in the land I Gave your ancestors for ever and ever. 8But look, you are trusting in deceptive words that are worthless.

9“ ‘Will you steal and murder, commit adultery and perjury,a burn incense to Baal and follow other gods you have not known, 10and then come and stand Before ME in this House, which bears MY Name, and say,


—safe to do all these detestable things?

11 Has this House, which bears MY

Name, become a den of robbers to you?

But I Have Been Watching!

12“ ‘Go now to the place in Shiloh where I first Made a Dwelling for MY Name, and see what I Did to it because of the wickedness of MY people Israel.

13While you were doing all these things,

I Spoke to you again and again, but you did not listen; I Called you, but you did not answer. 14Therefore, What I Did to Shiloh I Will now Do to the House That Bears MY Name, the Temple you trust in, the place I Gave to you and your ancestors. 15I Will Thrust you from MY Presence, just as I Did all your fellow Israelites, the people of Ephraim.’ 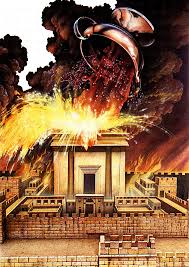 16“So do not pray for this people nor offer any plea or petition for them; do not plead with ME, For I Will Not Listen to you. 17Do you not see what they are doing in the towns of Judah and in the streets of Jerusalem? 18The children gather wood, the fathers light the fire, and the women knead the dough and make cakes to offer to the Queen of Heaven.

They pour out drink offerings to other gods to arouse MY Anger.

19But AM I The ONE they are provoking?

Are they not rather harming themselves, to their own shame?

20“ ‘Therefore This Is What The SOVEREIGN LORD Says:

MY Anger and MY Wrath Will Be Poured Out on this place—on man and beast, on the trees of the field and on the crops of your land—and it will burn and not be quenched.


Go ahead, add your burnt offerings to your other sacrifices and eat the meat yourselves! 22For When I Brought your ancestors out of Egypt and Spoke to them, I Did Not Just Give them Commands about burnt offerings and sacrifices, 23But I Gave them this Command:

Obey ME, and I Will Be your GOD and you will be MY people. Walk in obedience to all I Command you, that it may go well with you.

24But they did not listen or pay attention; instead, they followed the stubborn inclinations of their evil hearts. They went backward and not forward. 25From the time your ancestors left Egypt until now, day after day, again and again I Sent you MY servants the prophets. 26But they did not listen to ME or pay attention. They were stiff-necked and did more evil than their ancestors.’

27“When you tell them all this, they will not listen to you; when you call to them, they will not answer. 28Therefore say to them, ‘This is the nation that has not obeyed The LORD its GOD or responded to correction. Truth has perished; it has vanished from their lips.

29“ ‘Cut off your hair and throw it away; take up a lament on the barren heights, For The LORD Has Rejected and Abandoned this generation that is under HIS Wrath.

The Valley of Slaughter

30“ ‘The people of Judah have done evil in MY Eyes,

They have set up their detestable idols in the House that bears MY Name and have defiled it. 31They have built the high places of Topheth in the Valley of Ben Hinnom to burn their sons and daughters in the fire—something I Did Not Command, nor did it enter MY Mind. 32So beware, the days are coming,


when people will no longer call it Topheth or the Valley of Ben Hinnom, but the Valley of Slaughter, for they will bury the dead in Topheth until there is no more room. 33Then the carcasses of this people will become food for the birds and the wild animals, and there will be no one to frighten them away. 34I Will Bring an end to the sounds of joy and gladness and to the voices of bride and bridegroom in the towns of Judah and the streets of Jerusalem, for the land will become desolate.

Here begins another section of prophecy, ending with the ninth chapter. It opens with exhorting to reformation of life, without which the confidence of the Jews in their Temple is declared vain, Jeremiah 7:1-11. GOD Bids them to take warning from the fate of their brethren the Israelites, who had been carried away captive on account of their sins without any regard to that sacred place, Shiloh, where the Ark of GOD once Resided, Jeremiah 7:12-15.

The iniquities of Judah are so great in the Sight of GOD that the prophet is commanded not to intercede for the people, Jeremiah 7:16; the more especially as they persisted in provoking GOD by their idolatrous practices, Jeremiah 7:17-20. The Jewish sacrifices, if not accompanied with obedience to the moral law, are of no avail, Jeremiah 7:21-24.

Notwithstanding the numerous messages of Mercy from the time of the exodus, the people revolted more and more; and have added to their other sins this horrible evil, the setting up of their abominations in the Temple of JEHOVAH; or, in other words, they have encumbered the Mosaic economy, which shadowed forth the glorious truths of Christianity, with a heterogeneous admixture of the idolatrous, impure, and cruel rites of heathenism; consequently, the whole land shall be utterly desolated, Jeremiah 7:25-34.