Thank YOU JESUS For Dying For The Worst Sinner Like Me! 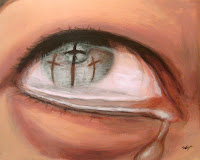 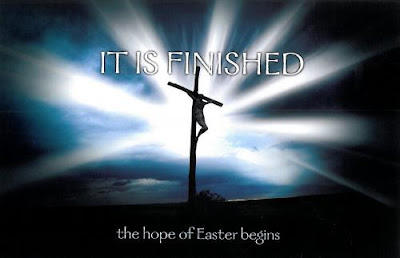 1Who has believed our message
and To whom Has The Arm of The LORD Been Revealed?

2HE Grew Up Before HIM like a tender shoot,
and like a root out of dry ground.

HE Had No Beauty or Majesty to attract us to HIM, nothing in HIS Appearance that we should desire HIM.

3HE Was Despised and Rejected by mankind,
a MAN of Suffering, and familiar with pain.

Like one from whom people hide their faces
HE Was Despised, and we held HIM in low esteem.

4Surely HE Took Up our pain
and Bore our suffering,

yet we considered HIM Punished By GOD,
Stricken by HIM, and Afflicted.

5But HE Was Pierced for our transgressions,
HE Was Crushed for our iniquities;

the punishment that brought us peace was on HIM, and by HIS Wounds we are healed.

6We all, like sheep, have gone astray,
each of us has turned to our own way;
and The LORD Has Laid On HIM
the iniquity of us all. 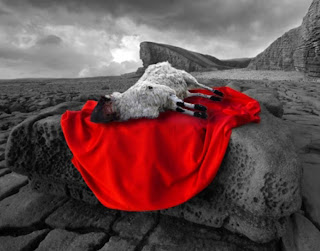 8By oppression and judgment HE Was Taken Away.

Yet who of HIS generation protested?
For HE Was Cut Off from the land of the living;
for the transgression of my people HE Was Punished.

9HE Was Assigned a grave with the wicked,
and with the rich in HIS Death,

though HE Had Done no violence,
nor was any deceit in HIS Mouth.

10Yet It Was The LORD'S Will To Crush HIM and Cause HIM To Suffer, and though The LORD Makes HIS Life an offering for sin,
HE Will See HIS offspring and prolong HIS Days,
and The Will of The LORD Will Prosper in HIS Hand.

11After HE Has Suffered,
HE Will See the light of life and be satisfied ;
by HIS Knowledge My Righteous Servant Will Justify many, and HE Will Bear their iniquities.

12Therefore I Will Give HIM a portion among the great, and HE Will Divide the spoils with the strong, because HE Poured Out HIS Life unto death, and Was Numbered with the transgressors. For HE Bore the sin of many, and Made intercession for the transgressors.

53:1-3 Nowhere in all the Old Testament is it so plainly and fully

prophesied that CHRIST Must Suffer, and then Enter into HIS

Glory, as in this chapter.


This prophecy also serves to be the basis for the explanation of the LORD JESUS to HIS disciples recorded in Luke 9:22;

“The SON of Man Must Suffer many things and Be Rejected by the elders, the chief priests and the teachers of the Law, and HE Must Be killed and on the third day Be Raised To life.”

But to this day few discern, or will acknowledge that Divine Power which goes with The WORD. The authentic and most important report of salvation for sinners through The SON of GOD is disregarded. The low condition HE Submitted to, and HIS Appearance in the world were not agreeable to the ideas the Jews had formed of The MESSIAH.

It was expected that HE Should Come in pomp; instead of that HE Grew Up as a plant, silently, and insensibly. HE Had nothing of the Glory which one might have thought to meet with HIM. HIS Whole Life was not only Humble as to outward condition, but also Sorrowful. Being Made sin for us, HE Underwent the sentence sin had exposed us to. Carnal hearts see nothing in The LORD JESUS to desire an interest in HIM. By how many Is HE still Despised in HIS Own people, the Jews and Rejected as to HIS Doctrine and Authority!

53:4-9 In these verses is an account of The Sufferings of CHRIST; also of the Design of HIS Sufferings. It was for our sins, and in our stead, that our LORD JESUS Suffered. We have all sinned, and have come short of the Glory of GOD. Sinners have their beloved sin, their own evil way, of which they are fond. Our sins deserve all griefs and sorrows, even the most severe. We are saved from the ruin, to which by sin we become liable, by laying our sins on CHRIST.

This atonement was to be made for our sins. And this is the only way of salvation. Our sins were the thorns in CHRIST's Head, the nails in HIS Hands and Feet, the spear in HIS Side. HE Was Delivered to death for our offences. By His Sufferings HE Purchased for us The SPIRIT and Grace of GOD, to mortify our corruptions, which are the distempers of our souls. We may well endure our lighter sufferings, if HE Has Taught us to esteem all things but loss for HIM, and to love HIM WHO Has First Loved us.

53:10-12 Come, and see how CHRIST Loved us! We could not put Him in our stead, but HE Put HIMSELF. Thus HE Took Away the sin of the world, by Taking it all on Himself. HE Made HIMSELF subject to death, which to us is the wages of sin. Observe the Graces and Glories of HIS state of exaltation. CHRIST Will Not Commit the care of HIS family to any other. GOD's Purposes Shall Take effect. And whatever is undertaken according to GOD’S Pleasure shall prosper.

HE Shall See it accomplished in the conversion and salvation of sinners. There are many whom CHRIST Justifies, even as many as HE Gave HIS life a ransom for. By faith we are justified; thus GOD Is Most Glorified, free grace most advanced, and our happiness secured. We must know HIM, and believe in HIM, as The ONE WHO Bore our sins, and Saved us from sinking under the load, by Taking it Upon HIMSELF.

Sin and Satan, death and hell, the world and the flesh, are the strong foes HE Has Vanquished. What GOD Designed for the REDEEMER HE Shall certainly Possess. When HE Led captivity captive, HE Received gifts for men, that HE Might Give gifts of The HOLY SPIRITt to men. While we survey The Sufferings of The SON of GOD, let us remember our long catalogue of transgressions, and consider Him as Suffering under the load of our guilt.

Here is laid a firm foundation for the trembling sinner to rest HIS soul upon. We are the Purchase of HIS Blood, and the monuments of HIS Grace; for this HE continually Pleads and Prevails, Destroying the works of the devil.


Thank YOU JESUS for dying for me!