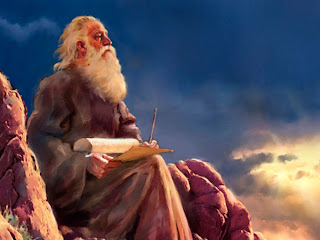 2“Go and proclaim in the hearing of

“ ‘I remember the devotion of your youth,
how as a bride you loved ME
and followed ME through the wilderness,
through a land not sown.

3Israel was holy to The LORD,
the firstfruits of HIS Harvest;
all who devoured her were held guilty,
and disaster overtook them,’ ”

4Hear The WORD of The LORD, you descendants of Jacob,
all you clans of Israel.

5This Is What The LORD Says:

“What fault did your ancestors find in ME,
that they strayed so far from ME?
They followed worthless idols
and became worthless themselves.

6They did not ask, ‘Where Is The LORD,
WHO Brought us Up out of Egypt
and Led us through the barren wilderness,
through a land of deserts and ravines,
a land of drought and utter darkness,
a land where no one travels and no one lives?’
7I Brought you into a fertile land
to eat its fruit and rich produce.
But you came and defiled MY Land
and made MY Inheritance detestable.
8The priests did not ask,
‘Where Is The LORD?’
Those who deal with the Law did not know ME;
the leaders rebelled against ME.
The prophets prophesied by Baal,
following worthless idols.
9“Therefore I Bring Charges Against you again,”

“And I Will Bring Charges Against your children’s children.
10Cross over to the coasts of Cyprus and look,
send to Kedara and observe closely;
see if there has ever been anything like this:
11Has a nation ever changed its gods?
(Yet they are not gods at all.)
But MY people Have Exchanged their Glorious GOD
for worthless idols.
12Be appalled at this, you heavens,
and shudder with great horror,”

13“MY people have committed two sins:

They have forsaken ME,

The Spring of Living Water,

and have dug their own cisterns, 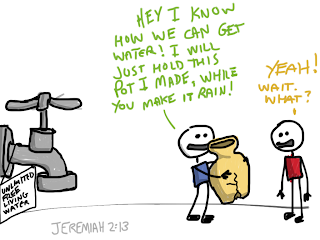 14Is Israel a servant, a slave by birth?
Why then has he become plunder?
15Lions have roared;
they have growled at him.
They have laid waste his land;
his towns are burned and deserted.
16Also, the men of Memphis and Tahpanhes
have cracked your skull.
17Have you not brought this on yourselves
by forsaking The LORD your GOD
When HE Led you in the way?
18Now why go to Egypt
to drink water from the Nileb ?
And why go to Assyria
to drink water from the Euphrates?
19Your wickedness will punish you;
your backsliding will rebuke you.
Consider then and realize
how evil and bitter it is for you
when you forsake The LORD your GOD
and have no awe of ME,”

Declares The LORD, The LORD ALMIGHTY.

20“Long ago you broke off your yoke
and tore off your bonds;
you said, ‘I will not serve YOU!’
Indeed, on every high hill
and under every spreading tree
you lay down as a prostitute.

21I had planted you like a choice vine
of sound and reliable stock.
How then did you turn against ME
into a corrupt, wild vine?

22 Although you wash yourself with soap

and use an abundance of cleansing powder,

the stain of your guilt is still before ME,” 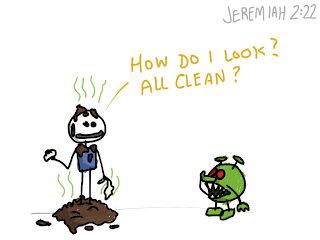 23“How can you say, ‘I am not defiled;
I have not run after the Baals’?
See how you behaved in the valley;
consider what you have done.
You are a swift she-camel
running here and there,
24a wild donkey accustomed to the desert,
sniffing the wind in her craving—
in her heat who can restrain her?
Any males that pursue her need not tire themselves;
at mating time they will find her.

25Do not run until your feet are bare
and your throat is dry.
But you said, ‘It’s no use!
I love foreign gods,
and I must go after them.’
26“As a thief is disgraced when he is caught,
so the people of Israel are disgraced—
they, their kings and their officials,
their priests and their prophets.
27They say to wood, ‘you are my father,’
and to stone, ‘you gave me birth.’
They have turned their backs to ME
and not their faces;
yet when they are in trouble, they say,
‘Come and Save us!’
28Where then are the gods you made for yourselves?
Let them come if they can save you
when you are in trouble!
For you, Judah, have as many gods
as you have towns.
29“Why do you bring charges against ME?
You have all rebelled against ME,”

30“In vain I punished your people;
they did not respond to correction.
Your sword has devoured your prophets
like a ravenous lion.

31“You of this generation, consider The WORD of The LORD:

“Have I been a desert to Israel
or a land of great darkness?
Why do MY people say, ‘We are free to roam;
we will come to YOU no more’?
32Does a young woman forget her jewelry,
a bride her wedding ornaments?
Yet MY people have forgotten ME,
days without number.
33How skilled you are at pursuing love!
Even the worst of women can learn from your ways.
34On your clothes is found
the lifeblood of the innocent poor,
though you did not catch them breaking in.
Yet in spite of all this
35you say, ‘I am innocent;
HE Is Not Angry With me.’
But I Will Pass Judgment On you
because you say, ‘I have not sinned.’
36Why do you go about so much,
changing your ways?
You will be disappointed by Egypt
as you were by Assyria.
37You will also leave that place
with your hands on your head,
for The LORD Has Rejected those you trust;
you will not be helped by them.

In the prophecies contained in Jeremiah 2-6, we have, probably, the records of Jeremiah's earlier ministies during the comparatively uneventful years of Josiah's reign. The great object of the prophet's mission was to urge upon the people the necessity of making use of that final opportunity of repentance then given them. If personal amendment followed upon the king's reforms Judah might yet be saved. We have then in these chapters such portions of Jeremiah's earlier teaching, published during Josiah's reign, as were deemed fit also for the Church's use in all time.

The prophecy Jeremiah 2:1-3:5 consists of three parts, of which the first Jeremiah 2:1-13 contains an appeal from GOD to all Israel, i. e., the whole twelve tribes, proving to them HIS Past Love, and that their desertion of HIM was without ground or reason.

In the second Jeremiah 2:14-28 the prophet shows that Israel's calamities were entirely the result of her apostasy.

In the last Jeremiah 2:29-3:5 we see Judah imitating Samaria's sin, and hardening itself against correction.