We Are The Bride Of CHRIST

The Future Glory of Zion

1“Sing, barren woman,
you who never bore a child;
burst into song, shout for joy,
you who were never in labor;
because more are the children of the desolate woman
than of her who has a husband,”

2“Enlarge the place of your tent,
stretch your tent curtains wide,
do not hold back;
lengthen your cords,
strengthen your stakes.

3For you will spread out to the right and to the left;
your descendants will dispossess nations
and settle in their desolate cities.
4“Do not be afraid; you will not be put to shame.
Do not fear disgrace; you will not be humiliated.
You will forget the shame of your youth
and remember no more the reproach of your widowhood.

5 For your Maker is your Husband—

The LORD ALMIGHTY Is HIS Name— 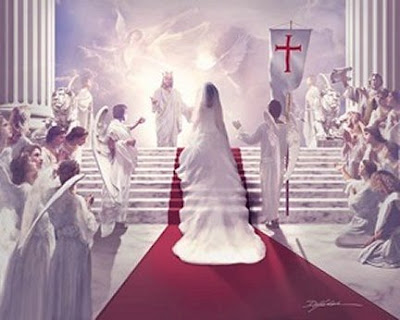 The HOLY ONE of Israel is your REDEEMER;
HE Is Called The GOD of all the earth.

6The LORD Will Call you Back
as if you were a wife deserted and distressed in spirit—
a wife who married young,
only to be rejected,”

7“For a brief moment I Abandoned you,
but with Deep Compassion I Will Bring you Back.
8In a Surge of Anger
I Hid MY Face from you for a moment,
but with Everlasting Kindness
I Will Have Compassion On you,”
Says The LORD your REDEEMER.
9“To ME this is like the days of Noah,
when I Swore that the waters of Noah would never again cover the earth.
So now I Have Sworn Not To Be Angry With you,
Never To Rebuke you again.
10Though the mountains be shaken
and the hills be removed,
yet MY Unfailing Love for you Will Not Be Shaken
nor MY Covenant of Peace Be Removed,”
Says The LORD, WHO Has Compassion On you.

11“Afflicted city, lashed by storms and not comforted,
I Will Rebuild you with stones of turquoise,a
your foundations with lapis lazuli.
12I Will Make your battlements of rubies,
your gates of sparkling jewels,
and all your walls of precious stones.

13All your children will be taught by The LORD,
and great will be their peace.

14In righteousness you will be established:
Tyranny will be far from you;
you will have nothing to fear.
Terror will be far removed;
it will not come near you.
15If anyone does attack you, it will not be MY Doing;
whoever attacks you will surrender to you.
16“See, It Is I WHO Created the blacksmith
who fans the coals into flame
and forges a weapon fit for its work.
And It Is I WHO Have Created the destroyer to wreak havoc;
17no weapon forged against you will prevail,
and you will refute every tongue that accuses you.
This is the heritage of the servants of The LORD,
and this is their vindication from ME,”

This chapter, probably closely connected in sense with the preceding, and growing out of the great truths there revealed respecting the Work of The MESSIAH, contains a promise of the enlargement, the moral renovation, and the future Glory of the KINGDOM of GOD, especially under The MESSIAH.

Like the preceding and succeeding chapters, it may have been primarily designed to give consolation to the exiles in Babylon, but it was consolation to be derived from what would occur in distant times under The MESSIAH, and in the spread of the true religion. Few and feeble as they were then; oppressed and captive; despised and apparently forsaken, they were permitted to look forward to future days, and had the assurance of a vast increase from the Gentile world, and of permanent glory.

The design of the whole chapter is consolatory, and is a promise of what would certainly result from the purpose of sending The MESSIAH to die for the world.

The chapter may be regarded as divided into the following portions:

I. An address to the people of GOD, or to Jerusalem, regarded as then feeble, and promising great enlargement Isaiah 54:1-6.

1. Promise of a great increase, under a two-fold image; first, Of a woman who had been barren, and who subsequently had many children Isaiah 54:1; and, secondly, Of a tent that was to be enlarged, in order to accommodate those who were to dwell in it Isaiah 54:2-3.

2. The foundation of this promise or assurance, that YAHWEH Was the Husband and Protector of HIS people Isaiah 54:4-6.

II. The Covenant which Yahweh had made with HIS people was firm and immovable Isaiah 54:7, Isaiah 54:10.

1. HE Had indeed Forsaken them for a little while, but it was only to gather them again with eternal and unchanging Favor Isaiah 54:7-8.

2. His Covenant with them would be as arm as that which HE Had Made with Noah, and which HE Had so steadily Observed Isaiah 54:9.

3. It would be even more firm than the hills Isaiah 54:10. They would depart, and the mountains would be removed; but HIS Covenant with HIS people Would Be Unshaken and Eternal.

III. A direct address to HIS people, as if agitated and tossed on a heaving sea, promising future stability and glory Isaiah 54:11-14.

1. They were then like a ship on the stormy ocean, and without comfort.

2. Yet there would be a firm foundation laid. These agitations would cease, and she would have stability.

3. The future condition of His people would be glorious. His church would rise on the foundation - the foundation of sapphires - like a splendid palace made of precious stones Isaiah 54:11-12.

4. All her children would be taught of YAHWEH, and their peace and prosperity be great Isaiah 54:13.

IV. She would be safe from all her foes. No weapon that should be formed against her would prosper. All they who made any attack on her were under HIS Control, and GOD Would Defend her from all their assaults Isaiah 54:15-17.