We Are Signs And Symbols From JESUS, Our LORD


Isaiah and His Children as Signs

1The LORD Said to me, “Take a large scroll and write on it with an ordinary pen: Maher-Shalal-Hash-Baz.”a 2So I called in Uriah the priest and Zechariah son of Jeberekiah as reliable witnesses for me. 3Then I made love to the prophetess, and she conceived and gave birth to a son. And The LORD said to me, “Name him Maher-Shalal-Hash-Baz. 4For before the boy knows how to say ‘My father’ or ‘My mother,’ the wealth of Damascus and the plunder of Samaria will be carried off by the king of Assyria.”

5The LORD Spoke to me again:

6“Because this people has rejected
the gently flowing waters of Shiloah
and rejoices over Rezin
and the son of Remaliah,

7Therefore The LORD Is about to Bring against them
the mighty floodwaters of the Euphrates—
the king of Assyria with all his pomp.
It will overflow all its channels,
run over all its banks

8and sweep on into Judah, swirling over it,
passing through it and reaching up to the neck.
Its outspread wings will cover the breadth of your land,

For GOD Is with us.

11This is what The LORD Says to me with HIS strong Hand upon me, Warning me not to follow the way of this people:

12“Do not call conspiracy
everything this people calls a conspiracy;
do not fear what they fear,
and do not dread it.

14HE Will Be a Holy Place;
for both Israel and Judah HE Will Be
a STONE that causes people to stumble
and a ROCK that makes them fall.
And for the people of Jerusalem HE Will Be
a Trap and a Snare.

15Many of them will stumble;
they will fall and be broken,
they will be snared and captured.”

16Bind up this testimony of warning
and seal up GOD’S Instruction among my disciples.

17I will wait for The LORD,
WHO Is Hiding HIS Face from the descendants of Jacob.
I will put my trust in HIM.

18 Here am I, and the children The LORD Has Given me. We are signs and symbols in Israel from The LORD ALMIGHTY, WHO Dwells on Mount Zion. 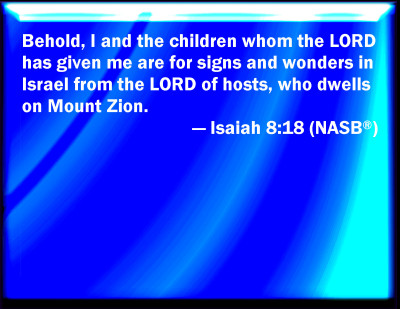 The Darkness Turns to Light

19When someone tells you to consult mediums and spiritists, who whisper and mutter, should not a people inquire of their GOD? Why consult the dead on behalf of the living?

20Consult GOD’S Instruction and the Testimony of warning. If anyone does not speak according to this WORD, they have no light of dawn. 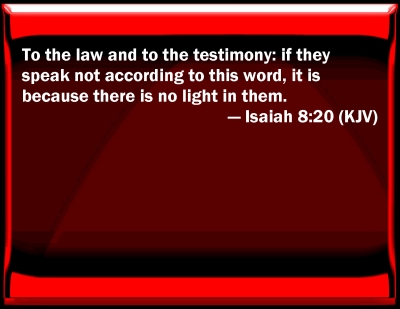 21Distressed and hungry, they will roam through the land; when they are famished, they will become enraged and, looking upward, will curse their KING and their GOD. 22Then they will look toward the earth and see only distress and darkness and fearful gloom, and they will be thrust into utter darkness.

In Isaiah 7 the prophet had told Ahaz that GOD Would Give him a sign that the land of Judah should be safe from the threatened invasion of the united armies of Syria and Israel.

In this chapter Isaiah 8, there is a record of the primary fulfillment of that promise, Isaiah 8:1-4. From Isaiah 8:5 to Isaiah 8:8, the prophet resumes and repeats what he had said before in Isaiah 7:17-25, that although the land should be safe from this invasion, yet one more formidable would occur by the armies of Assyria. The cause of this is stated to be, that Judah had despised The LORD, and had sought alliances with Syria and Israel.

The prophet then proceeds to exhort the people to put confidence in JEHOVAH - assuring them that if they refused to confide in HIM, they must expect to be destroyed, Isaiah 8:9-18; and the chapter concludes with denouncing punishment on those who looked to necromancers and diviners, rather than to The True GOD.

The prophecy is intimately connected with that in the previous chapter; and was delivered, evidently, not far from the same time.