Be Prepared For The Day Of The LORD!

1The WORD of The LORD That Came To Joel son of Pethuel.

An Invasion of Locusts 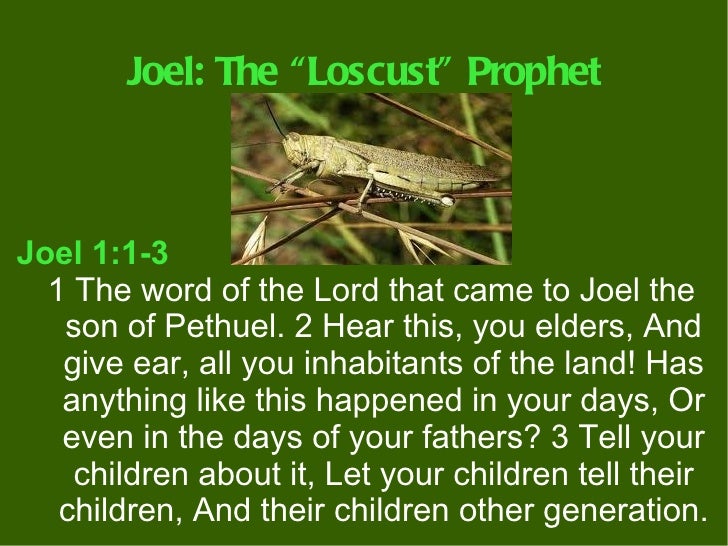 5Wake up, you drunkards, and weep!
Wail, all you drinkers of wine;
wail because of the new wine,
for it has been snatched from your lips.
6A nation has invaded my land,
a mighty army without number;
it has the teeth of a lion,
the fangs of a lioness.
7It has laid waste my vines
and ruined my fig trees.
It has stripped off their bark
and thrown it away,
leaving their branches white.
8Mourn like a virgin in sackcloth
grieving for the betrothed of her youth.
9Grain offerings and drink offerings
are cut off from The House of The Lord.
The priests are in mourning,
those who minister before The LORD. 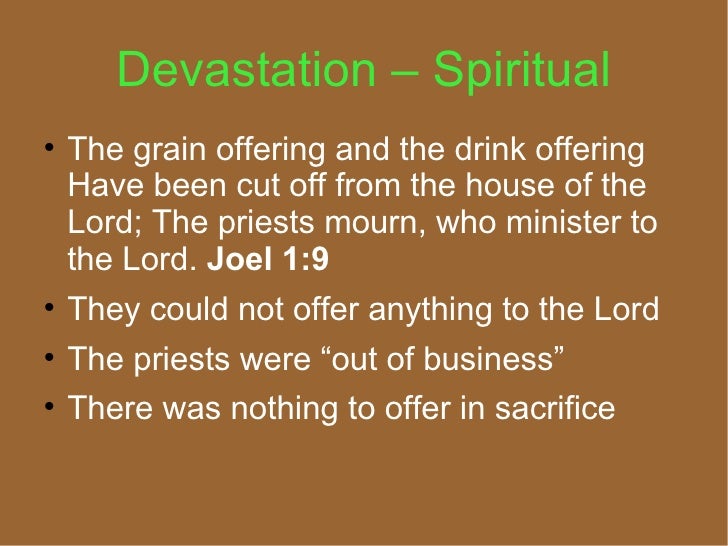 10The fields are ruined,
the ground is dried up;
the grain is destroyed,
the new wine is dried up,
the olive oil fails.
11Despair, you farmers,
wail, you vine growers;
grieve for the wheat and the barley,
because the harvest of the field is destroyed.
12The vine is dried up
and the fig tree is withered;
the pomegranate, the palm and the appleb tree—
all the trees of the field—are dried up.
Surely the people’s joy
is withered away.


A Call to Lamentation

13Put on sackcloth, you priests, and mourn;
wail, you who minister before the altar.
Come, spend the night in sackcloth,
you who minister before my GOD;
for the grain offerings and drink offerings
are withheld from The House of your GOD.
14Declare a holy fast;
call a sacred assembly.
Summon the elders
and all who live in the land
to The House of The Lord your GOD,
and cry out to The LORD.


For The Day of The LORD is near; 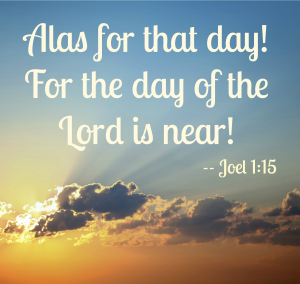 16Has not the food been cut off
before our very eyes—
joy and gladness
from The House of our GOD?
17The seeds are shriveled
beneath the clods.d
The storehouses are in ruins,
the granaries have been broken down,
for the grain has dried up.
18How the cattle moan!
The herds mill about
because they have no pasture;
even the flocks of sheep are suffering.
19To you, LORD, I call,
for fire has devoured the pastures in the wilderness
and flames have burned up all the trees of the field.
20Even the wild animals pant for YOU;
the streams of water have dried up
and fire has devoured the pastures in the wilderness.


The Book of Joel

In some Hebrew Bibles this prophecy is called "Sepher Joel", the Book of Joel and so the Apostle Peter quotes him, Acts 2:16.

In what age he lived is not easy to say. Some think he prophesied about the same time Hosea did, after whom he is next placed about eight hundred years Before CHRIST. And it seems indeed as if he prophesied after the ten tribes were carried captive, which was in the sixth year of Hezekiah's reign, since no mention is made of Israel but with respect to future times, only of Judah and Jerusalem.

But, be it when it will that he prophesied, there is no doubt to be made of the authenticity of this book, which is confirmed by the quotations of two apostles out of two: Peter and Paul, Acts 2:16.

This chapter describes a dreadful calamity upon the people of the Jews, by locusts and, caterpillars, and drought. After the title of the book, Joel 1:1; old men are called upon to observe this sore Judgment to their children, that it might be transmitted to the latest posterity, as the things that had not been seen and heard of, Joel 1:2; and drunkards to awake and weep, because the vines were destroyed, and no wine could be made for them, Joel 1:5; and not only vinedressers, but the priests of The LORD, are called to mourn, because such destruction, was made in the fields and vineyards, that there were no meat nor drink offering brought into The House of The LORD, Joel 1:8.

Therefore a general and solemn fast is required throughout the land, because of the distress of man and beast, Joel 1:14; and the chapter is concluded with the resolution of the prophet to cry to The LORD, on account of this calamity, Joel 1:19.