The One Who Sins Will Die


2“What do you people mean by quoting this proverb about the land of Israel:

“ ‘The parents eat sour grapes,
and the children’s teeth are set on edge’?


you will no longer quote this proverb in Israel. 4For everyone belongs to ME, the parent as well as the child—both alike belong to ME. The one who sins is the one who will die.

5“Suppose there is a righteous man
who does what is just and right.
6He does not eat at the mountain shrines
or look to the idols of Israel.
He does not defile his neighbor’s wife
or have sexual relations with a woman during her period.
7He does not oppress anyone,
but returns what he took in pledge for a loan.
He does not commit robbery
but gives his food to the hungry
and provides clothing for the naked.
8He does not lend to them at interest
or take a profit from them.
He withholds his hand from doing wrong
and judges fairly between two parties.
9He follows MY Decrees
and faithfully keeps MY Laws.
That man is righteous;
he will surely live,

10“Suppose he has a violent son, who sheds blood or does any of these other things 11(though the father has done none of them):

“He eats at the mountain shrines.
He defiles his neighbor’s wife.
12He oppresses the poor and needy.
He commits robbery.
He does not return what he took in pledge.
He looks to the idols.
He does detestable things.
13He lends at interest and takes a profit.

Will such a man live? He will not! Because he has done all these detestable things, he is to be put to death; his blood will be on his own head.

14“But suppose this son has a son who sees all the sins his father commits, and though he sees them, he does not do such things:

15“He does not eat at the mountain shrines
or look to the idols of Israel.
He does not defile his neighbor’s wife.
16He does not oppress anyone
or require a pledge for a loan.
He does not commit robbery
but gives his food to the hungry
and provides clothing for the naked.
17He withholds his hand from mistreating the poor
and takes no interest or profit from them.
He keeps MY Laws and follows MY Decrees.

He will not die for his father’s sin; he will surely live. 18But his father will die for his own sin, because he practiced extortion, robbed his brother and did what was wrong among his people.

19“Yet you ask, ‘Why does the son not share the guilt of his father?’ Since the son has done what is just and right and has been careful to keep all MY Decrees, he will surely live.

23 Do I Take any pleasure in the death of

Rather, AM I Not Pleased when

they turn from their ways and live?

24“But if a righteous person turns from their righteousness and commits sin and does the same detestable things the wicked person does, will they live? None of the righteous things that person has done will be remembered. Because of the unfaithfulness they are guilty of and because of the sins they have committed, they will die. 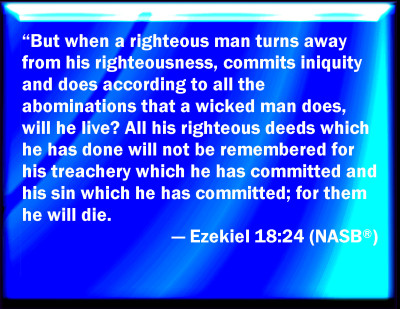 30“Therefore, you Israelites, I Will Judge each of you according to your own ways,

Turn away from all your offenses; then sin will not be your downfall.

31Rid yourselves of all the offenses you have committed, and get a new heart and a new spirit.

Why will you die, people of Israel?

32 For I Take no pleasure in the death of anyone, 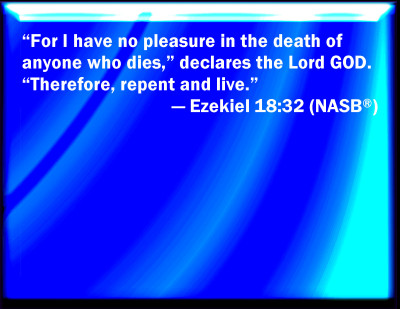 
Chapter 18 contains an important principle of the Dealings of GOD, unfolded at that period. GOD Would Judge the individual according to his own conduct; the wicked nation was judged as such. Neither was it, in fact, judged for the iniquity of the fathers. The present iniquities of the people made the Judgment which their fathers had merited suitable to their own actions.

But now, with respect to HIS Land of Israel, the principle of government laid down in Exodus 34:7 was set aside, and souls belonging, as they did individually, to JEHOVAH, would individually bear the Judgment of their own sins. GOD Would Pardon the repenting sinner. For HE Has No Pleasure in the sinner's death. The government of Israel on earth is still the subject. Every one shall be judged according to his ways.


It is important to remark that it is temporal Judgment in death which is spoken of here.


The question treated of is the allegation of Israel that they, according to the principle laid down in Exodus, were suffering for their fathers' sins. The prophet declares that this principle is not that on which GOD Will Act with them, that the soul or life of every one belonged to GOD, one as another, and that in Judgment HE Would Deal With each for his own sins, not the son for the father's; and then proceeds to lay down the principles on which HE Would Deal in Mercy and Judgment; but the Judgments are temporal Judgments, and the physical death in this world.

If the wicked turned from his ways, he would live and not die-not be cut off for the sins he repented of; so of the wicked, he shall surely die, his blood shall be upon him. So the soul that sins, he shall die. It is not the father, nor the son because of a father's sins; the person himself that sins shall die, each for his own. The emphasis is on "he."