Let All The Earth Keep Silence Before JEHOVAH

1I will stand at my watch
and station myself on the ramparts;
I will look to see What HE Will Say to me,
and what answer I am to give to this complaint.a 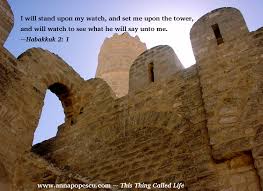 
2Then The LORD Replied:

“Write down the revelation

and make it plain on tablets

so that a herald may run with it.

3 For the revelation awaits an appointed

time; it speaks of the end

and will not prove false.

Though it linger, wait for it;

it will certainly come

and will not delay.

4“See, the enemy is puffed up;
his desires are not upright—
but the righteous person will live by his faithfulness —
5indeed, wine betrays him;
he is arrogant and never at rest.
Because he is as greedy as the grave
and like death is never satisfied,
he gathers to himself all the nations
and takes captive all the peoples.

6“Will not all of them taunt him with ridicule and scorn, saying,

“ ‘Woe to him who piles up stolen goods
and makes himself wealthy by extortion!
How long must this go on?’
7Will not your creditors suddenly arise?
Will they not wake up and make you tremble?
Then you will become their prey.
8Because you have plundered many nations,
the peoples who are left will plunder you.
For you have shed human blood;
you have destroyed lands and cities and everyone in them.
9“Woe to him who builds his house by unjust gain,
setting his nest on high
to escape the clutches of ruin!
10You have plotted the ruin of many peoples,
shaming your own house and forfeiting your life.
11The stones of the wall will cry out,
and the beams of the woodwork will echo it.
12“Woe to him who builds a city with bloodshed
and establishes a town by injustice!

13Has Not The LORD ALMIGHTY Determined
that the people’s labor is only fuel for the fire,
that the nations exhaust themselves for nothing?

14For the earth will be filled with the Knowledge of The Glory of The LORD as the waters cover the sea. 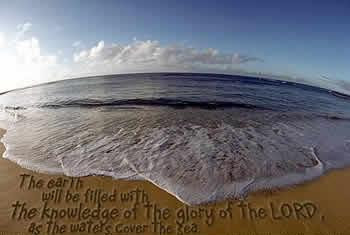 15“Woe to him who gives drink to his neighbors,
pouring it from the wineskin till they are drunk,
so that he can gaze on their naked bodies!
16You will be filled with shame instead of glory.
Now it is your turn! Drink and let your nakedness be exposed !
The cup from The LORD'S Right Hand Is Coming around to you,
and disgrace will cover your glory.
17The violence you have done to Lebanon will overwhelm you,
and your destruction of animals will terrify you.
For you have shed human blood;
you have destroyed lands and cities and everyone in them.
18“Of what value is an idol carved by a craftsman?
Or an image that teaches lies?
For the one who makes it trusts in his own creation;
he makes idols that cannot speak.
19Woe to him who says to wood, ‘Come to life!’
Or to lifeless stone, ‘Wake up!’
Can it give guidance?
It is covered with gold and silver;
there is no breath in it.”

20 The LORD is in HIS HOLY Temple;
let all the earth be silent before HIM.

The general idea of prophecy which is presented in these passages is that of one who is stationed on an elevated post of observation who can look over a large region of country, and give timely warning of the approach of an enemy, and is that of a scene which is made to pass before the mind like a picture, or a landscape, where the mind contemplates a panoramic view of objects around it, or in the distance; where, as in a landscape, objects may appear to be grouped together, or lying near together, which may be in fact separated a considerable distance.

The prophets described those objects which were presented to their minds as they "appeared" to them, or as they seem to be drawn on the picture which was before them. They had, undoubtedly, an intelligent consciousness of what they were describing; they had a clear view of the vision, and described it as it appeared to them.

Let this idea be kept in mind, that the prophets saw in vision; that probably the mode in which they contemplated objects was somewhat in the manner of a landscape as it passes before the mind, and much light and beauty will be cast on many of the prophecies which now seem to be obscure.