The Flying Scroll And The Woman In A Basket

1I looked again, and there before me was a flying scroll.


‘I Will Send it Out, and it will enter the house of the

thief and the house of anyone who swears falsely by

MY Name. It will remain in that house and destroy it

completely, both its timbers and its stones.’ ”

The Woman in a Basket


5Then the angel who was speaking to me came forward and said to me, “Look up and see what is appearing.”

He replied, “It is a basket.” And he added, “This is the iniquity of the people throughout the land.” 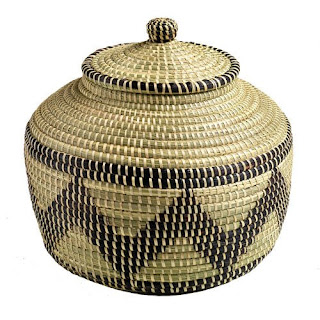 7Then the cover of lead was raised, and there in the basket sat a woman! 8He said, “This is wickedness,” and he pushed her back into the basket and pushed its lead cover down on it.

9Then I looked up—and there before me were two women, with the wind in their wings! They had wings like those of a stork, and they lifted up the basket between heaven and earth.

10“Where are they taking the basket?” I asked the angel who was speaking to me.

11He replied, “To the country of Babylonia to build a house for it. When the house is ready, the basket will be set there in its place.”

Thus far, all had been bright, full of the promise of the gifts of GOD; of GOD'S Favor to HIS people, the removal of their enemies, the restoration, the security of GOD'S people and Church under HIS Protection and the Promise of HIM, through whom there should be entire forgiveness and the abiding illumining of the Church by The SPIRIT of GOD.

Yet there is a reverse side to all this, GOD'S Judgments on those who reject all HIS mercies. Prophecies partly appertain to those in whose times the writers prophesied, partly to the mysteries of CHRIST. And therefore it is the custom of the prophets, at one time to chastise vices and set forth punishments, at another to predict the Mysteries of CHRIST and the Church.

And I turned and behold a roll flying - Ezekiel was shown "a hand with a roll of a book therein, and he spread it before me." Ezekiel's roll also was "written within and without, and there was written, therein lamentation and mourning and woe" Ezekiel 2:9-10. It was a wide unfolded roll, as is involved in its flying; but its flight signified the very swift coming of punishment and its flying from heaven signifies that the sentence came from the Judgment-Seat above.

5:1-4 The Scriptures of the Old and New Testament are rolls, in which GOD Has Written the great things of HIS Law and Gospel; they are flying rolls. GOD'S WORD Runs very swiftly, Psalm 147:15. This flying roll contains a declaration of the Righteous Wrath of GOD against sinners. Oh that we saw with an eye of faith the flying roll of GOD'S Curse hanging over the guilty world as a thick cloud, not only keeping off the sunbeams of GOD'S Favor, but big with thunders, lightning, and storms, ready to destroy them!

How welcome then would the Tidings of The SAVIOR'S be, WHO Came To Redeem us from the curse of the Law, Being HIMSELF Made a curse for us! Sin is the ruin of houses and families; especially the doing hurt to others. Who knows The Power of GOD'S Anger? GOD'S Curse cannot be kept out by bars or locks. All are transgressors of the Law, so we cannot escape this Wrath of GOD, except we flee for refuge to lay hold on the hope set before us in The Gospel of CHRIST.

5:5-11 In this vision the prophet sees an ephah, something in the shape of a corn measure. This represents the Jewish nation. They are filling the measure of their iniquity; and when it is full, they shall be delivered into the hands of those to whom GOD Sold them for their sins.

The woman sitting in the midst of the ephah represents the sinful church and nation of the Jews, in their latter and corrupt age. Guilt is upon the sinner as a weight of lead, to sink him to the lowest hell. This seems to mean the condemnation of the Jews, after they filled the measure of their iniquities by crucifying CHRIST and rejecting HIS Gospel.

Zechariah sees the ephah, with the woman thus pressed in it, carried away to some far country. This intimates that the Jews should be hurried out of their own land, and forced to dwell in far countries, as they had been in Babylon. There the ephah shall be firmly placed, and their sufferings shall continue far longer than in their late captivity. Blindness is happened to Israel, and they are settled upon their own unbelief.

Let sinners fear to treasure up wrath against the Day of GOD’S Judgment; for the more they multiply crimes, the faster the measure fills.