There Will Come A Famine For The WORD Of JEHOVAH !


A Basket of Ripe Fruit

1This Is What The SOVEREIGN LORD Showed me: a basket of ripe fruit.

“A basket of ripe fruit,” I answered.

Then The LORD Said To me,

“The time is ripe for MY people Israel; I

Will Spare them no longer. 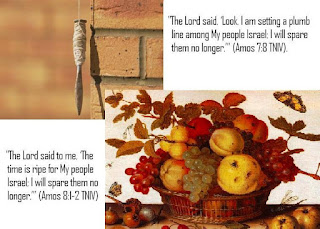 “the songs in The Temple will turn to wailing. Many,
many bodies—flung everywhere!

4Hear this, you who trample the needy
and do away with the poor of the land,

“When will the New Moon be over
that we may sell grain,
and the Sabbath be ended
that we may market wheat?”—
skimping on the measure,
boosting the price
and cheating with dishonest scales,
6buying the poor with silver
and the needy for a pair of sandals,
selling even the sweepings with the wheat.

7The LORD Has Sworn by HIMSELF, the Pride of

“I Will Never Forget anything they have done.

8“Will not the land tremble for this,
and all who live in it mourn?
The whole land will rise like the Nile;
it will be stirred up and then sink
like the river of Egypt.

9“In that day,” Declares The SOVEREIGN LORD,

“I Will Make the sun go down at noon
and darken the earth in broad daylight.
10I Will Turn your religious festivals into mourning
and all your singing into weeping.
I Will Make all of you wear sackcloth
and shave your heads.
I Will Make that time like mourning for an only son
and the end of it like a bitter day.

“When I Will Send a famine through the land—

not a famine of food or a thirst for water,

but a famine of hearing The WORDS of The LORD.

12 People will stagger from sea to sea

and wander from north to east,

searching for The WORD of The LORD,

but they will not find it.

will faint because of thirst. 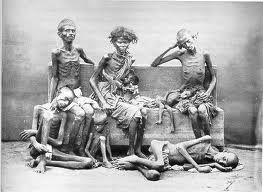 14Those who swear by the sin of Samaria—
who say, ‘As surely as your god lives, Dan,’
or, ‘As surely as the god of Beersheba lives’—
they will fall, never to rise again.”


8:1-3 Amos saw a basket of summer fruit gathered, and ready to be eaten; which signified, that the people were ripe for destruction that the Year of GOD'S Patience Was Drawing towards a conclusion.

Such summer fruits will not keep until winter, but must be used at once. Sinners put off repentance from day to day, because they think The LORD Delays HIS Judgments.

8:4-14 The rich and powerful of the land were the most guilty of oppression, as well as the foremost in idolatry. They were weary of the restraints of the Sabbaths and the New Moons, and wished them over, because no common work might be done therein.

But can we spend our time better than in communion with GOD? When employed in religious services, they were thinking of marketing. They were weary of holy duties, because their worldly business stood still the while. Those are strangers to GOD, and enemies to themselves, who love market days better than Sabbath Days, who would rather be selling corn than worshiping GOD.

They have no regard to man: those who have lost the savor of piety will not long keep the sense of common honesty. They cheat those they deal with. They take advantage of their neighbor's ignorance or necessity. He who despises the poor, reproaches his Maker. Riches that are gained by the ruin of the poor will bring ruin on those who get them.

GOD Will Remember their sin against them. Thus there shall be terror and desolation everywhere. It shall come upon them when they little think of it. What will be the weeping in the bitter day which follows sinful and sensual pleasures?