JESUS Is LORD Of The Sabbath


JESUS Is LORD of the Sabbath


1One Sabbath JESUS Was Going through the grainfields, and HIS disciples began to pick some heads of grain, rub them in their hands and eat the kernels. 2Some of the Pharisees asked, “Why are you doing what is unlawful on the Sabbath?”


“Have you never read what David did when he and his companions were hungry? 4He entered The House of GOD, and taking the consecrated bread, he ate what is lawful only for priests to eat. And he also gave some to his companions.”

5Then JESUS Said to them,

“The SON of Man Is LORD of the

6On another Sabbath HE Went Into the synagogue and Was Teaching, and a man was there whose right hand was shriveled. 7The Pharisees and the teachers of the Law were looking for a reason to accuse JESUS, so they watched HIM closely to see If HE Would Heal on the Sabbath. 8But JESUS Knew what they were thinking and Said to the man with the shriveled hand,


“Get up and Stand in front of everyone.”

So he got up and stood there.

9Then JESUS Said to them,

“I ask you, which is lawful on the

Sabbath: to do good or to do evil, to

save life or to destroy it?” 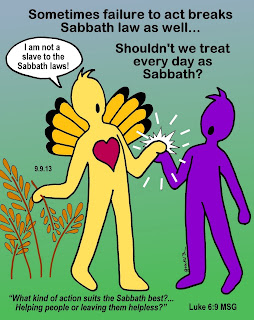 10HE Looked Around at them all,

and then Said to the man,


“Stretch out your hand.”


He did so, and his hand was completely restored. 11But the Pharisees and the teachers of the Law were furious and began to discuss with one another what they might do to JESUS.

12One of those days JESUS Went Out to a mountainside to Pray, and Spent the night Praying to GOD.13When morning came, HE Called HIS disciples to HIM and Chose twelve of them, whom HE also Designated apostles: 14Simon (whom HE Named Peter), his brother Andrew, James, John, Philip, Bartholomew,15Matthew, Thomas, James son of Alphaeus, Simon who was called the Zealot, 16Judas son of James, and Judas Iscariot, who became a traitor.

17HE Went Down with them and Stood on a level place. A large crowd of HIS disciples was there and a great number of people from all over Judea, from Jerusalem, and from the coastal region around Tyre and Sidon, 18who had come to hear HIM and to be healed of their diseases. Those troubled by impure spirits were cured, 19and the people all tried to touch HIM, because Power Was Coming from HIM and Healing them all.

20Looking at HIS disciples,

“Blessed are you who are poor,

for yours is The KINGDOM of GOD.

21Blessed are you who hunger now,

for you will be satisfied.

Blessed are you who weep now,

for you will laugh. 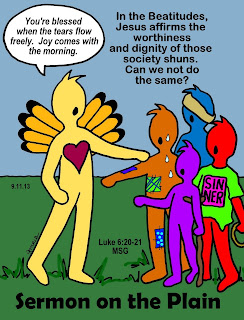 22Blessed are you when people hate you,

when they exclude you and insult you

and reject your name as evil,

Because of The SON of Man.

23“Rejoice in that day and leap for joy, because great is your reward in Heaven.

For that is how their ancestors treated the prophets.

24“But woe to you who are rich,
for you have already received your comfort.

27“But to you who are listening I Say:

Love your enemies, do good to those who hate you,

28Bless those who curse you,

Pray for those who mistreat you.

29If someone slaps you on one cheek, turn to them the other also. If someone takes your coat, do not withhold your shirt from them. 30Give to everyone who asks you, and if anyone takes what belongs to you, do not demand it back.


31 Do to others as you would have them do 33And if you do good to those who are good to you, what credit is that to you? Even sinners do that.

34And if you lend to those from whom you expect repayment, what credit is that to you? Even sinners lend to sinners, expecting to be repaid in full.

35But love your enemies, do good to them, and lend to them without expecting to get anything back. Then your reward will be great, and you will be children of The MOST HIGH, Because HE Is Kind to the ungrateful and wicked.

36Be merciful, just as your FATHER Is Merciful.

38 Give, and it will be given to you. A good measure, pressed down, shaken together and running over, will be poured into your lap. For with the measure you use, it will be measured to you.” 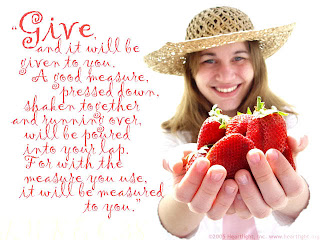 39HE also Told them this parable:


“Can the blind lead the blind? Will they not both fall into a pit? 40The student is not above the teacher, but everyone who is fully trained will be like their teacher.

A Tree and Its Fruit

43“No good tree bears bad fruit, nor does a bad tree bear good fruit. 44Each tree is recognized by its own fruit. People do not pick figs from thornbushes, or grapes from briers. 45A good man brings good things out of the good stored up in his heart, and an evil man brings evil things out of the evil stored up in his heart. For the mouth speaks what the heart is full of.

The Wise and Foolish Builders

and do not do what I say?

47As for everyone who comes to ME and hears MY WORDS and puts them into practice, I Will Show you what they are like. 48They are like a man building a house, who dug down deep and laid the foundation on rock. When a flood came, the torrent struck that house but could not shake it, because it was well built.

49But the one who hears MY WORDS and does not put them into practice is like a man who built a house on the ground without a foundation. 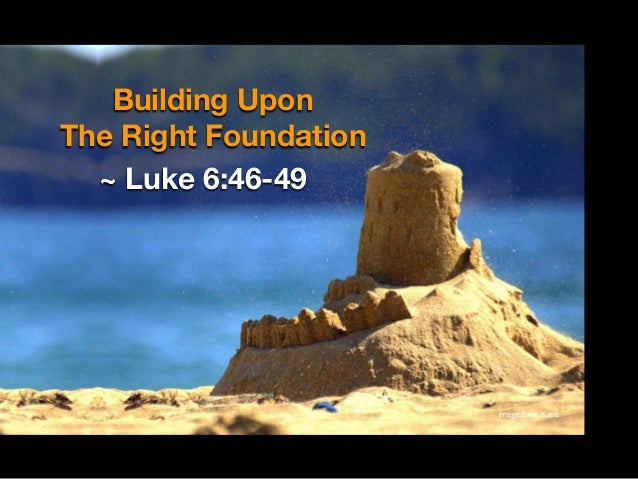 The moment the torrent struck that house, it collapsed and its destruction was complete.” 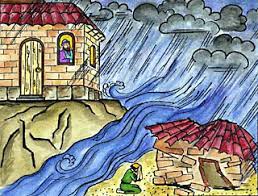 LORD of the Sabbath

The phrase “The LORD of the Sabbath” is found in Matthew 12:8, Mark 2:28, and Luke 6:5. In all three instances JESUS Is Referring to Himself as The Lord of the Sabbath or as Mark records it: “The SON of Man is LORD even of the Sabbath” (Mark 2:28). In these verses, JESUS Is Proclaiming that HE Is The ONE WHO Exercises Authority even over the rules and regulations that govern the Sabbath Day.


As such, JESUS Was Proclaiming to the world, especially to the legalistic Pharisees, that HE Was Greater than the Law and above the Laws of the Mosaic Covenant Because, As GOD In Flesh, HE Is The Author of those Laws. Unable to keep the Law, however, the Pharisees had instituted a complex and confusing system of Sabbath Laws of their own which were oppressive and legalistic. They had set up strict laws regarding how to observe the Sabbath which included thirty-nine categories of forbidden activities. In essence, these religious leaders had made themselves lords of the Sabbath, thus making themselves lords over the people.


As LORD of the Sabbath, JESUS Had The Right, Power and Authority To Dispense it in any way HE Pleased, even to the abolishing of it and reinstituting it as The LORD'S Day, a day of worship. Since The LORD of the Sabbath Had Come, HE WHO Is The Only True “Sabbath Rest” made the old Law of the Sabbath no longer needed or binding.

When HE Said “The Sabbath was made for man, not man for the Sabbath” (Mark 2:27), JESUS Was Attesting to the fact that just as the Sabbath day was originally instituted to give man rest from his labors, So Did HE Come To Provide us rest from laboring to achieve our own salvation by our works.


Because of HIS Sacrifice on the cross, we can now forever cease laboring to attain GOD’S Favor and Rest in HIS Mercy and Grace.