18As JESUS Was Walking beside the Sea of Galilee, HE Saw two brothers, Simon called Peter and his brother Andrew. They were casting a net into the lake, for they were fishermen. 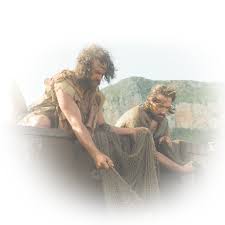 
“And I Will Send you out to fish for people.” 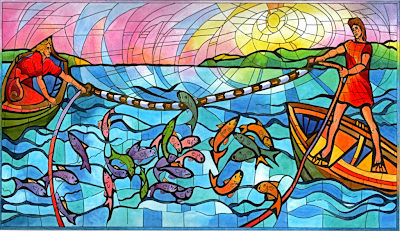 20 At once they left their nets and followed HIM.

21Going on from there, HE Saw two other brothers, James son of Zebedee and his brother John. They were in a boat with their father Zebedee, preparing their nets. JESUS called them,

22 and immediately they left the boat and their father and followed HIM.

Who are the 12 Disciples of JESUS CHRIST?

And when day came, HE Called HIS disciples and Chose from them twelve, whom HE Named apostles: Simon, whom HE Named Peter, and Andrew his brother, and James and John, and Philip, and Bartholomew, and Matthew, and Thomas, and James the son of Alphaeus, and Simon who was called the Zealot, and Judas the son of James, and Judas Iscariot, who became a traitor. (ESV)

JESUS CHRIST Selected 12 men from among HIS early followers to become HIS closest disciples. After an intensive discipleship course and following HIS Resurrection from the dead, The LORD fully Commissioned the apostles (Matthew 28:16-2, Mark 16:15) to advance GOD'S KINGDOM and carry The Gospel message to the world.

These men became the pioneering leaders of the New Testament church, but they were not without faults and shortcomings. Interestingly, not one of the chosen 12 disciples was a scholar or rabbi. They had no extraordinary skills. Neither religious, nor refined, they were ordinary people, just like you and me. But GOD Chose them for a purpose—to fan the flames of the Gospel that would spread across the face of the earth and continue to burn down through the centuries. HE Selected and Used each of these regular guys to carry out HIS Exceptional Plan.

Take a few moments now to learn a lesson or two from the 12 apostles—men who helped ignite the light of truth that still dwells within our hearts today and calls us to come and follow JESUS CHRIST.

Without question, the Apostle Peter was a "duh"-ciple most of us can identify with. One minute he was walking on water by faith, and the next he was sinking in doubts. Impulsive and emotional, Peter is best known for denying JESUS when the pressure was on. Even so, as a disciple he was dearly loved by CHRIST, holding a special place among the twelve.
Peter, often a spokesman for the twelve, stands out in the Gospels. Whenever the men are listed, Peter's name is first. He, James, and John formed the inner circle of JESUS' closest companions. These three alone were given the unique privilege of experiencing the transfiguration, along with a few other extraordinary revelations of JESUS.

After the Resurrection of CHRIST, Peter became a bold evangelist and missionary, and one of the greatest leaders of the early church. Passionate until the end, historians record that when Peter was sentenced to death by crucifixion, he requested that his head be turned toward the ground because he did not feel worthy to die in the same manner as his SAVIOR. Discover why the life of Peter conveys great hope for us today.

The Apostle Andrew abandoned John the Baptist to become the first follower of JESUS of Nazareth, but John didn't mind. He knew his mission was to point people to The MESSIAH.
Like many of us, Andrew lived in the shadow of his more famous sibling, Simon Peter. Andrew led Peter to CHRIST, then stepped into the background as his boisterous brother became a leader among the apostles and in the early church.
The Gospels don't tell us a great deal about Andrew, but we can read between the lines and find a person who thirsted for truth and found it in the living water of JESUS CHRIST. Discover how a simple fisherman dropped his nets on the shore and went on to become a remarkable fisher of men.

James the son of Zebedee, often called James the Greater to distinguish him from the other apostle named James, was a member of JESUS CHRIST'S inner circle, which included his brother, the Apostle John, and Peter. Not only did James and John earn a special nickname from The LORD—"sons of thunder"—they were privileged to be at the front and center of three supernatural events in the life of CHRIST.

In addition to these honors, James was the first of the twelve to be martyred for his faith in A.D. 44.

The Apostle John, brother to James, was nicknamed by JESUS one of the "sons of thunder," but he liked to call himself  "the disciple whom JESUS Loved." With his fiery temperament and special devotion to The SAVIOR, he gained a favored place in CHRIST'S inner circle.

John's enormous impact on the early Christian church and his larger-than-life personality, make him a fascinating character study. His writings reveal contrasting traits. For instance, on the first Easter morning, with his typical zeal and enthusiasm, John raced Peter to the tomb after Mary Magdalene reported that it was now empty. Although John won the race and bragged about this achievement in his Gospel (John 20:1-9), he humbly allowed Peter to enter the tomb first.

According to tradition, John outlived all of the disciples, dying of old age in Ephesus, where he preached a gospel of love and taught against heresy.

Philip was one of the first followers of JESUS CHRIST, and he wasted no time calling others, like Nathanael, to do the same. Although little is known about him after the Ascension of CHRIST, Bible historians believe Philip preached the gospel in Phrygia, in Asia Minor, and died a martyr there at Hierapolis. Learn how Philip’s search for the truth led him directly to The Promised MESSIAH.

Nathanael, believed to be the disciple Bartholomew, experienced a jarring first encounter with JESUS. When the Apostle Philip called him to come and meet The MESSIAH, Nathanael was skeptical, but he followed along anyway. As Philip introduced him to JESUS, The LORD Declared, "Here is a true Israelite, in whom there is nothing false." Immediately Nathanael wanted to know, "How Do You Know me?"

JESUS Got his attention when HE Answered, "I Saw you while you were still under the fig tree before Philip called you." Well, that stopped Nathanael in his tracks. Shocked and surprised he declared, "Rabbi, YOU Are The SON of GOD; YOU Are The KING of Israel."

Nathanael garnered only a few lines in the Gospels, nevertheless, in that instant he became a loyal follower of JESUS CHRIST.

Levi, who became the Apostle Matthew, was a customs official in Capernaum who taxed imports and exports based on his own judgment. The Jews hated him because he worked for Rome and betrayed his countrymen.

But when Matthew the dishonest tax collector heard two words from JESUS, "Follow ME," he left everything and obeyed. Like us, he longed to be accepted and loved. Matthew recognized JESUS as someone worth sacrificing for. Find out why, 2,000 years later, Matthew's eyewitness Gospel still sounds an irresistible call.

The Apostle Thomas is often referred to as "Doubting Thomas" because he refused to believe that JESUS Had Risen from the dead until he saw and touched CHRIST'S physical wounds. As far as disciples go, however, history has dealt Thomas a bum rap. After all, each of the 12 apostles, except John, abandoned JESUS during HIS Trial and Death at Calvary.

Thomas, like us, was prone to extremes. Earlier he had demonstrated courageous faith, willing to risk his own life to follow JESUS into Judea. There is an important lesson to be gained from studying Thomas: If we're truly seeking to know the truth, and we're honest with ourselves and others about our struggles and doubts, GOD Will faithfully Meet us and Reveal HIMSELF to us, Just As HE Did for Thomas.

James the Less is one of the most obscure apostles in the Bible. The only things we know for certain are his name and that he was present in the upper room of Jerusalem after CHRIST Ascended to heaven.
In Twelve Ordinary Men, John MacArthur suggests that his obscurity may have been the distinguishing mark of his life. Discover why James the Less' complete anonymity may reveal something profound about his character.

Who doesn't like a good mystery? Well, the Scriptures introduce us to quite a few riddles that scholars have yet to solve. One of those puzzling questions is the exact identity of Simon the Zealot, the Bible's own mystery apostle.

Scripture tells us almost nothing about Simon. In the Gospels, he is mentioned in three places, but only to list his name. In Acts 1:13 we learn that he was present with the apostles in the upper room of Jerusalem after CHRIST Had Ascended to heaven. Beyond those few details, we can only speculate about Simon and his designation as a Zealot.

Listed together with Simon the Zealot and James the Less, the Apostle Thaddeus completes a grouping of the least known disciples. In Twelve Ordinary Men, John MacArthur's book about the apostles, Thaddeus, also known as Jude, is characterized as a tender-hearted, gentle man who displayed childlike humility.

Scholars believe Thaddeus wrote the book of Jude. It's a short epistle, but the closing two verses contain a beautiful doxology, one of the finest expressions of praise to GOD in the entire New Testament.

Judas Iscariot is the apostle who betrayed his Master with a kiss. For this supreme act of treachery, some would say Judas Iscariot made the greatest error in history.


Down through time, people have had strong or mixed feelings about Judas. Some experience a sense of hatred toward him, others feel pity, and some have even considered him a hero. No matter how you react to him, one thing is certain, believers can benefit greatly by taking a serious look at his life.