1JESUS Stepped Into a boat, Crossed Over and Came to HIS Own town. 2Some men brought to HIM a paralyzed man, lying on a mat. When JESUS Saw their faith, HE Said to the man,

3At this, some of the teachers of the Law said to themselves, “This fellow is blaspheming!”

“Why do you entertain evil thoughts in your hearts? 5Which is easier: to say, ‘Your sins are forgiven,’ or to say, ‘Get up and walk’?

6 But I Want you to know that The SON of Man Has Authority on earth to forgive sins.”


7Then the man got up and went home. 8When the crowd saw this, they were filled with awe; and they praised GOD, WHO Had Given Such Authority to Man.

The Calling of Matthew

9AsJESUS went on from there, HE Saw a man named Matthew sitting at the tax collector’s booth.


HE Told him, and Matthew got up and followed HIM. 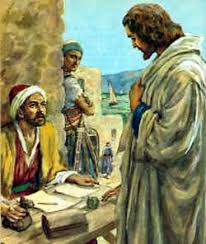 12On hearing this, JESUS Said,

“It is not the healthy who need a doctor, but the sick. 13 But go and learn what this means: ‘I Desire Mercy, not Sacrifice.’ For I Have Not Come to Call the righteous, but sinners.”

14Then John’s disciples came and asked HIM, “How is it that we and the Pharisees fast often, but your disciples do not fast?”


“How can the guests of the bridegroom mourn while he is with them? The time will come when the bridegroom will be taken from them; then they will fast.

16“No one sews a patch of unshrunk cloth on an old garment, for the patch will pull away from the garment, making the tear worse. 17Neither do people pour new wine into old wineskins. If they do, the skins will burst; the wine will run out and the wineskins will be ruined. No, they pour new wine into new wineskins, and both are preserved.”


JESUS Raises a Dead Girl and Heals a Sick Woman


18While HE Was Saying this, a synagogue leader came and knelt before HIM and said, “My daughter has just died. But come and put YOUR Hand on her, and she will live.” 19JESUS Got Up and Went with him, and so did HIS disciples.

20Just then a woman who had been subject to bleeding for twelve years came up behind HIM and touched the edge of HIS Cloak.

21She said to herself,

“If I only touch HIS Cloak, I will be healed.”

22JESUS Turned and Saw her.

“your faith has healed you.”


And the woman was healed at that moment.

23When JESUS entered the synagogue leader’s house and saw the noisy crowd and people playing pipes,

“Go away. The girl is not dead but asleep.”

But they laughed at HIM. 25After the crowd had been put outside, HE Went In and Took the girl by the hand, and she got up. 26News of this spread through all that region. 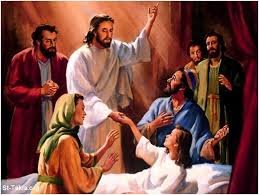 JESUS Heals the Blind and the Mute

27As JESUS Went On from there, two blind men followed HIM, calling out,

28When HE Had Gone indoors, the blind men came to HIM, and HE Asked them,


“Do you believe that I AM Able To Do 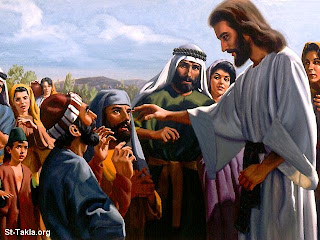 29Then HE Touched their eyes and Said,

“According to your faith let it be done to you”;

30and their sight was restored.

“See that no one knows about this.”

31But they went out and spread the news about HIM all over that region.

32While they were going out, a man who was demon-possessed and could not talk was brought to JESUS. 33And when the demon was driven out, the man who had been mute spoke. The crowd was amazed and said, “Nothing like this has ever been seen in Israel.”

34But the Pharisees said,

“It is by the prince of demons that HE Drives Out demons.”


The Workers Are Few

35JESUS Went Through all the towns and villages, Teaching in their synagogues, Proclaiming the good news of the kingdom and Healing every disease and sickness. 36When HE Saw the crowds, HE Had Compassion on them, because they were harassed and helpless, like sheep without a shepherd.

37Then HE Said to HIS disciples,

“The harvest is plentiful but the workers are few. 38Ask The LORD of The Harvest, therefore, To Send Out workers into HIS Harvest Field.” LORD of The Harvest


GOD Is The LORD of The Harvest;

It is the Vineyard of The LORD of Hosts, Isaiah 5:7.

It is for HIM and to HIM, and to HIS service and honor that the harvest is gathered in. You are GOD’S husbandry (1 Corinthians 3:9); HIS threshing, and the grain of HIS floor, Isaiah 21:10. HE Orders everything concerning the harvest as HE Pleases; when and where the laborers shall work, and how long; and it is very comfortable to those who wish well to the harvest work, that GOD HIMSELF Presides in it, WHO Will Be sure to order all for the best.

Ministers are and should be laborers in GOD’S harvest; the ministry is a work and must be attended to accordingly; it is harvest-work, which is needful work; work that requires everything to be done in its season, and diligence to do it thoroughly; but it is pleasant work; they reap in joy, and the joy of the preachers of the Gospel is likened to the joy of harvest (Isaiah 9:2, 3); and he that reaps receives wages; the hire of the laborers that reap down GOD’S field, shall not be kept back, as theirs was, James 5:4.

It is GOD’S Work to Send Forth laborers; CHRIST Makes ministers (Ephesians 4:11); the office is of HIS appointing, the qualifications of His working, the call of His giving. They will not be owned nor paid as laborers, that run without their errand, unqualified, uncalled. How shall they preach except they are sent?

All who love CHRIST and souls, should show it by their earnest prayers to GOD, especially when the harvest is plentiful, that HE Would Send Forth more skillful, faithful, wise, and industrious laborers into HIS harvest field; that HE Would Raise up such as HE Will Own in the conversion of sinners and the edification of saints; Would Give them a spirit for the work, Call them to it, and Succeed them in it; that HE Would Give them wisdom to win souls; that HE Would Thrust Forth laborers, so some; Intimating unwillingness to go forth, because of their own weakness and the people’s badness, and opposition from men, that endeavor to thrust them out of the harvest; but we should pray that all contradiction from inside and from outside, may be conquered and gotten over.

CHRIST Puts HIS friends upon praying this, just before HE Sends apostles forth to labor in the harvest. It is a good sign God Is About To Bestow some special Mercy upon a people, when HE Stirs Up those who have an interest at the Throne of Grace, to pray for it, Psalm 10:17. Further observe, that CHRIST Said this to HIS disciples, who were to be employed as laborers. They must pray, First, That GOD  Would Send them forth. Here am I, send me, Isaiah 6:8. Commissions, given in answer to prayer, are most likely to be successful; Paul is a chosen vessel, for he prays, Acts 9:11, 15.

Secondly, That HE Would Send others Forth. Not the people only, but those who are themselves ministers, should pray for the increase of ministers. Though self-interest makes those who seek their own things desirous to be placed alone (the fewer ministers the more popularity!), yet those who seek the Things of CHRIST, desire more workmen, that more work may be done, though they may be eclipsed by it.