1And HE Said to them,

“Truly I Tell you, some who are standing here will not taste death before they see that The KINGDOM of GOD Has Come With Power.”

2After six days JESUS Took Peter, James and John with HIM and Led them up a high mountain, where they were all alone. There HE Was Transfigured before them. 3HIS Clothes Became Dazzling White, whiter than anyone in the world could bleach them. 4And there appeared before them Elijah and Moses, who were talking with JESUS. 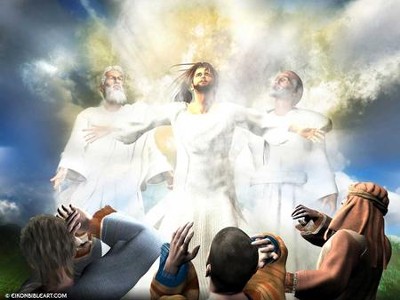 5Peter said to JESUS, “Rabbi, it is good for us to be here. Let us put up three shelters—one for you, one for Moses and one for Elijah.” 6(He did not know what to say, they were so frightened.)

7Then a cloud appeared and covered them, and a Voice Came From The Cloud:

8Suddenly, when they looked around, they no longer saw anyone with them except JESUS.

9As they were coming down the mountain, JESUS Gave them orders not to tell anyone what they had seen until The SON of Man Had Risen from the dead. 10They kept the matter to themselves, discussing what “Rising from the dead” meant.

11And they asked HIM, “Why do the teachers of the Law say that Elijah must come first?”


“To be sure, Elijah does come first, and restores all

things. Why then is it written that The SON of Man

Must Suffer Much and Be Rejected?

13But I tell you, Elijah has come, and they have done

to him everything they wished, just as it is written

JESUS Heals a Boy Possessed by an Impure Spirit

14When they came to the other disciples, they saw a large crowd around them and the teachers of the Law arguing with them. 15As soon as all the people saw JESUS, they were overwhelmed with wonder and ran to greet HIM.

16“What are you arguing with them about?”

17A man in the crowd answered, “Teacher, I brought YOU my son, who is possessed by a spirit that has robbed him of speech. 18Whenever it seizes him, it throws him to the ground. He foams at the mouth, gnashes his teeth and becomes rigid. I asked your disciples to drive out the spirit, but they could not.”

20So they brought him. When the spirit saw JESUS, it immediately threw the boy into a convulsion. He fell to the ground and rolled around, foaming at the mouth.

“From childhood,” he answered. 22“It has often thrown him into fire or water to kill him. But if you can do anything, take pity on us and help us.”

“Everything is possible for one who believes.”

24Immediately the boy’s father exclaimed, “I do believe; help me overcome my unbelief!”

25When JESUS Saw that a crowd was running to the scene, HE Rebuked the impure spirit.

“You deaf and mute spirit,”

“I Command you, come out of him and never enter him again.”

26The spirit shrieked, convulsed him violently and came out. The boy looked so much like a corpse that many said, “He’s dead.”

27But JESUS Took him by the hand and Lifted him to his feet, and he stood up.

28After JESUS Had Gone indoors, HIS disciples asked HIM privately, “Why couldn’t we drive it out?”

29HE Replied, “This kind can come out only by prayer. ”


30They left that place and passed through Galilee. JESUS Did Not Want anyone to know where they were, 31 Because HE Was Teaching HIS disciples.


HE Said to them,

“The SON of Man Is Going To Be Delivered into the

hands of men. They will kill HIM, and after three days

32But they did not understand what HE Meant and were afraid to ask HIM about it.

33They came to Capernaum. When HE Was in the house,

“What were you arguing about on the road?”

34But they kept quiet because on the way they had argued about who was the greatest.

35Sitting Down, JESUS Called the Twelve and Said,

“Anyone who wants to be first must be the very last, and the servant of all.”

36HE Took a little child whom HE placed among them. Taking the child in HIS Arms,

HE Said to them,

37 “Whoever welcomes one of these little children in

does not welcome ME but The ONE WHO Sent ME.”

Whoever Is Not Against Us Is for Us

38“Teacher,” said John, “we saw someone driving out demons in YOUR Name and we told him to stop, because he was not one of us.”

39“Do not stop him,” JESUS Said. “For no one who does a miracle in MY Name can in the next moment say anything bad about ME, 40for whoever is not against us is for us. 41Truly I tell you, anyone who gives you a cup of water in MY Name because you belong to The MESSIAH will certainly not lose their reward.

47And if your eye causes you to stumble, pluck it out. It is better for you to enter The Kingdom of GOD with one eye than to have two eyes and be thrown into hell, 48where
“ ‘the worms that eat them do not die, and the fire is not quenched.’ 49Everyone will be salted with fire.

50“Salt is good, but if it loses its saltiness, how can you make it salty again? Have salt among yourselves, and be at peace with each other.” 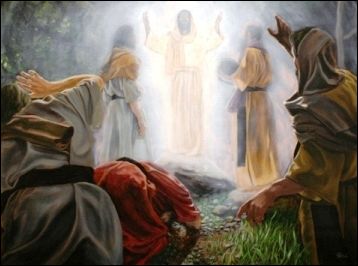 The Voice from the cloud of Glory makes it clear that JESUS Is Not on the same level as Elijah and Moses.

He Is The Beloved SON of GOD, so we must Hear HIM!

“There are many people in the worlds who say, ‘Hear me’; but our Heavenly FATHER Says “Hear HIM.” Many voices clamor for our attention: new philosophies, modern theologies, and old heresies revived, all call to us and entreat us to hear, but The FATHER Says, “Hear HIM.” (Spurgeon)

This WORD from heaven answered the disciples’ doubts after the revelation of the Suffering MESSIAH. It assured them that the plan was all right with GOD The FATHER also.

“The disciples wished to detain Moses and Elijah that they might hear them: but GOD Shows that the Law which had been in  force, and the Prophets which had prophesied, until now, must all give place to JESUS; and HE Alone Must now Be Attended to, as The Way, The Truth, and The Life.” (Clarke)

But the event left a lasting impression on these men. Peter relates what happened in 2 Peter 1:16-18, how the Voice from GOD Saying, “This Is MY Beloved SON. Hear HIM!” still rang in his ears, confirming WHO JESUS Was.

As impressive as this experience was, it in itself did not change the lives of the disciples as much as being born again did. Being born again by The SPIRIT of GOD is the great miracle, the greatest Display of The Glory of GOD ever.

“It is a better thing for a man to live near to CHRIST, and to enjoy HIS Presence, than it would be for him to be overshadowed with a bright cloud, and to hear The Divine FATHER HIMSELF Speaking out of it.” (Spurgeon)