Whoever Has Ears, Let Them Hear

The Parable of the Sower

1That same day JESUS Went Out of the house and Sat by the lake. 2Such large crowds gathered around HIM that HE Got into a boat and Sat in it, while all the people stood on the shore.

3Then HE Told them many things in parables, saying:

“A farmer went out to sow his seed. 4As he was scattering the seed, some fell along the path, and the birds came and ate it up. 5Some fell on rocky places, where it did not have much soil. It sprang up quickly, because the soil was shallow. 6But when the sun came up, the plants were scorched, and they withered because they had no root. 7Other seed fell among thorns, which grew up and choked the plants. 8Still other seed fell on good soil, where it produced a crop—a hundred, sixty or thirty times what was sown.

9 Whoever has ears, let them hear.” 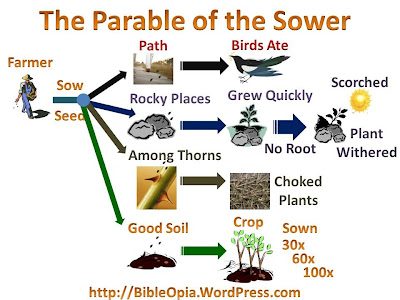 10The disciples came to HIM and asked,

“Why Do YOU Speak to the people in parables?”

“Because the knowledge of the secrets of The KINGDOM of Heaven has been given to you, but not to them.

12Whoever has will be given more, and they will have an abundance. Whoever does not have, even what they have will be taken from them.

13This Is Why I Speak to them in parables:

14In them is fulfilled the prophecy of Isaiah:

16But blessed are your eyes because they see, and your ears because they hear. 17For truly I Tell you, many prophets and righteous people longed to see what you see but did not see it, and to hear what you hear but did not hear it.

18“Listen then to what the parable of the sower means: 19When anyone hears the Message about The KINGDOM and does not understand it, the evil one comes and snatches away what was sown in their heart. This is the seed sown along the path. 20The seed falling on rocky ground refers to someone who hears The WORD and at once receives it with joy. 21But since they have no root, they last only a short time. When trouble or persecution comes because of The WORD, they quickly fall away. 22The seed falling among the thorns refers to someone who hears The WORD, but the worries of this life and the deceitfulness of wealth choke The WORD, making it unfruitful. 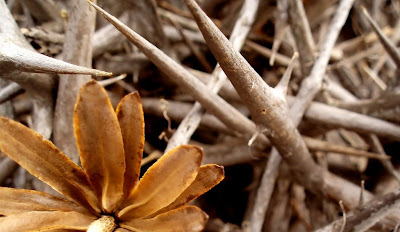 23But the seed falling on good soil refers to someone who hears The WORD and understands it. This is the one who produces a crop, yielding a hundred, sixty or thirty times what was sown.”

The Parable of the Weeds

24JESUS Told them another parable:


“The Kingdom of Heaven is like a Man Who Sowed good seed in His Field. 25But while everyone was sleeping, His enemy came and sowed weeds among the wheat, and went away. 26When the wheat sprouted and formed heads, then the weeds also appeared.

27“The owner’s servants came to HIM and said,

‘Sir, Didn’t YOU Sow good seed in YOUR field? Where then did the weeds come from?’

“The servants asked HIM,

‘Do YOU Want us to go and pull them up?’

29“ ‘No,’ HE Answered, ‘because while you are pulling the weeds, you may uproot the wheat with them.30Let both grow together until the harvest. At that time I Will Tell the harvesters: First Collect the weeds and tie them in bundles to be burned; then Gather the wheat and bring it into MY Barn.’ ”

The Parables of the Mustard Seed and the Yeast

31HE told them another parable:


“The KINGDOM of Heaven is like a mustard seed, which a man took and planted in his field. 32Though it is the smallest of all seeds, yet when it grows, it is the largest of garden plants and becomes a tree, so that the birds come and perch in its branches.”

33He told them still another parable:

“The KINGDOM of Heaven is like yeast that a woman took and mixed into about sixty pounds of flour until it worked all through the dough.”

34JESUS Spoke all these things to the crowd in parables; HE Did Not Say anything to them without using a parable.

35 So was fulfilled what was spoken through the prophet:

“I Will Open MY Mouth in parables,
I Will Utter things hidden since the creation of the world.”

The Parable of the Weeds Explained

36Then HE Left the crowd and Went Into the house. His disciples came to Him and said, “Explain to us the parable of the weeds in the field.”


“The ONE Who Sowed The Good Seed Is

The SON of Man.

38The field is the world, and the good seed stands for the people of The KINGDOM. The weeds are the people of the evil one, 39and the enemy who sows them is the devil. The harvest is the end of the age, and the harvesters are angels.

40“As the weeds are pulled up and burned in the fire, so it will be at the end of the age. 41The SON of Man Will Send Out His angels, and they will weed out of His Kingdom everything that causes sin and all who do evil.42They will throw them into the blazing furnace, where there will be weeping and gnashing of teeth. 43Then the righteous will shine like the sun in The Kingdom of their FATHER.

Whoever has ears, let them hear. 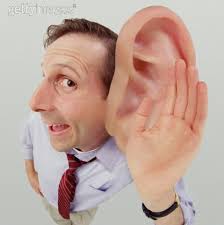 The Parables of the Hidden Treasure and the Pearl

44“The KINGDOM of Heaven is like treasure hidden in a field. When a man found it, he hid it again, and then in his joy went and sold all he had and bought that field. 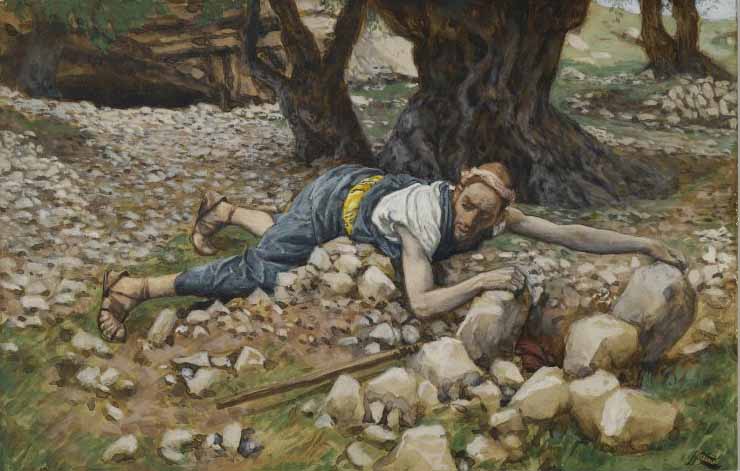 45“Again, the KINGDOM of Heaven is like a merchant looking for fine pearls.

46When he found one of great value, he went away and sold everything he had and bought it.

The Parable of the Net


47“Once again, The KINGDOM of heaven is like a net that was let down into the lake and caught all kinds of fish.

48When it was full, the fishermen pulled it up on the shore. 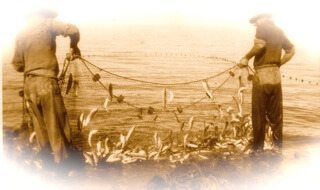 Then they sat down and collected the good fish in baskets, but threw the bad away.

49This is how it will be at the end of the age. The angels will come and separate the wicked from the righteous 50and throw them into the blazing furnace, where there will be weeping and gnashing of teeth.

51“Have you understood all these things?”

“Therefore every teacher of the Law who has become a disciple in The KINGDOM of Heaven is like the owner of a house who brings out of his storeroom new treasures as well as old.”

A Prophet Without Honor

53When JESUS Had Finished these parables, HE Moved On from there. 54Coming to HIS hometown, HE Began Teaching the people in their synagogue, and they were amazed. “Where did this man get this wisdom and these miraculous powers?” they asked. 55“Isn’t this the carpenter’s son? Isn’t HIS mother’s name Mary, and aren’t HIS brothers James, Joseph, Simon and Judas? 56Aren’t all HIS sisters with us? Where then did this man get all these things?” 57And they took offense at HIM.

But JESUS Said to them,

“A prophet is not without honor except in his own town and in his own home.”

58And HE Did Not Do many miracles there because of their lack of faith.