Judgment On The Whole Earth When The LORD JESUS Comes

Judgment on the Whole Earth in The Day of The LORD

3 “I Will Sweep Away both man and beast;
I Will Sweep Away the birds in the sky
and the fish in the sea—
and the idols that cause the wicked to stumble.”
“When I Destroy all mankind
on the face of the earth,”

4“I Will Stretch Out MY Hand against Judah
and against all who live in Jerusalem.
I Will Destroy every remnant of Baal worship in this place,
the very names of the idolatrous priests—
5those who bow down on the roofs
to worship the starry host,
those who bow down and swear by The LORD
and who also swear by Molek,
6those who turn back from following The LORD
and neither seek The LORD nor inquire of HIM.”

7Be silent Before The SOVEREIGN LORD,
for The Day of The LORD Is near.
The LORD Has Prepared a sacrifice;
HE Has Consecrated those HE Has Invited.

8“On The Day of The LORD'S Sacrifice
I Will Punish the officials
and the king’s sons
and all those clad
in foreign clothes.

9On that day I Will Punish
all who avoid stepping on the threshold,c
who fill the temple of their gods
with violence and deceit.

“a cry will go up from the Fish Gate,
wailing from the New Quarter,
and a loud crash from the hills.

11Wail, you who live in the market district ;
all your merchants will be wiped out,
all who trade with silver will be destroyed.

12At that time I Will Search Jerusalem with lamps
and punish those who are complacent,
who are like wine left on its dregs,
who think, ‘The LORD Will Do Nothing,
either Good or Bad.’

15That day will be a Day of Wrath—
a day of distress and anguish,
a day of trouble and ruin,
a day of darkness and gloom,
a day of clouds and blackness—
16a day of trumpet and battle cry
against the fortified cities
and against the corner towers.

17“I Will Bring such distress on all people
that they will grope about like those who are blind,
because they have sinned against The Lord.
Their blood will be poured out like dust
and their entrails like dung.
18Neither their silver nor their gold
will be able to save them
on The Day of The LORD'S Wrath.”
In the fire of HIS Jealousy
the whole earth will be consumed, 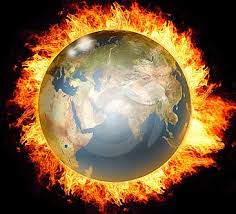 For HE Will Make a sudden end
of all who live on the earth.

1:1-6 Ruin is coming, utter ruin; destruction from The ALMIGHTY. The servants of GOD all proclaim, There is no peace for the wicked. The expressions are figurative, speaking everywhere desolation; the land shall be left without inhabitants. The sinners to be consumed are, the professed idolaters, and those that worship JEHOVAH and idols, or swear to The LORD, and to Malcham.

Those who think to divide their affections and worship between GOD and idols, will come short of acceptance with GOD; for what communion can there be between light and darkness? If satan has half, he will have all; if The LORD Has but half, HE Will Have none. Neglect of GOD shows impiety and contempt.

1:7-13 GOD'S Day is at hand; the punishment of presumptuous sinners is a sacrifice to the Justice of GOD. The Jewish royal family shall be reckoned with for their pride and vanity; and those that leap on the threshold, invading their neighbors' rights, and seizing their possessions.

The trading people and the rich merchants are called to account. Secure and careless people are reckoned with. They are secure and easy; they say in their heart, The LORD Will Not Do good, neither Will HE Do evil; that is, they deny His dispensing rewards and punishments.


But in the Day of The LORD'S Judgment, it will clearly appear that those who perish, fall a sacrifice to Divine Justice for breaking GOD'S Law, and because they have no interest by faith in the REDEEMER'S Atoning Sacrifice.

1:14-18 This warning of approaching destruction, is enough to make the sinners in Zion tremble; it refers to the Great Day of The LORD, the Day in which HE Will Show HIMSELF by taking vengeance on them. This Day of The LORD is very near; it is a Day of GOD'S Wrath. It will be a day of trouble and distress to sinners. What is a man profited if he gains the whole world, and lose his own soul? And what shall a man give in exchange for his soul?

Let us flee from the wrath to come, and choose the good part that shall never be taken from us; then we shall be prepared for every event; nothing shall separate us from The Love of GOD in CHRIST JESUS our LORD.