We Are All Hired To Work For GOD'S Vineyard


The Parable of the Workers in the Vineyard 1“For The KINGDOM of Heaven is like a Landowner WHO Went Out early in the morning to hire workers for HIS Vineyard.

2HE Agreed to pay them a denariusa for the day and Sent them into HIS Vineyard.

3“About nine in the morning HE Went Out and Saw others standing in the marketplace doing nothing. 4HE Told them, ‘You also go and work in MY Vineyard, and I Will Pay you whatever is right.’ 5So they went. 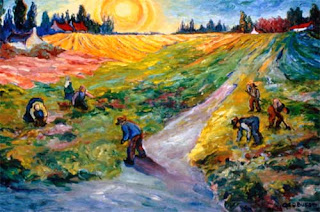 “HE Went Out again about noon and about three in the afternoon and Did the same thing.

6About five in the afternoon HE Went Out and Found still others standing around. HE Asked them, ‘Why have you been standing here all day long doing nothing?’

7“ ‘Because no one has hired us,’ they answered.

“HE Said to them,

‘You also go and work in MY Vineyard.’

8“When evening came, the Owner of the Vineyard said to His foreman, ‘Call the workers and Pay them their wages, beginning with the last ones hired and going on to the first.’ 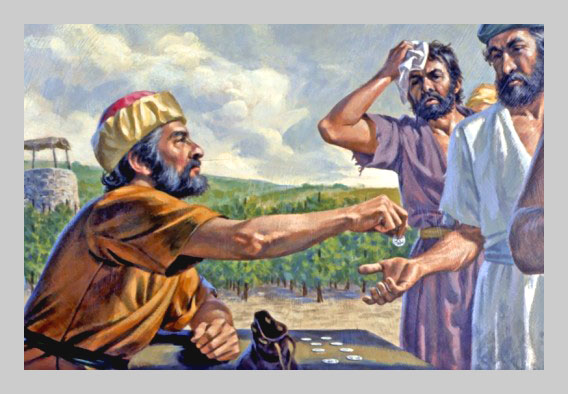 11When they received it, they began to grumble against the Landowner. 12‘These who were hired last worked only one hour,’ they said, ‘and you have made them equal to us who have borne the burden of the work and the heat of the day.’ 13“But HE Answered one of them, ‘I AM Not Deing unfair to you, friend. Didn’t you agree to work for a denarius? 14Take your pay and go. I Want To Give the one who was hired last the same as I Gave you. 15Don’t I Have the right to do what I Want with my own money? Or are you envious because I am generous?’ 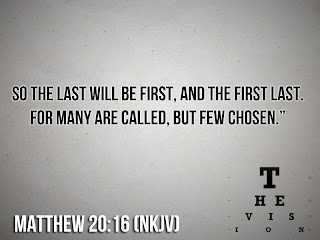 17Now JESUS Was Going Up to Jerusalem. On the way, HE Took the Twelve aside and Said to them,

18“We are going up to Jerusalem, and The SON of Man Will Be Delivered over to the chief priests and the teachers of the Law. They will condemn HIM to death 19and will hand HIM over to the Gentiles to be mocked and flogged and crucified. On the third day HE Will Be Raised To Life!”

20Then the mother of Zebedee’s sons came to JESUS with her sons and, kneeling down, asked a favor of HIM.

She said, “Grant that one of these two sons of mine may sit at YOUR Right and the other at YOUR Left in YOUR KINGDOM.”

22“You don’t know what you are asking,” JESUS Said to them.

“Can you drink the cup I AM Going To

“We can,” they answered.

23JESUS Said to them,

“You will indeed drink from MY Cup, but to sit at MY Right or Left Is Not For ME To Grant. These places belong to those for whom they have been prepared By MY FATHER.”

24When the ten heard about this, they were indignant with the two brothers.

25JESUS Called them together and said,

Served, but To Serve, and To Give HIS Life as A

29As JESUS and HIS disciples Were Leaving Jericho, a large crowd followed HIM. 30Two blind men were sitting by the roadside, and when they heard that JESUS Was Going By, they shouted, “LORD, SON of David, Have Mercy on us!”

31The crowd rebuked them and told them to be quiet, but they shouted all the louder,

32JESUS Stopped and Called them.

34JESUS Had Compassion on them and Touched their eyes. Immediately they received their sight and followed HIM.


You will indeed drink from MY Cup, but to sit at MY Right or Left Is Not For ME To Grant. These places belong to those for whom they have been prepared by MY FATHER

You shall indeed drink MY Cup. As they were disciples, it was proper that they should be assimilated to their Master. CHRIST Warns them of what will take place, that they may be prepared to endure it with patience; and, in the persons of two men, HE addresses all HIS followers. For though many believers die a natural death, and without violence or shedding of blood, yet it is common to all of them, as Paul informs us, (Romans 8:29; 2 Corinthians 3:18,) to be conformed to the Image of CHRIST; and, therefore, during their whole life, they are sheep appointed to the slaughter, (Romans 8:36.)

Is Not MINE To Give. By this reply CHRIST Surrenders nothing, but only states that The FATHER Had Not Assigned to HIM this office of appointing to each person his own peculiar place in The KINGDOM of Heaven. HE Came, indeed, in order to bring all HIS people to eternal life; but we ought to reckon it enough that the inheritance obtained by HIS Blood awaits us.

As to the degree in which some men rise above others, it is not our business to inquire and GOD Did Not Intend that it should be revealed to us by CHRIST, but that it should be reserved until the latest revelation. We have now understood CHRIST'S meaning; for HE Does Not here Reason as to HIS Power, but HE Desires us to consider for what purpose HE Was Sent by The FATHER, and what corresponds to HIS Calling, and therefore distinguishes between the secret Purpose of GOD The FATHER and the nature of that teaching which had been enjoined on HIM.

It is a useful warning, that we may learn to be wise with sobriety, and may not attempt to force our way into the hidden Mysteries of GOD, and more especially, that we may not indulge excessive curiosity in our inquiries about the future state; for;

It has not yet appeared what we shall be, until GOD Shall

It is also worthy of our notice, that these words do not imply that there will be equality among the children of GOD, after they have been admitted to the Heavenly Glory, but rather that to each is promised that degree of honor to which he has been set apart by the eternal Purpose of GOD.