1Israel was a spreading vine;
he brought forth fruit for himself.
As his fruit increased,
he built more altars;
as his land prospered,
he adorned his sacred stones. 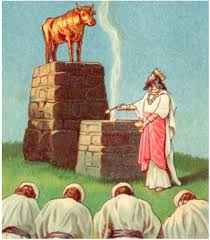 2Their heart is deceitful,
and now they must bear their guilt.
The LORD Will Demolish their altars
and Destroy their sacred stones.
3Then they will say, “We have no king
because we did not revere The LORD.
But even if we had a king,
what could he do for us?”

4They make many promises,
take false oaths
and make agreements;
therefore lawsuits spring up
like poisonous weeds in a plowed field.
5The people who live in Samaria fear
for the calf-idol of Beth Aven.a
Its people will mourn over it,
and so will its idolatrous priests,
those who had rejoiced over its splendor,
because it is taken from them into exile.
6It will be carried to Assyria
as tribute for the great king.
Ephraim will be disgraced;
Israel will be ashamed of its foreign alliances.
7Samaria’s king will be destroyed,
swept away like a twig on the surface of the waters.
8The high places of wickednessb will be destroyed—
it is the sin of Israel.
Thorns and thistles will grow up
and cover their altars.

Then they will say to the mountains, “Cover us!”
and to the hills, “Fall on us!”

9“Since the days of Gibeah, you have sinned, Israel,
and there you have remained.c
Will not war again overtake
the evildoers in Gibeah?

10When I Please, I Will Punish them;
nations will be gathered against them
to put them in bonds for their double sin.
11Ephraim is a trained heifer
that loves to thresh;
so I Will Put a yoke
on her fair neck.
I Will Drive Ephraim,
Judah must plow,
and Jacob must break up the ground.

12Sow righteousness for yourselves,
reap the fruit of unfailing love, and break up your unplowed ground;

For it is time to seek The LORD,
Until HE Comes 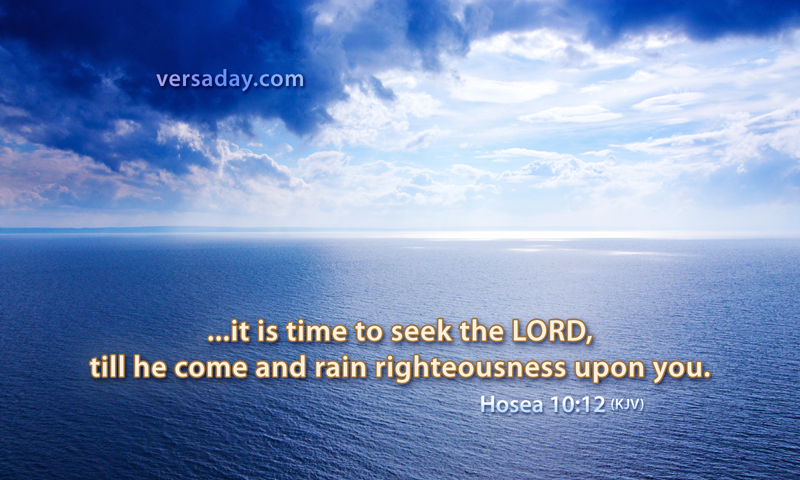 And Showers HIS Righteousness On you.

13But you have planted wickedness,
you have reaped evil,
you have eaten the fruit of deception.
Because you have depended on your own strength
and on your many warriors,
14the roar of battle will rise against your people,
so that all your fortresses will be devastated—
as Shalman devastated Beth Arbel on the day of battle,
when mothers were dashed to the ground with their children.
15So will it happen to you, Bethel,
because your wickedness is great.
When that day dawns,
the king of Israel will be completely destroyed.

This chapter is of the same argument with the former chapter, and others before that; setting forth the sins of the ten tribes, and threatening them with the Judgments of GOD for them; and exhorting them to repentance, and works of righteousness.

They are charged with unfruitfulness and ingratitude; increasing in idolatry, as they increased in temporal good things, Hosea 10:1; with a divided heart, and with irreverence of GOD, and their king; and with false swearing, covenant breaking, and injustice, Hosea 10:2; and are threatened with a removal of their king, and with the destruction of their idols, and places of idolatry, which should cause fear in the common people, and mourning among the priests, Hosea 10:1.

It is observed, that their sin had been of long continuance, though The LORD Had Been kind and good to them, in chastising them in love, giving them good laws, sending HIS prophets to exhort them to repentance and reformation, but all in vain, Hosea 10:9; wherefore they are threatened with the spoiling of their fortresses, the destruction of the people, and the cutting off of their king, Hosea 10:14.


Posted by 지구 여행객 JOHN KIM at 3:36 PM No comments: Links to this post

The Sins Israel Committed And Punishment For Them 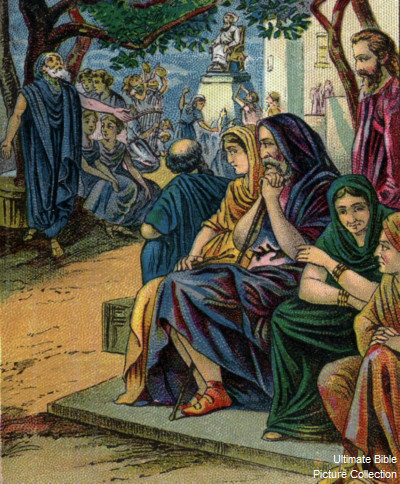 1Do not rejoice, Israel;
do not be jubilant like the other nations.
For you have been unfaithful to your GOD;
you love the wages of a prostitute
at every threshing floor.
2Threshing floors and winepresses will not feed the people;
the new wine will fail them.

3They will not remain in The LORD'S Land;
Ephraim will return to Egypt
and eat unclean food in Assyria.
4They will not pour out wine offerings to The LORD,
nor will their sacrifices please HIM.
Such sacrifices will be to them like the bread of mourners;
all who eat them will be unclean.
This food will be for themselves;
it will not come into The Temple of The LORD.

5What will you do on the day of your appointed festivals,
on the feast days of The LORD?
6Even if they escape from destruction,
Egypt will gather them,
and Memphis will bury them.
Their treasures of silver will be taken over by briers,
and thorns will overrun their tents.

7The days of punishment are coming,
the days of reckoning are at hand.
Let Israel know this.
Because your sins are so many
and your hostility so great,
the prophet is considered a fool,
the inspired person a maniac. 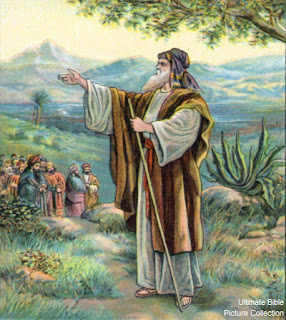 8The prophet, along with my GOD,
is the watchman over Ephraim,a
yet snares await him on all his paths,
and hostility in The House of his GOD.
9They have sunk deep into corruption,
as in the days of Gibeah.
GOD Will Remember their wickedness
and Punish them for their sins.

10“When I found Israel,
it was like finding grapes in the desert;
when I saw your ancestors,
it was like seeing the early fruit on the fig tree.
But when they came to Baal Peor,
they consecrated themselves to that shameful idol
and became as vile as the thing they loved.

11Ephraim’s glory will fly away like a bird—
no birth, no pregnancy, no conception.
12Even if they rear children,
I Will Bereave them of every one.
Woe to them
when I Turn Away from them!

13I Have Seen Ephraim, like Tyre,
Planted in a pleasant place.
But Ephraim will bring out
their children to the slayer.”
14Give them, LORD—
What Will YOU Give them?
Give them wombs that miscarry
and breasts that are dry.
15“Because of all their wickedness in Gilgal,
I Hated them there.
Because of their sinful deeds,
I Will drive them Out of MY House.
I Will No Longer Love them;
all their leaders are rebellious.

16Ephraim is blighted,
their root is withered,
they yield no fruit.
Even if they bear children,
I Will Slay their cherished offspring.”

17My GOD Will Reject them
because they have not obeyed HIM;
they will be wanderers among the nations.


This chapter is an address to Israel or the ten tribes, and contains either a new sermon, or is a very considerable part of the former upon the same subject, the sins and punishment of that people.

It begins with an instruction to them, not to rejoice in their prosperity, as others did; since it would soon be at an end, because of their idolatry, which was everywhere committed, and for which they expected a reward of temporal good things, Hosea 9:1; but, on the contrary, they are threatened with famine, with want both of corn and wine, Hosea 9:2; and with an ejection out of their land into foreign countries; where they should be obliged to eat things unclean by their law, Hosea 9:3; and where their sacrifices and solemnities should be no more attended to, Hosea 9:4; where their carcasses should fall and be buried, while their own country and houses lay waste and desolate, Hosea 9:6.

Whatsoever their foolish and mad prophets said to the contrary, who pretended to be with GOD, and know HIS Will, and were a snare to them that gave heed to them, and brought hatred on them, the time of their punishment would certainly come, Hosea 9:7; and their iniquities would be remembered and visited; seeing their corruptions were deep, like those that appeared in Gibeah, in the days of old, Hosea 9:9; they act the same ungrateful part their fathers had done, of whom they were a degenerate offspring, Hosea 9:10; wherefore for these, and other offenses mentioned, they are threatened with being bereaved of their children, and drove out of their land, to wander among the nations, Hosea 9:11.

Posted by 지구 여행객 JOHN KIM at 3:34 PM No comments: Links to this post

Sowing The Wind And Reaping The Whirlwind

1“Put the trumpet to your lips!
An eagle is over The House of The LORD
because the people have broken MY Covenant
and rebelled against MY Law.

2Israel cries out to ME,
‘Our GOD, we acknowledge YOU!’

3But Israel has rejected what is good;
an enemy will pursue him.

4They set up kings without MY Consent;
they choose princes without MY Approval.
With their silver and gold
they make idols for themselves
to their own destruction.

5Samaria, throw out your calf-idol!
MY Anger Burns Against them.
How long will they be incapable of purity?

6They are from Israel!
This calf—a metalworker has made it;
it is not GOD.
It will be broken in pieces,
that calf of Samaria.

7“They sow the wind

and reap the whirlwind. 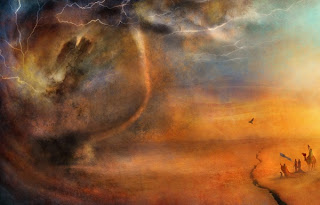 The stalk has no head;
it will produce no flour.
Were it to yield grain,
foreigners would swallow it up.

8Israel is swallowed up;
now she is among the nations
like something no one wants.

9For they have gone up to Assyria
like a wild donkey wandering alone.
Ephraim has sold herself to lovers.

10Although they have sold themselves among the nations,
I Will Now Gather them together.
They will begin to waste away
under the oppression of the mighty king.

12 I wrote for them the many things of MY Law,
but they regarded them as something foreign.

13Though they offer sacrifices as gifts to ME,
and though they eat the meat,
The LORD Is Not Pleased With them.
Now HE Will Remember their wickedness
and Punish their sins:
They will return to Egypt.

14Israel has forgotten their MAKER
and built palaces; Judah has fortified many towns.
But I Will Send fire on their cities
that will consume their fortresses.”

This chapter treats of the sins and punishment of Israel for them, as the preceding; it is threatened and proclaimed that an enemy should come swiftly against them, because of their transgression of the Covenant and Law of GOD, Hosea 8:1.

Their hypocrisy is exposed, Hosea 8:2; they are charged with the rejection of that which is good, and therefore should be pursued by the enemy, Hosea 8:3; with setting up kings and princes without consulting The LORD, Hosea 8:4; and with making of idols, particularly the golden calves, which would be of no use to them, disappoint them, and at last be broken to pieces, Hosea 8:4; their seeking to their neighbors for help, and entering into alliances with them, are represented as vain and fruitless, and issuing in their ruin and destruction, Hosea 8:7.

Their sins of multiplying altars, contrary to the Law of GOD, and in contempt of it, and offering sacrifices to The LORD, are observed; and they with a visitation from HIM, Hosea 8:11; and the chapter is concluded with some notice and Judah, the one building palaces, and multiplying fenced cities, which should be consumed by fire, Hosea 8:14.

Posted by 지구 여행객 JOHN KIM at 3:32 PM No comments: Links to this post