The Duty Of The Watchmen

Renewal of Ezekiel’s Call as Watchman

7“Son of man, I Have Made you a watchman for the people of Israel; so hear The Word I Speak and give them warning from ME.8When I Say to the wicked, ‘You wicked person, you will surely die,’ and you do not speak out to dissuade them from their ways, that wicked person will die fora their sin, and I Will Hold you accountable for their blood. 9But if you do warn the wicked person to turn from their ways and they do not do so, they will die for their sin, though you yourself will be saved.

10“Son of man, say to the Israelites, ‘This is what you are saying: “Our offenses and sins weigh us down, and we are wasting away because of them. How then can we live?” ’ 11Say to them,

‘As Surely As I live,


I Take No Pleasure in the death of the wicked, but

rather that they turn from their ways and live. Turn!

Turn from your evil ways! Why will you die, people of

12“Therefore, son of man, say to your people, ‘If someone who is righteous disobeys, that person’s former righteousness will count for nothing. And if someone who is wicked repents, that person’s former wickedness will not bring condemnation. The righteous person who sins will not be allowed to live even though they were formerly righteous.’ 13If I tell a righteous person that they will surely live, but then they trust in their righteousness and do evil, none of the righteous things that person has done will be remembered; they will die for the evil they have done.

14 And if I say to a wicked person, ‘You will surely die,’ but they then turn away from their sin and do what is just and right— 15 if they give back what they took in pledge for a loan, return what they have stolen, follow the decrees that give life, and do no evil—that person will surely live; they will not die. 16None of the sins that person has committed will be remembered against them. They have done what is just and right; they will surely live. 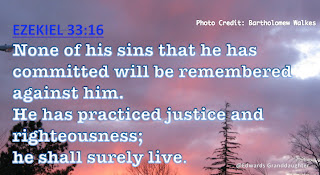 
21In the twelfth year of our exile, in the tenth month on the fifth day, a man who had escaped from Jerusalem came to me and said, “The city has fallen!” 22Now the evening before the man arrived, The Hand of The LORD Was On me, and HE Opened my mouth before the man came to me in the morning. So my mouth was opened and I was no longer silent.


24“Son of man, the people living in those ruins in the land of Israel are saying, ‘Abraham was only one man, yet he possessed the land. But we are many; surely the land has been given to us as our possession.’ 25Therefore say to them,

27“Say this to them: ‘This Is What The SOVEREIGN LORD Says: As Surely As I Live, those who are left in the ruins will fall by the sword, those out in the country I Will Give to the wild animals to be devoured, and those in strongholds and caves will die of a plague. 28I Will Make the land a desolate waste, and her proud strength will come to an end, and the mountains of Israel will become desolate so that no one will cross them.

29 Then they will know that

I AM The LORD,


When I Have Made the land a desolate waste because of all the detestable things they have done.’

30“As for you, son of man, your people are talking together about you by the walls and at the doors of the houses, saying to each other, ‘Come and Hear The Message That Has Come From The LORD.’

31MY people come to you, as they usually do, and sit before you to hear your words, but they do not put them into practice. Their mouths speak of love, but their hearts are greedy for unjust gain. 32 Indeed, to them you are nothing more than one who sings love songs with a beautiful voice and plays an instrument well, for they hear your words but do not put them into practice.

33“When all this comes true—and it surely will—then they will know that a prophet has been among them.”

This chapter treats of the prophet's duty, and the people's sins; contains a vindication of the Justice of GOD; a threatening of destruction to those who remained in the land after the taking of the city; and a detection of the hypocrisy of the prophet's hearers.

The duty of a watchman in general is declared, Ezekiel 33:1, an application of this to the prophet, Ezekiel 33:7, the sum of whose business is to warn the wicked man of his wickedness; and the consequence of doing, or not doing it, is expressed, Ezekiel 33:8, an objection of the people, and the prophet's answer to it, Ezekiel 33:10, who is bid to acquaint them, that a righteous man trusting to his righteousness, and sinning, should not live; and that a sinner repenting of his sins should not die, Ezekiel 33:12, the people's charge of inequality in the Ways of GOD is retorted upon them, and removed from The LORD, and proved against them, Ezekiel 33:17, then follows a prophecy, delivered out after the news was brought of the taking of the city, threatening with ruin those that remained in the land, confident of safety, and that for their sins, which are particularly enumerated, Ezekiel 33:21.

And the chapter is closed with a discovery of the hypocrisy of those that attended the prophet's ministry, Ezekiel 33:30.