You Will Know That I AM JEHOVAH

Doom for the Mountains of Israel

1The WORD of The LORD Came to me:


2“Son of man, set your face against the mountains of Israel; prophesy against them

‘You mountains of Israel, hear The WORD of The SOVEREIGN LORD.


This Is What The SOVEREIGN LORD Says to the mountains and hills, to the ravines and valleys:


I AM About To Bring a sword against you, and I Will Destroy your high places. 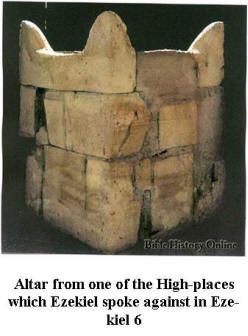 5I will lay the dead bodies of the Israelites in front of their idols, and I Will Scatter your bones around your altars. 6Wherever you live, the towns will be laid waste and the high places demolished, so that your altars will be laid waste and devastated, your idols smashed and ruined, your incense altars broken down, and what you have made wiped out. 7Your people will fall slain among you,


and you will know that I AM The LORD.

8“ ‘But I Will Spare some, for some of you will escape the sword when you are scattered among the lands and nations.

9Then in the nations where they have been carried captive, those who escape will remember ME—


They will loathe themselves for the evil they have done and for all their detestable practices.


10And they will know that I AM The LORD; I Did Not Threaten in vain to bring this calamity on them.

11“ ‘This Is What The SOVEREIGN LORD Says:


Strike your hands together and stamp your feet and cry out “Alas!” because of all the wicked and detestable practices of the people of Israel, for they will fall by the sword, famine and plague. 12One who is far away will die of the plague, and one who is near will fall by the sword, and anyone who survives and is spared will die of famine. So Will I pour out MY Wrath on them.


13And they will know that I AM The LORD,


when their people lie slain among their idols around their altars, on every high hill and on all the mountaintops, under every spreading tree and every leafy oak—places where they offered fragrant incense to all their idols.14And I Will Stretch Out MY Hand against them and Make the land a desolate waste from the desert to Diblah —wherever they live.

The former prophecies concerned the city of Jerusalem and the inhabitants of Judaea. The present is addressed to the whole land and people of Israel, which is to be included in a like Judgment.

The ground of the Judgment is "idolatry," and the whole rests on Deuteronomy 12. The prophecy is against the "mountains" of Israel, because the mountains and valleys were the seats of idol-worship.

It is also the proclamation of the final Judgment of Israel. It is the picture of the future Judgment of the adulterous world full of idols.