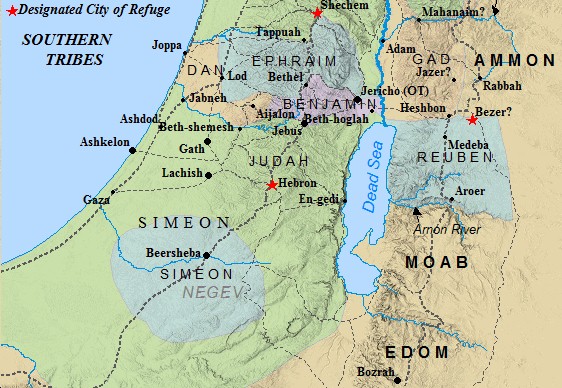 1The allotment for the tribe of Judah, according to its clans, extended down to the territory of Edom, to the Desert of Zin in the extreme south.

2Their southern boundary started from the bay at the southern end of the Dead Sea, 3crossed south of Scorpion Pass, continued on to Zin and went over to the south of Kadesh Barnea. Then it ran past Hezron up to Addar and curved around to Karka. 4It then passed along to Azmon and joined the Wadi of Egypt, ending at the Mediterranean Sea. This is theira southern boundary.

5The eastern boundary is the Dead Sea as far as the mouth of the Jordan.

The northern boundary started from the bay of the sea at the mouth of the Jordan, 6went up to Beth Hoglah and continued north of Beth Arabah to the Stone of Bohan son of Reuben. 7The boundary then went up to Debir from the Valley of Achor and turned north to Gilgal, which faces the Pass of Adummim south of the gorge. It continued along to the waters of En Shemesh and came out at En Rogel. 8Then it ran up the Valley of Ben Hinnom along the southern slope of the Jebusite city (that is, Jerusalem). From there it climbed to the top of the hill west of the Hinnom Valley at the northern end of the Valley of Rephaim. 9From the hilltop the boundary headed toward the spring of the waters of Nephtoah, came out at the towns of Mount Ephron and went down toward Baalah (that is, Kiriath Jearim). 10Then it curved westward from Baalah to Mount Seir, ran along the northern slope of Mount Jearim (that is, Kesalon), continued down to Beth Shemesh and crossed to Timnah. 11It went to the northern slope of Ekron, turned toward Shikkeron, passed along to Mount Baalah and reached Jabneel. The boundary ended at the sea.

12The western boundary is the coastline of the Mediterranean Sea.

These are the boundaries around the people of Judah by their clans.

13In accordance with The LORD'S Command to him, Joshua gave to Caleb son of Jephunneh a portion in Judah—Kiriath Arba, that is, Hebron. (Arba was the forefather of Anak.) 14From Hebron Caleb drove out the three Anakites—Sheshai, Ahiman and Talmai, the sons of Anak. 15From there he marched against the people living in Debir (formerly called Kiriath Sepher). 16And Caleb said, “I will give my daughter Aksah in marriage to the man who attacks and captures Kiriath Sepher.” 17Othniel son of Kenaz, Caleb’s brother, took it; so Caleb gave his daughter Aksah to him in marriage.

18One day when she came to Othniel, she urged himb to ask her father for a field. When she got off her donkey, Caleb asked her, “What can I do for you?”

19She replied, “Do me a special favor. Since you have given me land in the Negev, give me also springs of water.” So Caleb gave her the upper and lower springs.

20This is the inheritance of the tribe of Judah, according to its clans: 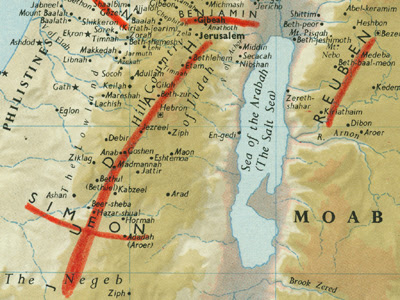 21The southernmost towns of the tribe of Judah in the Negev toward the boundary of Edom were:

33In the western foothills:

48In the hill country: 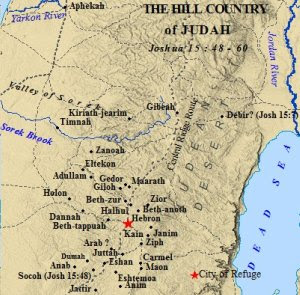 60Kiriath Baal (that is, Kiriath Jearim) and Rabbah—two towns and their villages.

63Judah could not dislodge the Jebusites, who were living in Jerusalem; to this day the Jebusites live there with the people of Judah.