1Saul told his son Jonathan and all the attendants to kill David. But Jonathan had taken a great liking to David 2and warned him, “My father Saul is looking for a chance to kill you. Be on your guard tomorrow morning; go into hiding and stay there. 3I will go out and stand with my father in the field where you are. I’ll speak to him about you and will tell you what I find out.”

4Jonathan spoke well of David to Saul his father and said to him, “Let not the king do wrong to his servant David; he has not wronged you, and what he has done has benefited you greatly. 5He took his life in his hands when he killed the Philistine. The LORD Won a great victory for all Israel, and you saw it and were glad. Why then would you do wrong to an innocent man like David by killing him for no reason?”

6Saul listened to Jonathan and took this oath: “As surely As The LORD Lives, David will not be put to death.”

7So Jonathan called David and told him the whole conversation. He brought him to Saul, and David was with Saul as before.

8Once more war broke out, and David went out and fought the Philistines. He struck them with such force that they fled before him.

9But an evil spirit from The LORD came on Saul as he was sitting in his house with his spear in his hand. While David was playing the lyre, 10Saul tried to pin him to the wall with his spear, but David eluded him as Saul drove the spear into the wall. That night David made good his escape.

11Saul sent men to David’s house to watch it and to kill him in the morning. But Michal, David’s wife, warned him, “If you don’t run for your life tonight, tomorrow you’ll be killed.”


12 So Michal let David down through a window, and he fled and escaped. 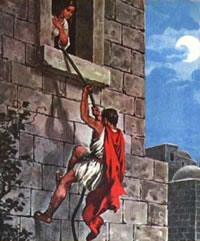 13Then Michal took an idol and laid it on the bed, covering it with a garment and putting some goats’ hair at the head.

14When Saul sent the men to capture David, Michal said, “He is ill.”

15Then Saul sent the men back to see David and told them, “Bring him up to me in his bed so that I may kill him.” 16But when the men entered, there was the idol in the bed, and at the head was some goats’ hair.


“Why did you deceive me like this and send my enemy away so that he escaped?”

18When David had fled and made his escape, he went to Samuel at Ramah and told him all that Saul had done to him. Then he and Samuel went to Naioth and stayed there. 19 Word came to Saul: “David is in Naioth at Ramah”; 20so he sent men to capture him. But when they saw a group of prophets prophesying, with Samuel standing there as their leader, The SPIRIT of GOD Came On Saul’s men, and they also prophesied. 21Saul was told about it, and he sent more men, and they prophesied too. Saul sent men a third time, and they also prophesied. 22Finally, he himself left for Ramah and went to the great cistern at Seku. And he asked,


“Where are Samuel and David?”

“Over in Naioth at Ramah,” they said.

23So Saul went to Naioth at Ramah. But The SPIRIT of GOD Came even on him, and he walked along prophesying until he came to Naioth.


24He stripped off his garments, and he too prophesied in Samuel’s presence. He lay naked all that day and all that night. This is why people say,


“Is Saul also among the prophets?”

In the time of trouble, David made JEHOVAH his Refuge


Michal's trick to gain time until David got to a distance was allowable, but her falsehood manifests that she was not influenced by the same spirit of piety which had dictated Jonathan's language to Saul.

In fleeing to Samuel, David made GOD his refuge. Samuel, as a prophet, was best able to advise him what to do in this day of distress. He met with little rest or satisfaction in Saul's court, therefore went to seek it in Samuel's people. What little pleasure is to be had in this world, those have who live a life of communion with GOD; to that David returned in the time of trouble.

So impatient was Saul after David's blood, so restless against him, that although baffled by one providence after another, he could not see that David was under the special protection of GOD. And when GOD Will Take this way To Protect David, even Saul prophesies. Many have great gifts, yet no grace; they may prophesy in CHRIST's Name, yet are disowned by Him.


Let us daily seek for renewing Grace of The HOLY SPIRIT, which shall be in us as a well of water springing up into everlasting life. Let us cleave to truth and holiness with full purpose of heart. In every danger and trouble, let us seek protection, comfort, and direction in GOD'S Providence.