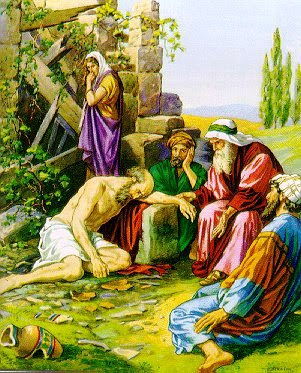 2“How I long for the months gone by,
for the days when GOD Watched Over me,
3when HIS Lamp Shone on my head
and by HIS Light I walked through darkness!
4Oh, for the days when I was in my prime,
when GOD’S Intimate Friendship Blessed my house,
5when The ALMIGHTY Was still with me
and my children were around me,
6when my path was drenched with cream
and the rock poured out for me streams of olive oil.
7“When I went to the gate of the city
and took my seat in the public square,
8the young men saw me and stepped aside
and the old men rose to their feet;
9the chief men refrained from speaking
and covered their mouths with their hands;
10the voices of the nobles were hushed,
and their tongues stuck to the roof of their mouths.
11Whoever heard me spoke well of me,
and those who saw me commended me,
12because I rescued the poor who cried for help,
and the fatherless who had none to assist them.
13The one who was dying blessed me;
I made the widow’s heart sing.
14I put on righteousness as my clothing;
justice was my robe and my turban.
15I was eyes to the blind
and feet to the lame.
16I was a father to the needy;
I took up the case of the stranger.
17I broke the fangs of the wicked
and snatched the victims from their teeth.
18“I thought, ‘I will die in my own house,
my days as numerous as the grains of sand.
19My roots will reach to the water,
and the dew will lie all night on my branches.
20My glory will not fade;
the bow will be ever new in my hand.’
21“People listened to me expectantly,
waiting in silence for my counsel.
22After I had spoken, they spoke no more;
my words fell gently on their ears.
23They waited for me as for showers
and drank in my words as the spring rain.
24When I smiled at them, they scarcely believed it;
the light of my face was precious to them.
25I chose the way for them and sat as their chief;
I dwelt as a king among his troops;
I was like one who comforts mourners. 
After that excellent discourse concerning wisdom in the foregoing chapter Job sat down and paused awhile, he would give room for his friends, if they pleased, to make their remarks on what he had said; but they had nothing to say, and therefore, he went on with his discourse concerning his own affairs, as recorded in this and the two following chapters, in which,

I. He describes the height of the prosperity from which he had fallen. And,

II. The depth of the adversity into which he had fallen; and this he does to move the pity of his friends, and to justify, or at least excuse, his own complaints. But then,

III. To obviate his friends' censures of him, he makes a very ample and particular protestation of his own integrity notwithstanding.

In this chapter he looks back to the days of his prosperity, and shows,

2. What a great deal of honor and power he had in his country, and what respect was paid him by all sorts of people (v. 7-10).

All this he enlarges upon, to aggravate his present calamities; like Naomi, "I went out full," but am brought “home again empty.”