JESUS' FATHER In Heaven Is Our FATHER Too


“for it is written:

“ ‘I Will Strike The SHEPHERD,
and the sheep will be scattered.’

28But after I Have Risen, I Will Go Ahead of you into Galilee.”

29Peter declared, “Even if all fall away, I will not.”

twice you yourself will disown ME three times.”


“Even if I have to die with YOU, I will never disown YOU.”


And all the others said the same.

32They went to a place called Gethsemane, and JESUS Said to HIS disciples,


33HE Took Peter, James and John along with Him, and HE Began to be deeply distressed and troubled.


34“MY Soul Is Overwhelmed with sorrow to the point of death,”


HE Said to them.

35Going a little farther, HE Fell to the ground and Prayed that if possible the hour might pass from HIM. 
“Everything is possible for YOU.

Take this cup from ME. Yet Not What I Will, But What 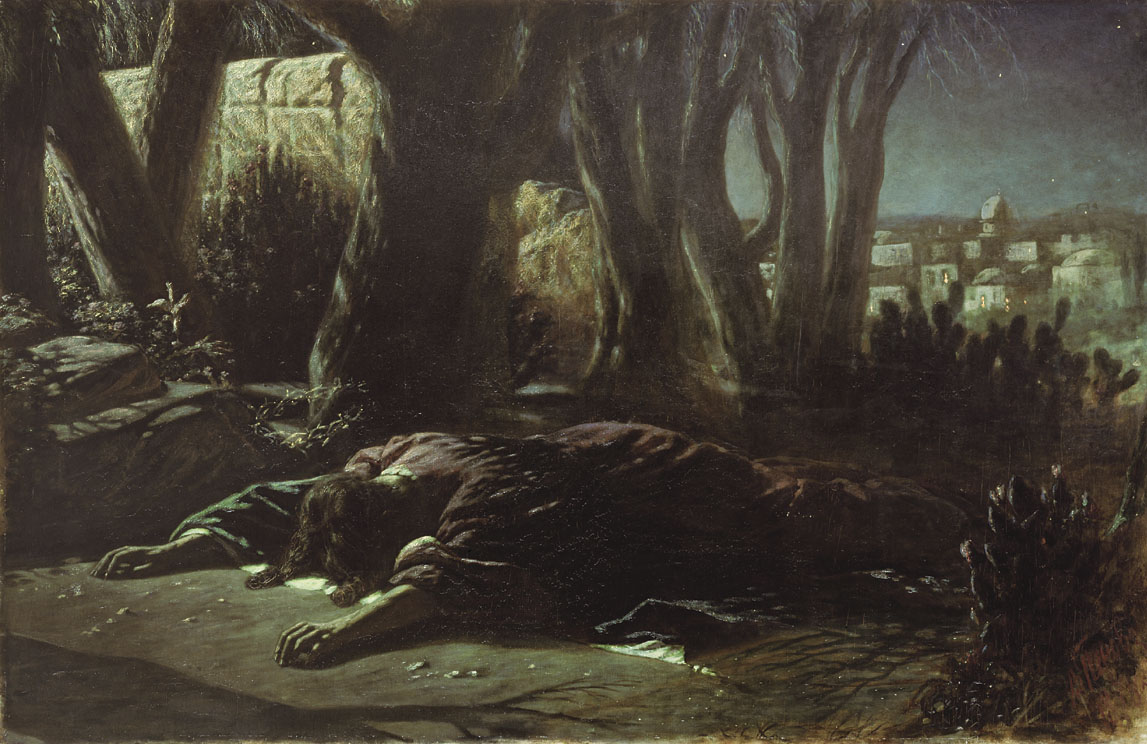 37Then HE Returned to HIS disciples and Found them sleeping.


HE Said to Peter,


“are you asleep? Couldn’t you keep watch for one hour? 38Watch and pray so that you will not fall into temptation. The spirit is willing, but the flesh is weak.”

39Once more HE Went Away and Prayed the same thing. 40When HE Came Back, HE Again Found them sleeping, because their eyes were heavy. They did not know what to say to HIM.

41Returning the third time, HE Said to them,


“Are you still sleeping and resting? Enough! The hour has come. Look, The SON of Man Is Delivered into the hands of sinners.

43Just As HE Was Speaking, Judas, one of the Twelve, appeared. With him was a crowd armed with swords and clubs, sent from the chief priests, the teachers of the Law, and the elders.

44Now the betrayer had arranged a signal with them: “The one I kiss is the Man; arrest HIM and lead HIM away under guard.” 45Going at once to JESUS, Judas said, “Rabbi!” and kissed HIM.

46The men seized JESUS and arrested HIM.

47Then one of those standing near drew his sword and struck the servant of the high priest, cutting off his ear.


“that you have come out with swords and clubs to capture ME?49Every day I Was With you, Teaching in the Temple courts, and you did not arrest ME. But The Scriptures must be fulfilled.”


50Then everyone deserted HIM and fled.

51 A young man, wearing nothing but a linen garment, was following JESUS. When they seized him, 52he fled naked, leaving his garment behind.

JESUS Before the Sanhedrin


53They took JESUS to the high priest, and all the chief priests, the elders and the teachers of the Law came together.

54Peter followed HIM at a distance, right into the courtyard of the high priest. There he sat with the guards and warmed himself at the fire.

55The chief priests and the whole Sanhedrin were looking for evidence against JESUS so that they could put HIM to death, but they did not find any. 56Many testified falsely against HIM, but their statements did not agree.

57Then some stood up and gave this false testimony against HIM:

‘I will destroy this Temple made with human hands and in three days will build another, not made with hands.’ ”


59Yet even then their testimony did not agree.

60Then the high priest stood up before them and asked Jesus, “Are YOU Not Going To Answer? What is this testimony that these men are bringing against YOU?”


61But JESUS Remained silent and Gave no answer.

Again the high priest asked HIM,

“Are YOU The MESSIAH, The SON of 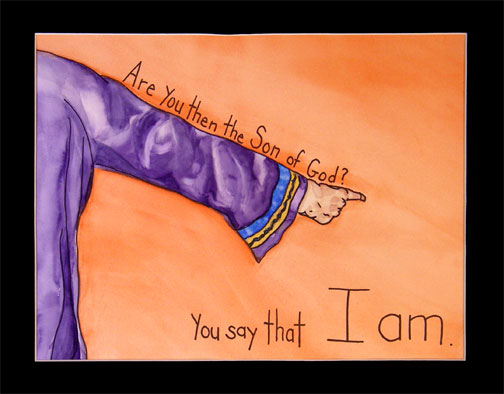 of The MIGHTY ONE and Coming on the clouds of Heaven.”

63The high priest tore his clothes. “Why do we need any more witnesses?” he asked. 64“You have heard the blasphemy. What do you think?” 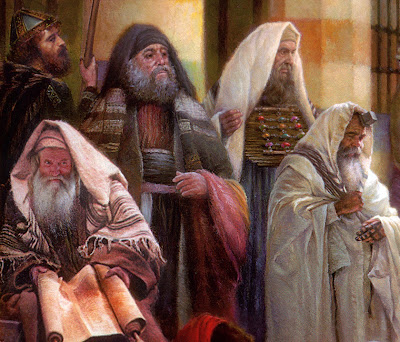 They all condemned HIM as worthy of death. 65Then some began to spit at HIM; they blindfolded HIM, struck HIM with their fists, and said, “Prophesy!” And the guards took HIM and beat HIM.

66While Peter was below in the courtyard, one of the servant girls of the high priest came by. 67When she saw Peter warming himself, she looked closely at him.

“You also were with that Nazarene, JESUS,” she said.

68But he denied it. “I don’t know or understand what you’re talking about,” he said, and went out into the entryway.g

69When the servant girl saw him there, she said again to those standing around, “This fellow is one of them.” 70Again he denied it.

After a little while, those standing near said to Peter, “Surely you are one of them, for you are a Galilean.”

71He began to call down curses, and he swore to them,


“I don’t know this man you’re talking about.”

72Immediately the rooster crowed the second time.h Then Peter remembered The WORD JESUS Had Spoken to him:


“Before the rooster crows twicei you will disown ME


And he broke down and wept.


“Abba, FATHER, everything is possible for YOU. Take this cup from ME. Yet not What I Will, but What YOU Will.”

Gethsemane: This is a place just east of the Temple Mount area in Jerusalem, across the ravine of the Brook Kidron, and on the lower slopes of the Mount of Olives. Surrounded by ancient olive trees, Gethsemane means “olive press” - it was a place where olives from the neighborhood were crushed for their oil. So too, The SON of GOD Would Be Crushed here.

HE Began To Be Troubled and deeply Distressed. My Soul is exceedingly sorrowful, even to death: If JESUS Knew what The FATHER’S Will Was, why such agony? It was because JESUS Was To Be a sacrifice for sins, and HE Wasn’t an unknowing sacrificial animal and HE Was no victim of circumstances. HE Willingly Resolved to lay down HIS Life.

What was it that affected JESUS so? It was not so much the horror of physical torture, but the spiritual horror of the Cross - of being made sin (2 Corinthians 5:21). This is what made JESUS troubled and deeply distressed.

WHO, in the Days of HIS Flesh, When HE Had Offered Up prayers and supplications, with vehement cries and tears to HIM WHO Was Able To Save HIM from death, and Was Heard because of HIS Godly Fear, though HE Was A SON, yet HE Learned obedience by the things which HE Suffered.

“HIS Holy Soul Shrank from the awfulness of being made sin upon the tree. It was not death, but the DIVINE Anger against sin, the imputation to HIM of all our iniquities that filled HIS Soul with horror. There was no conflict of Wills.” (Ironside)

ABBA, FATHER: In this moment of deep distress, JESUS Didn’t Feel far from GOD The FATHER. HE Felt so close to The FATHER that HE Used the Name Abba, a child’s familiar name for “daddy.”

Take this cup away from ME: In response to JESUS’ deeply moved prayers, The FATHER Did Not Take the cup from JESUS; but HE Strengthened JESUS to be able to take - and drink - the cup.

What cup? Repeatedly in the Old Testament, the cup is a powerful picture of the Wrath and Judgment of GOD:

JESUS Became, as it were, an enemy of GOD, WHO Was Judged and Forced to drink the cup of the FATHER’S Fury, so we would not have to drink from that cup – this was the source of JESUS’ agony.

Matthew 20:22-23 speaks of a cup that the followers of JESUS must also drink. “In any case, our cup can never be as deep or as bitter as was HIS, and there were in HIS Cup some ingredients that never will be found in ours. The bitterness of sin was there, but HE Has Taken that Away for all who believe in HIM. HIS FATHER’S Wrath Was there, but HE Drank that all up, and left not a single dreg for any one of HIS people.” (Spurgeon)

Nevertheless, not what I Will, but what YOU Will: JESUS Came to a point of decision in Gethsemane. It wasn’t that HE Had Not Decided nor Consented before, but now HE Had Come upon a unique point of decision. HE Drank the cup at Calvary, but HE Decided once for all to drink it at Gethsemane. The struggle of the Cross was won at the Garden of Gethsemane.

This struggle at Gethsemane - the place of crushing - has an important place in fulfilling GOD’S Plan of Redemption. If JESUS Failed here, HE Would Have Failed at the Cross. HIS Success here made the victory at the Cross possible.

If it were possible: JESUS Wasn’t Asking for permission to let humanity perish in hell; HE Was Asking The FATHER, “If there is any other possible way to save humanity other than the agony which awaits ME at the Cross - let it be.” Yet there was no other way, So JESUS Will Go to the Cross.

This Prayer of JESUS eliminates any other way of salvation. If there is another way, HIS Death was not necessary and HIS Prayer was not answered.