1That night all the members of the community raised their voices and wept aloud. 2All the Israelites grumbled against Moses and Aaron, and the whole assembly said to them,


“If only we had died in Egypt! Or in this wilderness!

3Why Is The LORD Bringing us to this land only to let us fall by the sword? Our wives and children will be taken as plunder. Wouldn’t it be better for us to go back to Egypt?”

4And they said to each other,

“We should choose a leader and go back to Egypt.”

5Then Moses and Aaron fell facedown in front of the whole Israelite assembly gathered there. 6Joshua son of Nun and Caleb son of Jephunneh, who were among those who had explored the land, tore their clothes

7and said to the entire Israelite assembly,

“The land we passed through and explored is exceedingly good. 8If The LORD Is Pleased With us, HE WILL Lead us into that land, a land flowing with milk and honey, and WILL Give it to us. 9Only do not rebel against The LORD. And do not be afraid of the people of the land, because we will devour them. Their protection is gone, but The LORD Is With us. Do not be afraid of them.”

10But the whole assembly talked about stoning them.

Then The Glory of The LORD Appeared at the tent of

meeting to all the Israelites.

11The LORD Said To Moses,

“How long will these people treat ME with contempt? How long will they refuse to believe In ME, in spite of all the signs I Have Performed Among them? 12I WILL Strike them Down With a plague and destroy them, but I WILL Make you into a nation greater and stronger than they.”

13Moses said To The LORD,

“Then the Egyptians will hear about it! By YOUR Power YOU Brought these people Up from among them. 14And they will tell the inhabitants of this land about it. They have already heard that YOU, LORD, Are With these people and that YOU, LORD, Have Been Seen face to face, that YOUR Cloud Stays Over them, and that YOU Go Before them in a pillar of cloud by day and a pillar of fire by night. 15If YOU Put all these people to death, Leaving none alive, the nations who have heard this report about YOU will say,

16 ‘The LORD Was Not Able To Bring these people into the land HE Promised them on oath, so HE Slaughtered them in the wilderness.’

17“Now May The LORD'S Strength Be Displayed, Just

As YOU Have Declared:

18 ‘The LORD Is Slow to anger, Abounding in love and

Forgiving sin and rebellion. Yet HE Does Not Leave

the guilty unpunished; HE Punishes the children for

the sin of the parents to the third and fourth 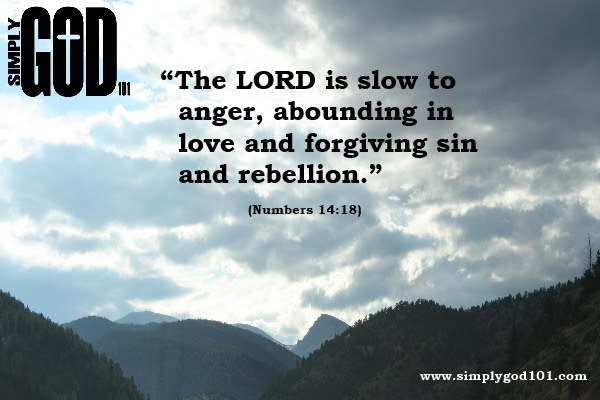 19In accordance with YOUR great Love, Forgive the sin of these people, Just As YOU Have Pardoned them from the time they left Egypt until now.”

“I Have Forgiven them, as you asked.

21Nevertheless, As Surely As I Live and As Surely As The Glory of The LORD Fills the whole earth, 22not one of those who saw MY Glory and the signs I Performed in Egypt and in the wilderness but who disobeyed ME and Tested ME ten times— 23not one of them will ever see the land I Promised on oath to their ancestors. No one who has treated ME with contempt will ever see it. 24But because MY servant Caleb has a different spirit and follows ME wholeheartedly, I WILL Bring him into the land he went to, and his descendants will inherit it. 25Since the Amalekites and the Canaanites are living in the valleys, turn back tomorrow and set out toward the desert along the route to the Red Sea.a ”

26The LORD Said To Moses and Aaron:


27“How long will this wicked community grumble Against ME? I Have Heard the complaints of these grumbling Israelites.

‘As Surely As I Live,

I WILL Do to you the very thing I Heard you say:


29In this wilderness your bodies will fall—every one of you twenty years old or more who was counted in the census and who has grumbled against ME.


30Not one of you will enter the land I Swore With Uplifted Hand to make your home,

except Caleb son of Jephunneh and Joshua son of Nun.

31As for your children that you said would be taken as plunder, I WILL Bring them In to enjoy the land you have rejected. 32But as for you, your bodies will fall in this wilderness. 33Your children will be shepherds here for forty years, suffering for your unfaithfulness, until the last of your bodies lies in the wilderness. 34For forty years—one year for each of the forty days you explored the land—you will suffer for your sins and know what it is like to have ME Against you.’ 35I, The LORD, Have Spoken, and I WILL Surely Do these things to this whole wicked community, which has banded together Against ME. They will meet their end in this wilderness; here they will die.”

only Joshua son of Nun and Caleb son of Jephunneh

39When Moses reported this to all the Israelites, they mourned bitterly. 40Early the next morning they set out for the highest point in the hill country, saying, “Now we are ready to go up to the land The LORD Promised. Surely we have sinned!”

41But Moses said, “Why are you disobeying The LORD'S Command? This will not succeed! 42Do not go up, because The LORD Is Not With you. You will be defeated by your enemies, 43for the Amalekites and the Canaanites will face you there. Because you have turned away From The LORD, HE Will Not Be With you and you will fall by the sword.”

44Nevertheless, in their presumption they went up toward the highest point in the hill country, though neither Moses nor the Ark of The LORD'S Covenant moved from the camp. 45Then the Amalekites and the Canaanites who lived in that hill country came down and attacked them and beat them down all the way to Hormah.


Forgive the sin of these people

At last they resolve that, instead of going forward to Canaan, they would go back to Egypt. Those who walk not In GOD'S Counsels, seek their own ruin.  But those who, like Caleb and Joshua, faithfully expose themselves For GOD, are sure to be taken under HIS Special Protection, and shall be hidden from the rage of men.


Moses made humble intercession for Israel. Herein he was a type of CHRIST WHO Prayed for those that despitefully used HIM. The pardon of a nation's sin, is the turning away the nation's punishment; and for that Moses is here so earnest. Moses argued that consistently With GOD'S character, In HIS abundant Mercies, HE Could Forgive them.