Olive Oil and Bread Set Before The LORD

2“Command the Israelites to bring you clear oil of pressed olives for the light so that the lamps may be kept burning continually. 3Outside the curtain that shields the Ark of the Covenant Law in the tent of meeting, Aaron is to tend the lamps Before The LORD from evening till morning, continually. This is to be a lasting ordinance for the generations to come. 4The lamps on the pure gold lampstand Before The LORD must be tended continually. 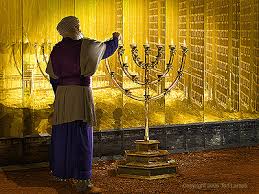 5“Take the finest flour and bake twelve loaves of bread, using two-tenths of an ephaha for each loaf.6Arrange them in two stacks, six in each stack, on the table of pure gold Before The LORD. 7By each stack put some pure incense as a memorialb portion to represent the bread and to be a food offering presented To The LORD. 8This bread is to be set out Before The LORD regularly, Sabbath after Sabbath, on behalf of the Israelites, as a lasting covenant. 9It belongs to Aaron and his sons, who are to eat it in the sanctuary area, because it is a most holy part of their perpetual share of the food offerings presented To The LORD.” 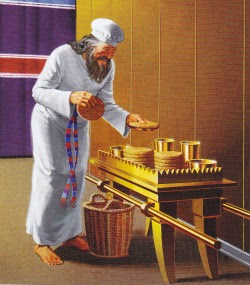 A Blasphemer Put to Death

10Now the son of an Israelite mother and an Egyptian father went out among the Israelites, and a fight broke out in the camp between him and an Israelite. 11The son of the Israelite woman blasphemed The Name with a curse; so they brought him to Moses. (His mother’s name was Shelomith, the daughter of Dibri the Danite.) 12They put him in custody until The Will of The LORD should be made clear to them.

13Then The LORD Said To Moses:

14“Take the blasphemer outside the camp. All those who heard him are to lay their hands on his head, and the entire assembly is to stone him. 15Say to the Israelites: ‘Anyone who curses their GOD will be held responsible; 16anyone who blasphemes The Name of The LORD is to be put to death. The entire assembly must stone them. Whether foreigner or native-born, when they blaspheme The Name they are to be put to death.

23 Then Moses spoke to the Israelites, and they took the blasphemer outside the camp and stoned him.


The Israelites did As The LORD Commanded Moses.

Stoning, or lapidation, is a form of capital punishment whereby a group throws stones at a person until death ensues. No individual among the group can be identified as the one who kills the subject, yet everyone involved plainly bears some degree of moral culpability. This is in contrast to the case of a judicial executioner. Slower than other forms of execution, stoning is a form of execution by torture.

In The Old Testament

In the New Testament

People who were almost stoned

In the New Testament:

The Cases of Punishment by Stoning In the Bible

For cursing or blaspheming : Leviticus 24:16

For adultery (including urban rape victims who fail to scream loud enough) : Deuteronomy 22:23-24

For worshiping other gods : Deuteronomy 13:5-10

For witches and wizards : Leviticus 20:27

For giving your children to Molech : Leviticus 20:2