JESUS(Yeshua, Joshua) Came to Joshua As The Commander of The Army of JEHOVAH


1Now when all the Amorite kings west of the Jordan and all the Canaanite kings along the coast heard How The LORD Had Dried up the Jordan before the Israelites until they had crossed over, their hearts melted in fear and they no longer had the courage to face the Israelites.

Circumcision and Passover at Gilgal


2At that time The LORD Said To Joshua,

3So Joshua made flint knives and circumcised the Israelites at Gibeath Haaraloth.

All those who came out of Egypt—all the men of military age—died in the wilderness on the way after leaving Egypt. 5All the people that came out had been circumcised, but all the people born in the wilderness during the journey from Egypt had not. 6The Israelites had moved about in the wilderness forty years until all the men who were of military age when they left Egypt had died, since they had not obeyed The LORD. For The LORD Had Sworn To them that they would not see the land HE Had Solemnly Promised their ancestors to give us, a land flowing with milk and honey. 7So HE Raised Up their sons in their place, and these were the ones Joshua circumcised. They were still uncircumcised because they had not been circumcised on the way. 8And after the whole nation had been circumcised, they remained where they were in camp until they were healed.

9 Then The  LORD Said To Joshua,

“Today I Have Rolled Away the reproach

of Egypt from you.”

So the place has been called Gilgal to this day.

10On the evening of the fourteenth day of the month, while camped at Gilgal on the plains of Jericho, the Israelites celebrated the Passover. 11The day after the Passover, that very day, they ate some of the produce of the land: unleavened bread and roasted grain.

12 The manna stopped the day after they ate this food from the land; there was no longer any manna for the Israelites, but that year they ate the produce of Canaan.

The Fall of Jericho


13Now when Joshua was near Jericho, he looked up and saw


Joshua went up to HIM and asked,


“Are YOU For us or For our enemies?”

“But As Commander of The Army of 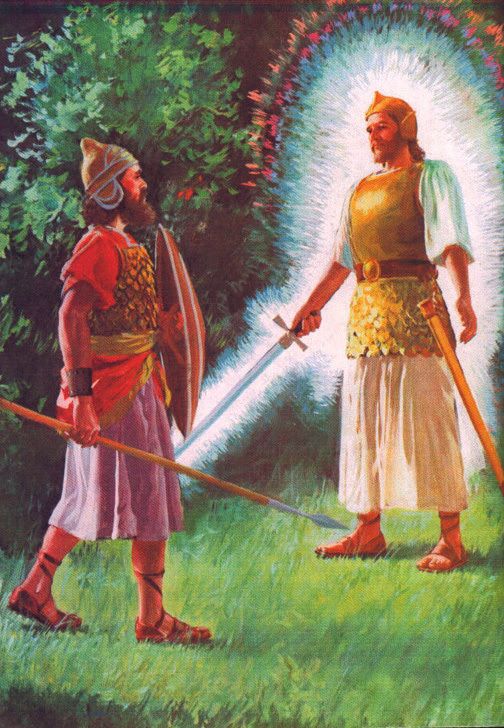 Then Joshua fell facedown to the ground in reverence, and asked HIM,

“What message does my LORD Have For HIS servant?”

15The Commander of The LORD'S Army Replied,

“Take off your sandals, for The Place

where you are standing Is Holy.”


And Joshua did so.

WHO IS THE CAPTAIN OF THE ARMY OF JEHOVAH?

“Take off your sandals, for The Place where you are standing Is Holy Ground.”

At this, Moses hid his face, because he was afraid to look at GOD.

In these last WORDS of The Captain, there is a Command,

“Remove your sandals,” and an explanation, “for the place

where you are standing is Holy.”

Removing the sandals was a sign of servanthood and a sign of respect and submission. And the declaration of this place of encounter and revelation as holy ground calls attention to the special import of what Joshua had just learned and experienced.

GOD Is not only The HOLY ONE in our redemption through the provision of the Suffering SAVIOR, but HE Is The HOLY ONE in our warfare through the Victorious SAVIOR. We can only enter into the battle so that we experience GOD’s Deliverance when we remove our sandals and submit to His Authority and His Presence and Power. Here we see that the warfare of the Christian is a holy calling, but also a Divine undertaking accomplished in those who humble themselves under the Mighty Hand of GOD.

“Humble yourselves, therefore, under the Mighty HAND of

GOD, that HE May Exalt you at the proper time, casting all

your anxiety upon HIM, because HE Cares for you.”

In this passage, Joshua had an encounter with The LIVING CHRIST,  The LOGOS, the Very Revelation of GOD. It was an encounter that lifted a great burden from his shoulders. We all see how this illustrates how much we each need to be in The WORD with a listening ear so GOD Can Teach us the things we need to hear.

Joshua, standing and perhaps also walking about the city of Jericho studying what lay before him and weighed down with the burden of his responsibility, is so very much like us today! We see the things we believe GOD Has Called us to do, but we are so prone to activity and running ahead more than we are to worship and inquiry from The LORD. Is our lifestyle such that it sends us out into battle mindful of The LORD and WHO HE Is to our every move, mindful of those principles of HIS WORD that must guide our every thought and step and fortify us with the comfort of GOD?


We need to look up and listen to the Commander

over the battles or tasks that lie before us.