JESUS IS Our GREAT HIGH PRIEST In The Heavenly Sanctuary

The Priests Begin Their Ministry

1On the eighth day Moses summoned Aaron and his sons and the elders of Israel. 2He said to Aaron, “Take a bull calf for your sin offering and a ram for your burnt offering, both without defect, and present them Before The LORD. 3Then say to the Israelites: ‘Take a male goat for a sin offering, a calf and a lamb—both a year old and without defect—for a burnt offering, 4and an ox and a ram for a fellowship offering to sacrifice Before The LORD, together with a grain offering mixed with olive oil.

For Today The LORD Will Appear to you.’ ”

5They took the things Moses commanded to the front of the tent of meeting, and the entire assembly came near and stood Before The LORD.

“This Is What The LORD Has Commanded you to do, so that

The Glory of The LORD May Appear to you."

8So Aaron came to the altar and slaughtered the calf as a sin offering for himself. 9His sons brought the blood to him, and he dipped his finger into the blood and put it on the horns of the altar; the rest of the blood he poured out at the base of the altar.

10On the altar he burned the fat, the kidneys and the long lobe of the liver from the sin offering, As The LORD Commanded Moses; 11the flesh and the hide he burned up outside the camp.

18He slaughtered the ox and the ram as the fellowship offering for the people. His sons handed him the blood, and he splashed it against the sides of the altar. 19But the fat portions of the ox and the ram—the fat tail, the layer of fat, the kidneys and the long lobe of the liver— 20these they laid on the breasts, and then Aaron burned the fat on the altar. 21Aaron waved the breasts and the right thigh Before The LORD as a wave offering, as Moses commanded.

22Then Aaron lifted his hands toward the people and blessed them. And having sacrificed the sin offering, the burnt offering and the fellowship offering, he stepped down. 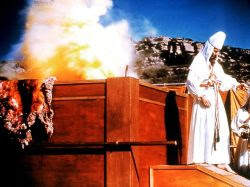 23Moses and Aaron then went into the tent of meeting. When they came out, they blessed the people; and

The Glory of The LORD Appeared to all the people. 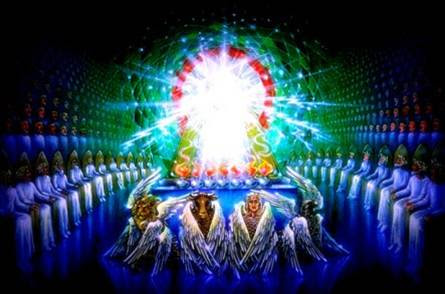 24Fire came out from the Presence of The LORD and consumed the burnt offering and the fat portions on the altar.

And when all the people saw it, they shouted for joy and fell facedown. 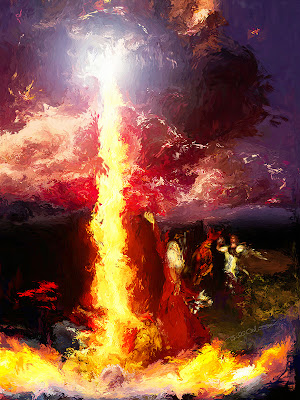 The directions in these sacred things were still given by Moses, the circumstances being extraordinary. But he was only the medium of communicating the Divine Will to the newly made priests. The first of their official acts was the sacrifice of another sin offering to atone for the defects of the inauguration services; and yet that sacrifice did not consist of a bullock—the sacrifice appointed for some particular transgression, but of a calf, perhaps not without a significant reference to Aaron's sin in the golden calf [Exodus 32:22-24].

Then followed a burnt offering, expressive of their voluntary and entire self-devotement to the Divine Service. The newly consecrated priests having done this on their own account, they were called to offer a sin offering and burnt offering for the people, ending the ceremonial by a peace offering, which was a sacred feast. This injunction, "to make atonement for himself and for the people" (Septuagint, "for your family"), at the commencement of his sacred functions, furnishes a striking evidence of the Divine origin of the Jewish system of worship.

In all false or corrupt forms of religion, the studied policy has been to inspire the people with an idea of the sanctity of the priesthood as in point of purity and favor with the Divinity far above the level of other men. But among the Hebrews the priests were required to offer for the expiation of their own sins as well as the humblest of the people.

This imperfection of Aaron's priesthood, however, does not extend to the Gospel dispensation:

For our Great High Priest, JESUS CHRIST WHO Has

Entered for us into “the True Tabernacle,” "knew no


A flame emanating from that brilliant light that filled the holy place flashed upon the brazen altar and kindled the sacrifices. This miraculous fire—for the descent of which the people had probably been prepared, and which the priests were enjoined never to let go out (Leviticus 6:13)—was a sign, not only of the acceptance of the offerings and of the establishment of Aaron's authority, but of